Are Tattoos Self Mutilation? I Prevent Self-Injury with Ink 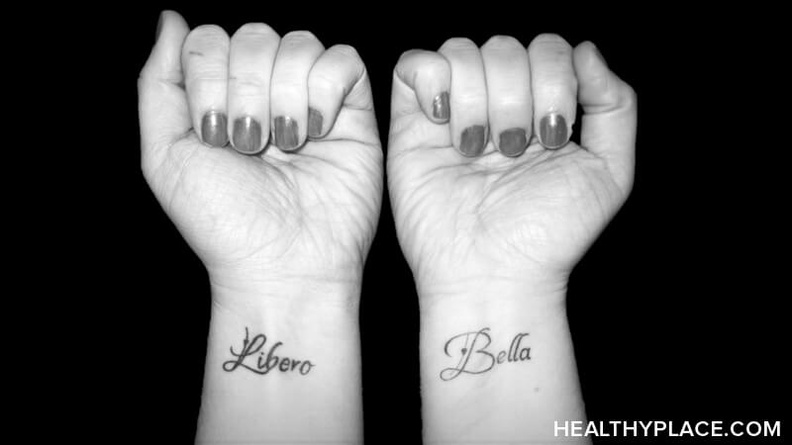 Are tattoos the same as self-mutilation? Let's face it, tattoos do hurt, and so does self-harm. But does it mean they are the same? Having done both, I can assure you they are unlike each other, even if both are associated with some level of pain.

Not all people are fond of tattoos, and I can understand why. Tattoos are permanent and painful, and it hurts even more to laser them off if you change your mind. Most ink lovers, though -- myself included -- think long and hard about their body art. It often has a special meaning to the person who decides to get it.

It is not uncommon to use tattoos as a cover-up for scars. It can be a great way to turn something that makes us feel ashamed, guilty, or ugly into an artistic expression of beauty, bravery, or courage. Most of the time, though, it's merely an aesthetic choice, and it should be respected as such.

If tattoos do hurt, and it's something ink lovers willingly do to themselves, is it fair to liken tattooing to self-injury? Besides the apparent artistic value, there is also the intention that counts. It is essential to distinguish between two completely different sources of motivation behind self-harm and tattoos:

Can Self-Harming Be Cured with Tattoos?

While a tattoo won't stop you from self-harming completely, it could help prevent self-injury or stop the urge to self-harm certain areas. For instance, I decided to get a tattoo on my left inner forearm, which was where I would usually cut or scratch myself in my darkest moments. I wanted to adorn it with something that would become my symbol of hope, strength, and my lifelong passion for music. I needed a reminder that I can -- and I will -- be happy again, even if I see no light at the end of the tunnel. So I got a watercolor musical symbol known as the treble clef.

I can proudly say that it's been over two years since I last self-harmed, and while my scars have since faded, my ink is still here to remind me that I am strong. I have prevailed. A tattoo may be an insignificant step for some, but it was an important milestone on my path to self-harm recovery.

Do you think that getting a tattoo is self-mutilation? Why or why not? Share your thoughts in the comments.

APA Reference
Halas, M. (2020, May 18). Are Tattoos Self Mutilation? I Prevent Self-Injury with Ink, HealthyPlace. Retrieved on 2022, August 17 from https://www.healthyplace.com/blogs/speakingoutaboutselfinjury/2020/5/are-tattoos-self-mutilation-i-prevent-self-injury-with-ink

Introduction to Martyna Halas, Author of 'Speaking Out About Self-Injury'
Can Self-Harm Be Emotional?
Mansplane
June, 10 2022 at 8:43 am

Tattoos are a form of self-mutilation! Self-mutilation is not about the pain it's about the CONTROL PERIOD. People who participate in self-mutilation will almost universally tell you that the control compels them to do so. In a world where we cannot control most things choosing and picking out a tattoo that goes on your body is an incredibly addicting and rewarded feeling to someone that might be on the spectrum of self-harm. Start being honest with yourself on why you seek tattoos and in my opinion seek control in any areas that don't jeopardize your body.

Hi,
Thanks for your comment. I'm not the author of this post, but since I'm writing here now, I'd like to offer a reply anyway. And you're right, for many people, self-harm is very much about having control when you feel like everything else is absolutely out of control. And I can absolutely imagine that yes, for some people, tattoos might do more harm than good in the long run.
But not everyone's experience of self-harm, or recovery, is the same. My own experience was less about control than about feeling like I deserved it. Like it made me stronger, or braver, somehow to suffer in silence than open up to people about what I was going through. Yes, control played a role—I was attempting to manage my emotions in an unhealthy way—but I don't feel, in my case, that it was the main driver. And I might have considered tattoos, myself, were it not for other medical issues preventing me from being able to safely get them done. I don't see myself being addicted to tattoos, though of course, I'll never know for sure.
That being said, thank you for sharing your opinion as well. It's important to be able to talk about these things, even to debate them at times, and as I said, I do think you raised a very good point that tattoos are not a suitable option for everyone. It's something I will definitely keep in mind when writing future posts.
Thanks,
Kim