Halloween Mental Health Stigma and How to Avoid It 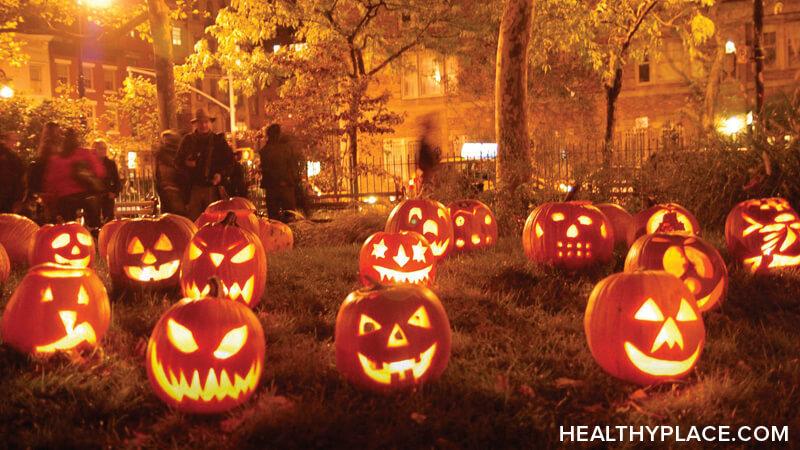 Halloween mental health stigma can be especially harmful and offensive. For some reason, many people still believe "asylum" themes are appropriate for their haunted houses and costumes like "escaped mental patient" are fun because they get to wear a straightjacket. Maybe it makes me a stick in the mud, but I believe stigmatizing mental illness in your Halloween celebration only serves to ostracize and insult an already vulnerable group of people, and it is time for it to end.

If you live with a mental illness, you know that it can be very scary, but not in the fun Halloween sort of way. It is personal torture, a hell that lives only in your mind and uses you against yourself. Straightjackets and asylums don't very accurately convey these constructs though. I would argue that mental illness themed Halloween spectacles are scary because of how distinctly "other" the mentally ill are made out to be.

At Halloween, the mentally ill are scary because they're different, their brains function in unknowable ways that are definitively different from "normal" people. They're scary because they're unpredictable, but it's still fun because don't worry, you could never be like them. This makes the mentally ill comparable to other unknowably different entities, like zombies or ghosts. Non-human.

This dehumanizing attitude is incredibly harmful and painful to the mentally ill community. Even though our brains do work differently from the norm and can often produce some frightening mental symptoms, we are very much still human, and we need to be treated as such. Those with mental illness have a long history of being treated like animals, or worse, abominations that shouldn't even exist. Let's not continue this cruel tradition with costumes and themes that perpetuate this Halloween mental health stigma.

How You Can Fight Halloween Mental Health Stigma

There are countless ways to fight mental health stigma this Halloween. Simplest of all, you can avoid costumes and party themes that use mental illness as a scare tactic or entertainment factor. If you want to take it one step further, you can discourage your friends and family from partaking in these stigmatizing spectacles as well. Make it clear that you aren't interested in attending any parties or haunted houses that are themed around mental illness. It might be a little scary at first, especially if your friends or family don't see anything wrong with it, but each voice that speaks out against Halloween mental health stigma adds to our collective volume and eventually leads to real change.

APA Reference
Griffith, M. (2019, October 10). Halloween Mental Health Stigma and How to Avoid It, HealthyPlace. Retrieved on 2023, February 6 from https://www.healthyplace.com/blogs/recoveringfrommentalillness/2019/10/halloween-mental-health-stigma-and-how-to-avoid-it