3 Reasons People Die by Suicide When They're Mentally Ill 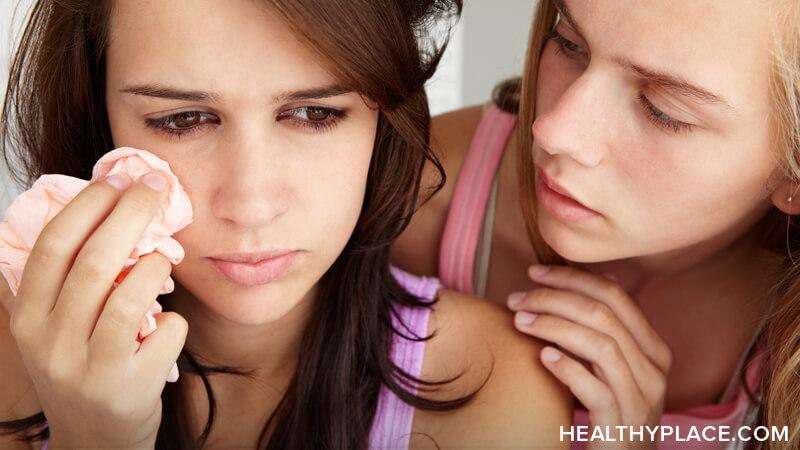 People Who Die by Suicide Have Their Reasons

Three major reasons people die by suicide while living with a mental illness are to escape from symptoms, delusions about one's mortality, and an overreaction to extreme stress.

Reason for Suicide #1: Escape from Symptoms

Most people who die by suicide don't want to die; they want to feel relief from their symptoms such as an overwhelming sadness or hearing voices. When these symptoms are intense and chronic, it may seem like they'll never end, and suicide may seem practical. The person wants to feel better, and belief in an afterlife may fuel the decision to end his/her life. Typically, whenever I have seriously considered suicide, it has been to escape from symptoms.

It is a myth that talking about suicide encourages it. Talking about it may very well save the person's life.

I've attempted suicide three times and have known four people who've died by suicide. Each time, for me anyway, it has been preceded by intense psychiatric symptoms. Some people will do anything to escape from the symptoms--including rash measures (Cause of Death: Bipolar Disorder, Mental Illness). The best way to fight this is to get someone who's been there to talk to the person--when one person who's survived it says it gets better, the person considering suicide is more likely to listen. And it usually does get better--treatment does work, even if it takes a while.

Sometimes suicides are unintentional. The person did not intend to die. Maybe it was a cry for help that went horribly wrong, or the person snapped out of it after making the attempt, or the plan was more lethal than calculated. But whatever the reason, the person did not think he or she would die, usually because of delusions about one's mortality.

For example, in 2000, I attempted to set myself on fire. I have no clue why, and to this day I have no better explanation than, "It seemed like a good idea at the time."

I had no intention of dying, even though I very well could have. I simply wanted to self-injure in a bad way and setting myself on fire made perfect sense. Had it not been for the timely intervention of the police, I could have died simply because I didn't think I could.

If it reaches this point with the person, you probably won't be able to reason with him or her and should call his or her treatment team or the police as quickly as possible. I'm not a fan of calling the police on people in crisis because it can end badly, but telling the police the person has a mental illness, asking them to send an officer with mental health training, and telling the police what scares the person may make the difference between a suicide by cop and a life-saving hospitalization.

Stress is a major factor in mental illness, whether it is the cause or a symptom. The more extreme the stress, the more likely the person is to have a negative reaction, up to, and including, suicide. Some examples can be worrying over one's sexuality, joining the military, divorce, or watching your life's dream go up in smoke. Whatever the stress, suicide is an overreaction because the extreme stress is temporary. The best way to fight extreme stress is for people to intervene until the danger is past. Sometimes that can be a simple conversation, other times hospitalization is best.

The people I've known who've died by suicide all had intense life stressors present at the time of their deaths. To them, suicide seemed logical, when to those of us left behind, it was an overreaction to a long-lasting but still temporary problem.

And ultimately that's what suicide is--an overreaction to mental illness. Help is available if you ask for it. You don't have to die to feel better.

APA Reference
Oberg, B. (2017, July 10). 3 Reasons People Die by Suicide When They're Mentally Ill, HealthyPlace. Retrieved on 2022, October 5 from https://www.healthyplace.com/blogs/recoveringfrommentalillness/2017/07/three-reasons-some-people-with-mental-illness-commit-suicide

i been diagnosed with multiple personality disorder and skitzopherenia.,
.Ive gone out on the disability pension. I was normal before my parents died and snapped with the stress of their death.
I live alone and i don't care what people think. i enjoy the voices in my head , they are painful sometimes and they tell me to kill myself. I've learned to play the piano and i listen to classical music,
I'm 54 years and need a good shag but thank god I'm not married anymore.

This is offensive. There is not always help. Don't give people false hope.

im scared all the time if im saying ronge doing living i have bi pol deprs and others and lupes and spine and rumatrod artherites cant spell ect ect i do see 2 doctors;;;

This is extremely important and needs to be discussed more. They are not selfish individuals. They are hurt and no one can experience what they are going through until put in their shoes. Thank you for shedding light on this subject.