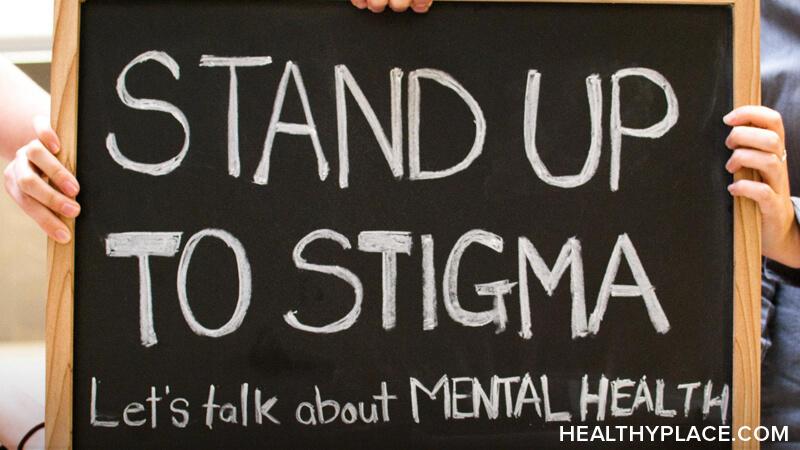 How do we end mental illness stigma on college campuses? I want to figure it out because I was diagnosed with several mental illnesses when I was in college, and the entire debacle was handled poorly. First, I was told to seek help through my church and submit fully to the Lord. When that didn't work, I sought help through the university's counseling center, only to be referred several different times to different agencies in the community before ending up with one of the staff psychologists back at the university. When I became suicidal, I was suspended from class, kicked out of the dorm, and all my professors were notified--and I had to meet with the dean to be re-instated. Stigma was definitely a problem--and here's how to end mental illness stigma on college campuses.

One psychology professor at my university told his class, "About half of you are here because you need a psychologist."

Whether or not that's true, education is critical in removing mental illness stigma. As a frequent line on the 1990s X-Men animated series goes, "People fear what they don't understand."

If people understand mental illness, they don't fear it as much, and they're less likely to stigmatize mental illness and people with it.

My university did not require a psychology class, which is a shame because I feel it would have greatly benefited all students--we needed to learn that this wasn't something you could pray away.

The university offered free mental health screenings once a semester--depression in the fall, anxiety in the spring. This is woefully inadequate; they should be held at least once a month and for multiple mental illnesses. I believe that if colleges held free screenings frequently, students would be more likely to seek help. Since most mental illnesses manifest during the college years, it is crucial that we use that time to educate and inform people about the myths and realities of mental illness.

When I was first hospitalized during my sophomore year, I asked the admitting doctor if I should put down the university as able to get my records. He shook his head and said. "Not them. Trust me, you don't want them to know."

While I was in the hospital, the husband of the rugby coach was in the hospital with me--and he asked me not to tell anyone he was there because the university might retaliate against his wife. As I said earlier, since I was suicidal, I was suspended from class, kicked out of the dorms, and told, "That policy is there to help you."

When I returned to class, I was forced to present a note from the dean saying my reinstatement was conditional on my seeking therapy. Needless to say, this is not making it acceptable to seek help for mental illness on college campuses.

Universities need to let students know it's okay to seek help for a mental health condition. Unless there is an immediate danger to another person, a student with a mental health condition should not be suspended and evicted. A suicidal student should be given support and told that help is available, and they will not be punished for seeking help. Confidentiality should be honored; the student's professors should not be notified without the student's permission. A helpful policy might require mandatory counseling, but things should be determined on a case-by-case basis.

Interestingly enough, I later got a job at the campus paper as the health reporter. I got the director of the counseling center to admit--on the record--that the policy was more for the benefit of other students than the suicidal student. He also told me the local psychiatric hospital saw a lot of suicidal students that the counseling center never saw. Psychologists, not university bureaucrats, should design a policy on emotional emergencies--and it should consider the needs of the student with mental illness first.

Take a Medical Approach to Mental Illness on College Campuses

One of my professors told me, "You have a medical reason to take an incomplete in this class."

I told him I was fine and could finish the class--and I did, making an A. Looking back on it, he was one of the few professors who offered to be accommodating--he knew that mental illness is a very real condition, although he may not have known that my mental illness didn't make me less capable. He took a medical approach to my condition.

So those are three ways how to end mental illness stigma on college campuses. What are your ideas?

What It's Like to Hear Voices
3 Reasons People Die by Suicide When They're Mentally Ill
Lizanne Corbit
July, 5 2017 at 10:14 pm

This is an incredibly well thought out, insightful and helpful post Beautifully stated: "If people understand mental illness, they don’t fear it as much, and they’re less likely to stigmatize mental illness and people with it." No student should have to go through the journey of mental illness while also feeling isolated for it by their University. Wonderful to hear about your role on the paper and the truth it revealed. Hopefully more instances like this will occur anbd change will follow!