Grief and A Tale of Two Deaths

My maternal grandfather got cancer in the '80s, when it was a virtual death sentence. My family never discussed it. It was especially hard on my mother, who took the stress out on the children. To this day, she does not like Halloween (when he was diagnosed), Thanksgiving (the last holiday he spent with the family; he told us to go and eat the turkey instead of worrying about him and we children said our final goodbyes), and Christmas Eve (when he died). Things at home fell apart, and I became well acquainted with depression--to the point where a teacher said something. It took me years to even talk about it--it led to emotional abuse at home, where it was understood we would "get over it." 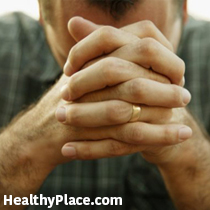 The death of my paternal grandmother was shortly after I graduated college. The family supported each other, and it didn't hurt as badly even though it was sudden. My boss gave me time off and sent flowers, and the town brought enough food to feed all 13 of us immediate family members several times over (as my cousin said, "We're Germans. We eat.") I left shortly after the funeral because I had a psychiatrist's appointment the next day. She said to me, "You look depressed. I'm increasing your medication."

I replied, "I just buried my grandma. I'm supposed to look depressed. If you're going to increase my medication for normal reactions to life events, this is just legal substance abuse."

It did not go over well, but I still stand by my statement. Sometimes grief becomes a mental health issue, but, sometimes, it doesn't. It depends on a number of factors.

Obviously, the relationship you had with the person will impact your grieving. But so will several other things, like the way he or she died, religious beliefs, and support from other family members and friends. Having lost friends to suicide, murder, disease, accidents, and natural causes, I can honestly say traumatic death is harder on the survivors and almost always requires mental health counseling. But it seems to be random when it comes to non-traumatic death.

Faith is a double-edged sword. It can help the loved ones to know the deceased is no longer suffering. However, as is especially true in the case of traumatic grief, faith can be sorely wanting. Questioning "why" can be frowned on in some circles, but sometimes we need to question "why." In addition, religion frowns on suicide--mourners at my friend's funeral remarked that it was good we could talk about it since they wouldn't be able to at most churches.

Support is crucial. I remember when a psychologist made an offhand remark to me about "the first year" of grieving. Seeing my puzzlement and concerned about my comment, "Aren't we supposed to be over it by then?", he explained that grief is a process that doesn't have a time limit or set order (Nine Common Myths And Realities About Grief). He also explained to me it was okay to talk about it--and I joined his grief support group to do just that.

How to Tell When Grief Requires Mental Health Help

I needed help after my maternal grandfather died, largely because my mother needed but did not get help after his death. As she cycled through denial, anger--a lot of anger--and depression; it seemed she would never accept it. She became emotionally abusive toward us kids, but maintained some semblance of a normal life for years. No one knew the hell that was going on at home. Eventually she came to terms with it, but not before some lasting damage was done to us kids.

Remembering the loved one will bring happiness and pain, sometimes within hours of each other--as my then-six-year-old brother observed after my maternal grandfather's funeral, "People go to the church and cry then come back to the house and have a party."

It is normal to reflect on the life of one who died, the circumstances leading up to the death, the death itself, and the funeral with mixed emotions. Obsessing, however, is not, and neither is constant sadness. Seek mental health help if grief begins to interfere with your ability to live your life.

You deserve to come to terms with the death of your loved one, and chances are that's what your loved one would want. Don't hesitate to ask for mental health help if you need it.

Three Things Suicidal People Don't Know About Suicide
Should Psych Patients Take Medication for Side Effects?
juanyelle
August, 10 2018 at 6:35 am

This is a very critical condition that the person was mentally disturbed, God bless him, and you are right because you are sharing the best information in your blog. Thanks for sharing this post.

It is a serious issue for everyone, at this time everyone has to live in a positive environment so they feel happy.

I was placed in the role of making all medical decisions when my father got sick, I watched him suffer, I loved my father it was very tramaic to see him suffer, and when it was time I had to make the decision to call in hospice. Next trauma lost of my job which was unfair, company realigned. Next trauma my love of my life my soulmate my partner is diagnosed with cancer. Which then we found out it would of been curable but he was misdiagnosed. Dealing with his cancer treatments and hospital stays and being his care giver and being in charge of all his medical decisions. Next trauma my mother my best friend had a heart attack, my decision to take her off life support. Next trauma my partners cancer has spread, watching him suffer call in hospice and having to tell him he had days to live and when it was time to tell him he needed to let go, he kept holding one he loved me and my autistic son so much, he kept saying I can't leave you and Bryan there will be no one to be there for you. I told my soulmate my everything that there was nothing he could do for us here the cancer was everywhere in his body except his brain and his body didn't work anymore it was time to let go, that he could watch over us when he was at peace. For four years I just kept moving from trauma to trauma. Now alone no family or freinds to calI or lean on. I never grevied my parents I just kept dealing with my partners cancer. Now that he has passed away, I'm trying to grieve all 3 losses alone, plus my job.I have been going to greif therapy and therapy. I can not cry I can not feel, I just keep reliving all the past trauma events. I don't sleep or function, I loss loose time I just disconnct. I'm stuck in the past not able to move forward, because my brain disasortated to survive the traumas. My brain can not understand that they are dead, Its like I'm in a nightmare that all this can't be true. I keep searching for help to unlock my mind to move forward, unfortunately I have not been able to find a professional mental health doctor or theripist to help me. I want help unfortunately if you need good mental health care you need to be very rich, for good mental health care costs are very expensive. Unfortunately I'm not rich. I want help which I could find peace again and the person I used to be.

Hi Cheryl,
I'm so sorry to hear about your situation. That must be very difficult, and I can't even imagine the pain you are feeling. Please don't give up on reaching out for help. Maybe try a different therapist if one is available where you live. Are there any support groups in your area? I know when my grandpa passed away a few years ago, hospice offered a lot of resources to my aunts. Maybe you could check in with your local hospice services and see if they can offer any help. I'm really glad you were willing to leave a comment. Hang in there and please don't give up.

Long story short I lost my dream job in 2011 ever since then my depression become very severe and sometimes clinical and there is no avoiding the memories the triggers are also everywhere it could be a smell or the weather it's unavoidable. This job was truly the happiest place on earth for me "Disneyland ". So how do I deal with this grief I can't shake?

Having a loved one or ones go is no doubt difficult and hard. It can lead to survivors guilt. Need to talk to family and friends as much as possible because you just never know when the day may arrive.