Should Psych Patients Take Medication for Side Effects? 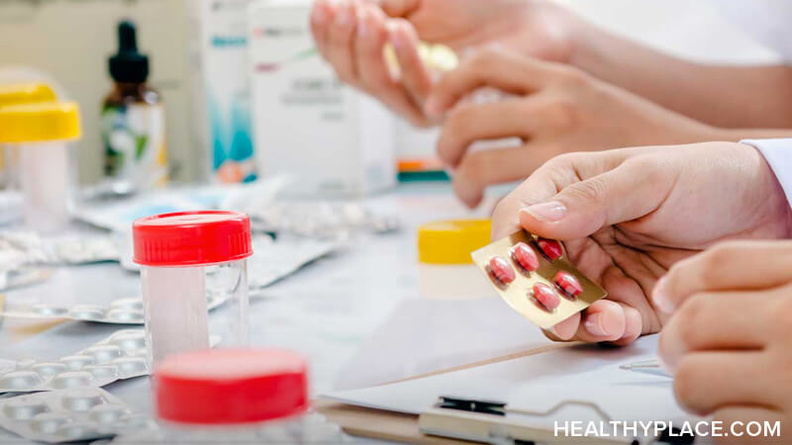 No -- Psychiatric Patients Shouldn't Take Medications for Side Effects

Some people say we should suck it up and suffer the side effect. I am not one of these people, but I understand their argument. The more medications we are on, the greater the chance of a drug-drug interaction. Interactions can range from mild and harmless to life-threatening. The doctor may not always be aware of these interactions when he or she prescribes the medication--I remember one case when a pharmacist refused to fill one of my prescriptions because it could cause a life-threatening reaction--something my psychiatrist either did not know or did not mention.

A paper on Medscape.com reads:

The vast increase in the number of new psychopharmacologic agents over the last 20 years has made more therapeutic options available, but it also has made treating patients more complicated. Prescribing practices, which include the concurrent administration of a variety of psychotropic drugs, have made the risk of drug-drug interactions more likely. Drug interactions are known to play a significant role in the incidence of adverse drug reactions (ADRs) both in the community and in hospitals. Reducing ADRs is a critical element in providing safe medication use for hospitalized patients. According to a recently published study, psychiatric medications can account for up to 50% of the ADRs for hospitalized patients with mental illness, many of which can be attributed to drug-drug interactions. ADRs resulting from drug-drug interactions leading to hospitalization are often preventable. It has been estimated that 26% of ADRs requiring hospital admissions may be due to drug-drug interactions. Even ADRs that are deemed to be "not severe" can have significant impact on patients with a psychiatric illness, as a growing body of evidence suggests a strong relationship between drug-drug interactions, treatment failures, and higher health care costs due to avoidable medical complications.

So there's the argument against medication for side effects. But the people who make this argument often aren't the ones who live with the side effects.

Yes -- Psychiatric Patients Should Take Medications for Side Effects 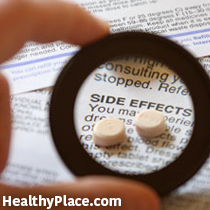 My medication for my restless leg syndrome is a prime example, as is my heart medication. My restless leg syndrome medication stops my legs from trying to run a marathon without the rest of my body at night, thus enabling me to sleep without relying on addictive sleep medications. A good night's sleep is vital to both mental and physical health--lack of sleep triggers my psychotic episodes. My heart medication usually stops palpitations and slows my heart rate down from above 120 at rest (a medical emergency). Without these medications, my health would be considerably worse.

Why More Research into Medication Side Effects Is Vital

Our knowledge of psychiatry is where our knowledge of cardiology was 200 years ago. We know the organ exists, we know it sometimes gets sick, and we know certain things make these illnesses better but have risks of their own due to our lack of knowledge about how they work (Why Are Psychiatric Drug Side-Effects So Severe?). We need more research into psychiatry so we can create psychiatric medications with fewer side effects--that way we don't have to ask the question "Should psychiatric patients take medication for side effects?"

APA Reference
Oberg, B. (2016, March 21). Should Psych Patients Take Medication for Side Effects?, HealthyPlace. Retrieved on 2020, June 7 from https://www.healthyplace.com/blogs/recoveringfrommentalillness/2016/03/should-psychiatric-patients-take-medication-for-side-effects

When Grief Becomes a Mental Health Issue
Is It An Anxiety Attack or An Asthma Attack?
Dr Musli Ferati
March, 28 2016 at 5:47 pm