Why We Shouldn't Be Afraid of Secular Counselors

Professionalism is one reason why we shouldn't be afraid of secular (non-religious) counselors. When the Duggar family discovered their son Josh was molesting his sisters and a family friend, they considered going to the police until a family friend told them "government" programs were not a good way to treat Josh's sexual misconduct (What Is Rape? Was I Raped?). As a result, rather than sending Josh to a competent therapist, they sent him to build houses for a few months. Sadly, fear and mistrust of secular counselors is common in the religious community. This mistrust stems from the belief that social workers will take your children away if you spank them or that the therapist will be hostile to a person's faith. Therapists are even derogatorily referred to as "alphabet soup," but we shouldn't be afraid of secular counselors.

Secular Counselors Are Nothing to Be Afraid Of 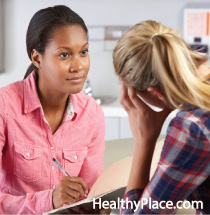 But there are many reasons why we shouldn't be afraid of secular counselors. For example, a secular counselor is required to be neutral to your faith. That doesn't mean they won't challenge unhealthy religious beliefs, such as that you just need to pray more, but it does mean that they won't try to convert you to secular humanism. Secondly, while anyone can call themselves a therapist (which has allowed the religious community to offer dubious counseling, such as conversion therapy), "alphabet soup," also known as licensing, means the therapist has had some training in how to address mental illness. Finally, a secular therapist is required to break confidentiality only in cases of abuse, sexual misconduct by a therapist, danger to self, or danger to others. Other than that, your secrets are safe. That's why we shouldn't be afraid of secular counselors.

APA Reference
Oberg, B. (2015, June 12). Why We Shouldn't Be Afraid of Secular Counselors, HealthyPlace. Retrieved on 2022, November 27 from https://www.healthyplace.com/blogs/recoveringfrommentalillness/2015/06/why-we-shouldnt-be-afraid-of-secular-counselors

Three Things We Need to Understand About Grief
Should Conversion Therapy Be Banned?
pamela
November, 1 2015 at 10:47 pm

watched the video too. Thank you

watched video too of the same, that was wonderful. Thanks

nice going through your article. Thanks

This is a hard nut to crack.

This is an interesting way to look at it. Separation of religion and professionalism.

If you're gonna make a video where people are actually gonna see you, the least you could do is comb your hair to make yourself look a little more presentable don't you think? Have you no self esteem at all?