Should Conversion Therapy Be Banned?

Should conversion therapy be banned? The controversial--and illegal for minors in some states--practice tries to change the sexual orientation of the patient. It's also known as reparative therapy, and is often practiced by fundamentalist Christians. It is opposed by all reputable medical organizations, from the American Psychological Association (APA) to the American Academy of Pediatrics. There is considerable debate over whether or not it is abusive--one California court put a minor in foster care after her mother sent her to a dubious psychiatric facility in Utah to cure her lesbianism--which leads to a question: Should conversion therapy be banned?

What Conversion Therapy Is

According to a 2009 report of the American Psychological Association, the techniques therapists have used to try to change sexual orientation and gender identity include inducing nausea, vomiting, or paralysis while showing the patient homoerotic images; providing electric shocks; having the individual snap an elastic band around the wrist when aroused by same-sex erotic images or thoughts; using shame to create aversion to same-sex attractions; orgasmic reconditioning; and satiation therapy. Other techniques include trying to make patients’ behavior more stereotypically feminine or masculine, teaching heterosexual dating skills, using hypnosis to try to redirect desires and arousal, and other techniques—all based on the scientifically discredited premise that being LGBT is a defect or disorder.

The current practice guidelines for the National Association for Research & Therapy of Homosexuality (NARTH), which is a group of therapists who endorse and practice conversion therapy in the United States, encourage its members to consider techniques that include hypnosis, behavior and cognitive therapies, sex therapies, and psychotropic medication, among others.

Homosexuality is not a mental illness. It does not impair functioning in daily life and does not actively hurt non-consenting others. Homosexuality is like the color of one's eyes--it just is, it can't be changed and no one knows why. For these reasons alone, a resounding "Yes!" should be the answer to "Should conversion therapy be banned?"

The Risks of Conversion Therapy 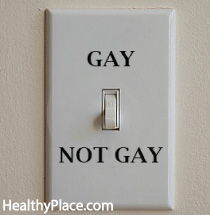 Any so-called "therapy" that seeks to alter something as ingrained as sexual orientation can only cause harm. We wouldn't get therapy to change our eye color or our height and weight. Those are things we have no control over and make us who we are. Sexual orientation is just another trait we cannot change. Therapy that deals with sexual orientation should help the person embrace his or her identity, not reject it.

The American Psychological Association notes in a report that Freud wrote a mother concerned about her son's sexuality that homosexuality is "nothing to be ashamed of, no vice, no degradation, it cannot be classified as an illness, but a variation of sexual function.” Freud also wrote that attempts to change an individual's sexuality would probably fail.

Therapy is supposed to help with these issues, not cause them. That is why the answer should be affirmative when we as a society ask "Should conversion therapy be banned?"

What Needs to Replace Conversion Therapy

I recently attended Circle City IN Pride Festival along with 99,999 of my new, good friends, about 20,000 of whom did not identify as lesbian, gay, bisexual or transgender (LGBT) but knew someone who did. The atmosphere there was very open and accepting. The APA reports that the best way to meet the needs of LGBT individuals is to:

Conversion therapy should be banned, at the very least for minors and, ideally, for all. I come out of a background that believes conversion therapy works (fundamentalist Christian), but I've looked at the science and adjusted my attitude accordingly. The Army cured what homophobia I had left. I now recognize that my religion (progressive Christian) keeps me, as a wise woman once said, too busy trying to love everybody to judge anybody. The very least I can do is try to make life a little easier for everybody.

APA Reference
Oberg, B. (2015, June 16). Should Conversion Therapy Be Banned?, HealthyPlace. Retrieved on 2023, February 8 from https://www.healthyplace.com/blogs/recoveringfrommentalillness/2015/06/should-conversion-therapy-be-banned

Why We Shouldn't Be Afraid of Secular Counselors
Are Psychiatric Medications to Blame for Mass Shootings?
paul
June, 24 2015 at 8:45 pm

Therapy programs that purport to “convert” lesbian, gay, bisexual, and transgender kids have caused immeasurable harm since they became prominent in the 1970s. Rigorous studies have shown again and again that efforts to change young people’s sexual orientation not only fail, but are also linked to suicidal behavior, depression, anxiety, drug use and risky sexual behavior.