Self-Harm and Dissociation: Are They Related? 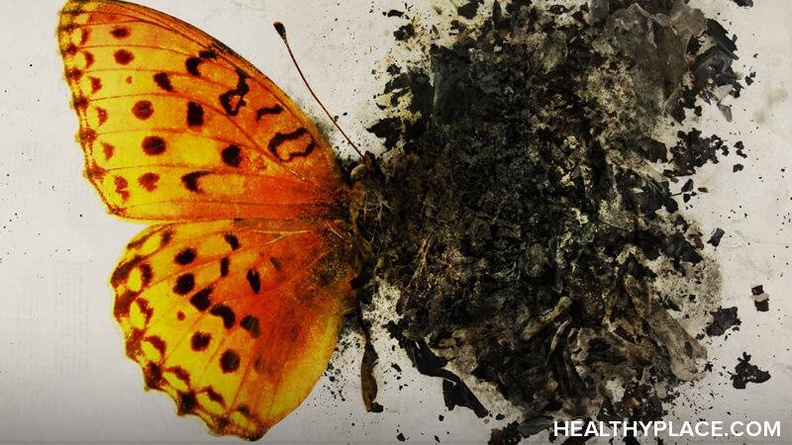 What part can dissociation play in self-harm? If you’ve never self-harmed, you probably can’t understand why anyone would do such a thing in the first place. The notion of inflicting physical pain on oneself can seem illogical and terrifying. However, self-harm can often travel with dissociation symptoms.1 This means the person who self-injures might feel physically numb or have no recollection of the event.

Self-Harm and Dissociation: My Experience

A few years ago, I had what many call a "nervous breakdown." After living with undiagnosed bipolar disorder for many years, I finally experienced an episode bad enough to send me to a hospital. Receiving this diagnosis made many of my life patterns clear to me, and I assumed self-harm was part of the condition. However, my psychiatrist thought it was a separate issue. When confronted about it, I couldn’t tell him why I did it. Actually, I had difficulty naming any emotions at all.

Did I feel sad, hopeless, or angry? Knowing what depression feels like first-hand, it didn’t seem like a valid reason in my case. I’ve learned to function in society and appear "normal" despite how I feel. No, this was something else entirely. I remember describing to my doctor that committing it felt like a blur. Sometimes I didn’t even realize that I’ve done it until a few minutes later, when my awareness finally came back. It was like an odd, out-of-body experience with a harrowing return to my physical self.

The Role of Dissociation in Self-Harm

Years later, I learned about dissociation. People can develop it for a variety of reasons. For instance, many sexual abuse victims dissociate from their bodies to distance themselves from the event and, later in life, the memories. Being a sexual assault survivor myself, I realized it happened to me, too.

How does self-harm fit into this picture? Sometimes trying to escape painful emotions can send you to the polar opposite of not feeling anything at all. To me, it meant exiting my body and committing self-harm in a desperate attempt to reconnect. It was as if my body longed for that piece of me that I rejected and refused to remember.

I’m still struggling with both sides of the spectrum. However, understanding where it comes from helps me mitigate future self-harm risks. For instance, I know now that I tend to dissociate under extreme stress. My mind doesn’t want to sit in my body and deal with the emotional pain, so I fall into self-harming behaviors as a means to escape.

Self-injury and dissociation are complex phenomena, but I feel many self-harmers experience these symptoms in some way. Perhaps when we understand what we’re trying to avoid, it could help us stay grounded and avoid potential triggers.

Do you think that self-harm and dissociation are connected? Has it ever happened to you? Let me know in the comments.

How to Help a Friend Who Self-Harms
Explaining Self-Harm Scars to Other People
Cathie
October, 20 2021 at 10:15 pm

Martyna, could we connect please? My almost 16 year old has expressed exactly what you have written above. I need to find some education for myself, but also further deep dive to understand how I can support them through this time. I would appreciate it very much - I've searched and this is the first time I have heard from someone telling the same story as my child. Thanks in advance, Cathie

Hi Cathie,
I'm sorry, but I don't believe Martyna is receiving updates about comments on the blog anymore, as she is no longer an active contributor. Please see her post below, where she talks about why she left, where she's going next, and where you can connect with her outside of HealthyPlace:
https://www.healthyplace.com/blogs/speakingoutaboutselfinjury/2021/8/goodbye-speaking-out…
She also has a wealth of past blog posts you can read through as well, and I am currently still posting on the blog if you have any questions or concerns you'd like to send my way.
Wishing you and your child all the best,
Kim