While it is true that many hospital patients are there against their will, that is the exception, not the rule (Involuntary Treatment - Commitment to a Psychiatric Hospital). Involuntary treatment is actually designed to keep the individual out of the hospital. Let's use Kendra's Law from New York as an example. Under Kendra's Law, which allows Assisted Outpatient Treatment, also known as Involuntary Outpatient Commitment, hospitalizations have gone down. According to MentalIllnessPolicy.org, people subject to Kendra's Law have generally done well. The stats: 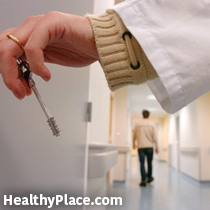 A 1998 study of an involuntary outpatient commitment program at New York City's Bellevue Hospital found that it cut hospital stays in half, from 101 days in the 11 months following discharge for those without court orders to 43 days of hospitalization for those with court orders.

Letting people go untreated until a crisis is what strains the hospital. Involuntary outpatient commitment not only keeps people out of the hospital, but it cuts hospital stays when they are hospitalized.

I used to be opposed to involuntary treatment except in the case of danger to others. While I'm still concerned about civil liberties, the fact is most patients who've received involuntary treatment, myself among them, have agreed with the decision in retrospect. According to MentalIllnessPolicy.org:

While about half of the mental health consumers interviewed said that the process of involuntary outpatient commitment made them feel angry and ashamed, the majority were pleased with the results. I'm one of them. I resented the process of being committed--still do as it's very degrading--but in hindsight, it was the right thing to do (Psychiatric Hospitalization: What I Wish I’d Known). It even became unnecessary as I realized how much better I felt on my medications, in treatment, and sober, and decided to comply with treatment.

Civil liberties are near sacred. I personally am torn on this issue, because while I have experienced involuntary treatment and found it helped, I want my rights. But we've taken our concern about civil liberties too far. As I often say, "In Indianapolis, you can be as mentally ill as you want as long as you're not dangerous." That means you can live in rodent-infested housing, wander the streets at three o'clock in the morning talking to yourself, have little to no food in your living space, and no one will intervene because you have rights. But how is it not an infringement of civil liberties to live like that? Humans have a right to get well.

Involuntary treatment should be carefully regulated--it should only be done when the individual can't take care of him or herself or is dangerous to self or others and meets these criteria repeatedly. If this can be done on an outpatient basis, great, do it on an outpatient basis. If we can keep individuals with mental illness on medication and in treatment long enough, most will decide to stay on medication and in treatment. So involuntary treatment is usually temporary.

At the end of the day, it's about what works--and involuntary treatment usually works.

APA Reference
Oberg, B. (2017, January 23). Three Myths About Involuntary Treatment for Mental Illness, HealthyPlace. Retrieved on 2021, May 10 from https://www.healthyplace.com/blogs/recoveringfrommentalillness/2017/01/three-myths-about-involuntary-treatment

You are so wrong. Involuntary treatment is a substitute for inadequate emergency screening for people with good insurance. I wish outpatient or at least a more than 3 minute assessment by an overworked arrongant ER physician was available to my son. Now he is dealing with the fallout from this doc’s incompetence and PTSD sustained from this stay at a private facility. I wasn’t given the option or allowed to provide informed consent. I guess they saw money coming. I do care. I love my child. I am left to pick up the pieces from this nightmare

You should consider that everyone who get this type of treatment is discredited, so they can’t actually say that the experience was negative without someone in the helping field saying the opposite.
I’m glad that your experience was positive. Most hospitals don’t use the outpatient programs much.
I wish that people would do more research on psychiatric abuse and logical fallacies committed in the evaluation process.

My husband works for a state psychiatric facility and he sees what involuntary treatment can do or not do. Unfortunately most patients are neglected by family and left to fend for themselves after discharge; which causes many of them to return to the hospital in a matter of months.