It's Time to Reform the Mental Healthcare System

It's time to reform the mental healthcare system. It's been time for years. While the George W. Bush and Barack Obama administrations made great strides, all that progress could be lost under the new administration (Mental Health Care [In A Perfect World]). Already, Congress voted to reinstate pre-existing conditions (which prior to the Affordable Care Act many insurance agencies used to refuse to cover an individual with mental illness or refuse to cover mental healthcare). Congress also voted to prevent Medicare from negotiating with drug companies to lower prices. And legislation that would have lowered drug prices was shot down--you may have seen the meme naming which politician voted against it and how much money they've received from pharmaceutical companies. President-elect Donald Trump needs to take action and reform the mental healthcare system.

The reason many of us need insurance is because we have a health condition. If insurance companies can deny coverage based on pre-existing conditions, then we're forced to pay everything out of pocket. This adds up quickly. As the saying goes, "Most people are only a paycheck away from homelessness."

The same applies to healthcare--most people are only an illness away from bankruptcy. I know this firsthand--my life savings were wiped out after I was hospitalized without insurance for 10 days, and bill collectors hounded me for years--and ironically enough, this was at a charity hospital.

I have Medicare and Medicaid now, and I live in fear of losing my benefits and having the whole nightmare happen all over again. I have to watch how much I make in a month because if I make too much, I lose my benefits, including Medicare and Medicaid, which currently cover almost all of my mental health treatment (most of my out-of-pocket expenses are medication). The Affordable Care Act gave me hope that if I lost my benefits, I could get insurance. Now that hope is gone.

However, even when there was the no pre-existing condition clause of the Affordable Care Act, mental health parity was generally the exception, not the rule. That, too, needs to change when the mental healthcare system is reformed. 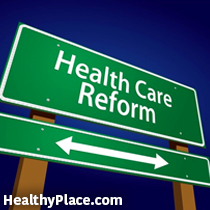 I think the lack of parity is due to one thing--mental health stigma. I remember one health sharing agent telling me everybody had bad days and I should try using herbs instead of medication. The problem with that is I'm not aware of any legal herbal antipsychotics. But that kind of ignorance is common. It's as if insurance companies think we can just snap out of it when the truth is it doesn't work that way. Like diabetes, we need constant treatment to live a healthy life.

Mental illness is treatable. Insurance companies need to recognize this. Yes, it's expensive to treat, largely due to high medication prices. Which leads to my next point: we need to rein in high drug prices to reform the mental healthcare system.

I read an interesting article in the Harvard Business Review that argued it was time to rein in high drug prices. The author of the piece wrote that our drug prices are high because the rest of the world has governments that regulate prices. Consequently, we shoulder the burden of pharmaceutical companies' research, development, production, and marketing. I think we can all agree that research and development should be encouraged, even government-subsidized. But according to this article, nine of the top 10 pharmaceutical companies spend more on marketing than on research and development.

Why do companies need to market their drugs? Since when does medical advice come from a television commercial? It tends to be one of three types of medication that are advertised: psychotropics, impotence drugs, and drugs designed to help quit smoking. People who need these medications usually know they need them, but should listen to their doctors instead of trying to self-diagnose and self-select a medication. We need to ban advertising. That would gut the marketing budget for drugs, which would lower prices. The pharmaceutical industry needs to be run as a service, not a business.

Those are my ideas to reform the mental healthcare system. What are your ideas? Leave a message in the comments.

APA Reference
Oberg, B. (2017, January 16). It's Time to Reform the Mental Healthcare System, HealthyPlace. Retrieved on 2022, June 26 from https://www.healthyplace.com/blogs/recoveringfrommentalillness/2017/01/its-time-to-reform-the-mental-healthcare-system