Halloween can be a fun holiday, but Halloween can also spread myths about mental illness. The main ones all have to do with stigma--that we are violent and unpredictable, that hospitalization is traumatic and abusive, and that there is no such thing as recovery. Mental illness is the only medical condition shown for shock value on Halloween--you never see haunted cancer wards, for example. Here are some myths Halloween spreads about mental illness and how to combat them.

If a person with mental illness is violent and unpredictable, which is rare, it's usually because they're not in treatment. A man with schizophrenia here in Indy frequently goes off his medications and wanders the streets shouting at people, sometimes while brandishing an ax. He's never hurt anybody, and if he would stay on his medications, he would be fine. He does not stay on his medications, however, because they make him sleep all the time. Sometimes the police intervene and take him to the hospital, where he's put on medication, but he goes off his medication as soon as he's free. Do people fear him? Yes. Is he violent and unpredictable? No--even off his medication he has never hurt anybody, and it's pretty easy to see what he's going to do. He mostly yells and screams, and while that is scary, it's not violent. 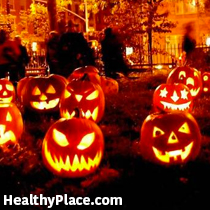 I have schizoaffective disorder, a mild form of schizophrenia. I'm a devout Mennonite, which means pacifism is part of my religious beliefs. As long as I stay in treatment, I will continue to be non-violent and relatively predictable--and my life is an argument that we're not violent and unpredictable. This is just a myth that is spread about mental illness around Halloween.

There is some truth in this myth. Hospitalization can be traumatic, especially when you don't know what to expect. And some "treatments," such as restraints or seclusion, can be traumatic and can be abusive. But on the whole, psychiatric wards are pretty boring places with a lot of routine. Yes, it gets exciting when someone goes off, but that's usually dealt with quickly and professionally. Most of the time staff de-escalate the situation instead of responding with force. Abuse, while it does happen, is rare. And staff generally do the best they can to help. The idea that hospitalization is always abusive is a mental illness myth often seen at Halloween.

I've been in a traumatic and abusive hospital, and I had ways to fight back. Every state has a Protection and Advocacy office that investigates allegations of abuse at hospitals, and the information is frequently posted in a space where everyone can see it. You can also contact the state health department, the hospital regulatory board, Medicare, or Medicaid. Thankfully, I've only had to do this twice--most of my hospitalizations have been relatively uneventful and helpful. I haven't committed suicide and I'm sober--that is proof that hospitalization can work.

Recovery is real and possible. While it means different things to different people, most people with a mental illness do get better. I was written off as a hopeless case who'd never be able to hold down a job and would circle between institutions and living in my parents' basement. This has not been the case. Thanks to hard work and taking a chance on experimental treatment, I've made it to a point in my life where I live on my own and run a small freelance writing business. While I've been in partial hospitalization settings a few times over the past few years, it's been several years since my last hospitalization. I've even had a book published. If I can recover, so can other people.

While recovery may not mean complete remission of symptoms, it may be something as small as being able to do the laundry without issue or something as big as not being chronically suicidal. Recovery may mean that you still have symptoms but can function in life. It's a mental illness myth that there is no successful treatment--successful treatment exists. You just have to find it. Do your homework on treatment methods and choose the one you think will work best for you. Case in point, dialectical behavioral therapy (DBT) did not work for me, but schema therapy did. I moved across county lines to get this treatment. Do whatever it takes to get better.

Abuse and Consent--Donald Trump and 50 Shades
Stages of Grief and Recovery After a Sudden Death
Kenny
November, 2 2016 at 6:25 am