Are Psychiatric Medications to Blame for Mass Shootings?

In response to the recent shootings in South Carolina, Perry said.

I think there’s a real issue to be talked about: It seems to me — again, without having all the details about this one — that these individuals have been medicated. And there may be a real issue in this country, from the standpoint of these drugs, and how they’re used.

One out of four Americans will be diagnosed with a mental illness at some point in their lives. If psychiatric medications were a factor in mass shootings such as the domestic, racist, terrorist attack in South Carolina, we'd see considerably more mass shootings. 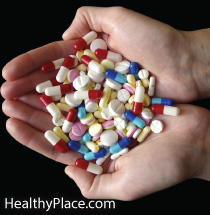 The problem may be that psychiatric medications are too effective. Without treatment, many of the shooting suspects either wouldn't have the energy to pull off a mass shooting or they would simply turn their anger inward and self-medicate with drugs or alcohol. Psychiatric medications fix the chemical imbalance--giving the alleged shooter the energy to carry out their plot. That's why it's vital that the treatment team watch for any signs of danger to self or others and intervene immediately. So it's not the medications--it's the underlying condition.

The black box warnings on antidepressants are there because the medications correct a chemical imbalance (which, incidentally, can be detected post-mortem) and give the individual the ability to act out what they really feel like. So, no, psychiatric medications are not to blame for mass shootings. It's a symptom of an underlying problem.

People with severe mental illness face enough stigma as it is. Blaming psychiatric medications for mass shootings only increases the stigma. And stigma, according to former U.S. Surgeon General David Satcher, is the main barrier to treatment.

Stigma leads others to avoid living, socializing or working with, renting to, or employing people with mental disorders, especially severe disorders such as schizophrenia. It reduces patients’ access to resources and opportunities (e.g., housing, jobs) and leads to low self-esteem, isolation and hopelessness. It deters the public from seeking, and wanting to pay for, care. … More tragically, it deprives people of their dignity and interferes with their full participation in society."

Stigma refers to a cluster of negative attitudes and beliefs that motivate the general public to fear, reject, avoid, and discriminate against people with mental illnesses. Stigma is widespread in the United States and other Western nations. … It leads to low self-esteem, isolation, and hopelessness. It deters the public from seeking and wanting to pay for care. Responding to stigma, people with mental health problems internalize public attitudes and become so embarrassed or ashamed that they often conceal symptoms and fail to seek treatment.

Case in point: Columbine happened when I was in college. My university, concerned that a student might do something similar, accessed the mental health records of all students who'd sought treatment through the university's counseling center and formed profiles. I was treated to a no-knock, no warrant search of my dorm room because I fit the profile. Try seeking help when you know something like that could happen.

What's to Blame for Mass Shootings?

The best answer to this question I've ever heard was from a Buddhist monk in Hawaii. "To every man is given the keys to the gates of Heaven. The same key also opens the gates of Hell."

A good person will do good things. An evil person will do evil things. Psychiatric medications, when used as needed, are just as much a tool as guns.

I was on a certain medication briefly. It did not help. I was very agitated at the time and started a fistfight--and I'm a pacifist. But the drug was not to blame--my underlying agitation was. The drug simply amplified it.

Are psychiatric medications to blame for mass shootings? The answer is no, no more than the guns.

APA Reference
Oberg, B. (2015, June 22). Are Psychiatric Medications to Blame for Mass Shootings?, HealthyPlace. Retrieved on 2022, August 19 from https://www.healthyplace.com/blogs/recoveringfrommentalillness/2015/06/are-psychiatric-medications-to-blame-for-mass-shootings

Should Conversion Therapy Be Banned?
What Are the Housing Rights of People with Mental Illness?
andrea
June, 29 2015 at 3:08 am

Isolation is the key word here, all communities need to encourage by what ever means possible public, spaces to " hang out" and not downplay the importance of that role to the entire community. Examples of yore: diners, record stores, video stores, fix it supply shops, barbershops all local owned with long term employees that KNOW people.

An article written in Slate magazine that's been getting around makes the point that mental illness is often inappropriately blamed at the expense of talking about real issues like hate, racism, and terrorism.

Hi.
I just came across this article online and was so angry to think that a person such as Mr. Perry would make such ignorant and insensitive remarks. As a person who suffers from mental illness ( Anxiety and Depression), I am insulted and offended. He needs to read up on mental illness and perhaps spend some time with a sufferer. Then, perhaps he won't be so ignorant!