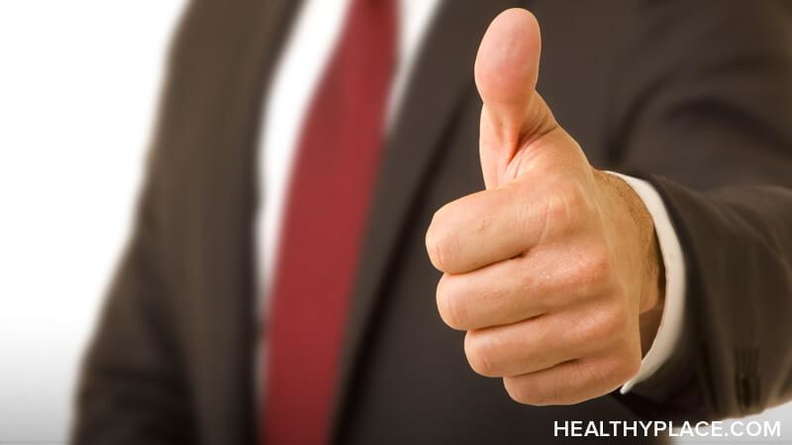 Those of us in mental health recovery are often faced with the hardships our symptoms can cause us. It can be easy to get discouraged, to look at our progress in recovery and tell ourselves, “I’m never going to overcome this mental illness.”

Recovery: Why Should I Keep Trying?

We can feel like our symptoms are controlling us, and we may tell ourselves, “Recovery is a joke. It’s not even possible. Why should I keep trying?”

I suggest there are victories in recovery that sometimes we might overlook because they’re not major changes that others might notice. We, ourselves, might not even recognize our progress, and that can be dangerous for us.

Joey Santini (real person, name changed for privacy) struggles with posttraumatic stress disorder (PTSD), which sometimes manifests in an anger better described as rage. Joey describes this rage and how it can affect him on a daily basis: “I can go from 0 to 60 in one second,” he explains.

He describes road rage incidents where he would literally chase another vehicle for some perceived slight, understandably causing the people in the other vehicle to be frightened and alarmed. He relates that he rarely goes to public places because he is afraid his rage will reveal itself and cause upset to people around him.

Joey says he sometimes gets discouraged because these rage incidents have continued to haunt him.

He says over the years he has continued in therapy and medication treatment. “I feel I’ve done everything I could do to further my recovery over the years. I chose to take anger management classes on my own,” he said, explaining that he was convinced if he didn’t take the classes voluntarily, he would be forced to by the legal system in response to some rage-filled outburst in the community.

Still, Joey says he often feels discouraged about his recovery precisely because he’s tried so hard to do the right things in treatment, only to find the same old demons plaguing him at every turn.

A Ray of Hope in Mental Health Recovery

Then, one day, something happened that changed Joey’s entire view on mental health recovery, in general, and his own recovery, in particular.

Joey found himself in a familiar situation that had always triggered his rage. He was dealing with a large organization and seemed to be getting the runaround. One person would tell him he needed to do this or that, then when he would accomplish that, another section would say he needed to do some other thing. He could feel his fuse burning and he began to consider leaving to avoid a rage incident.

The Difference Between Assertiveness and Aggressiveness

But Joey remembered something he’d learned in his anger management classes: the difference between assertiveness and aggressiveness. Aggressiveness is active and open hostility, characterized by attacking. Assertiveness is to say what we need or want while respecting the needs and rights of others.

When the clerk told him he had another hoop to jump through, she said, “Is that okay?” Joey looked at her and calmly told her, “No, that is not okay.” He respectfully explained to the clerk why it wasn’t okay and asked her if there might be an alternative -- no rage and no hostility.

Joey had surprised himself. He wasn’t even aware that any of what he’d learned in treatment had even taken hold. The best part is that it worked. By simply explaining to the clerk why her previous suggestion wouldn’t work, she found a way to make it work and resolved his issue on the spot.

“This might sound stupid,” he says, "but I walked away from there nearly dancing a little jig.”

Such a small thing. Such a huge victory.

So if you find yourself discouraged in recovery and wondering why you should continue, you might notice that your mental health recovery has been playing out in small victories all along.

Those in mental health recovery need to realize that any victory, big or small, is still a victory. Never give up.

3 Lessons About Mental Illness My Physical Illness Taught Me
Mentally Ill In Public: How Sick Is Too Sick?
St. Louis Behavioral Medicine Institute
March, 20 2015 at 10:56 am

At times recovery may seem completely hopeless, but there is always a chance for a road to recovery. It takes a village, true but it can be done.

Great post! The road to recovery is not linear. It comes with many bumps in the road and this post really hit the nail on the head. Thanks for sharing!

Thanks for the kind words.