Mentally Ill In Public: How Sick Is Too Sick?

I have a new neighbor who scares me. He likes to wander the halls, yelling at nobody and at least once threatening criminal activity. I'm scared it could turn violent. I lock my door, keep a knife handy and try to ignore his rants. People have told me to call the police and try to get him admitted to the psych ward. But the staff at my apartment assure me he's sick, not violent, and there's nothing they can do. Which means there's nothing I can do. So how sick is too sick to be in public?

The Mentally Ill Have the Right to Live in the Community 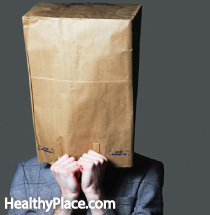 One thinks he is the world's greatest athlete. He frequently boasts of being the Oilers' quarterback and field goal kicker. He has five Super Bowl rings and once scored 100 points in a game. He's also a professional wrestler specializing in submission holds, which has caused him to get in one fight that I witnessed, and he's a professional race car driver. He brags about how he loves to beat people up in his life, as an athlete. But because he's not a danger to himself or others, he's out in the community.

Another thinks he is a seraphim. He once showed me a picture of him as a child, claiming it proved he had clear hair and blue eyes. He also said "I just farted and the Holy Spirit came out my ***."

He got into one fight that I witnessed and claims he got in trouble with the law over a battery charge. But because he's not a danger to himself or others, he's out in the community.

Another is on house arrest. She has a hot temper and has threatened to cuss out staff for making her wait for her disability check. She'll cuss someone out for saying hello. But because she's not a danger to herself or others, well, you get the idea.

Why the Mentally Ill Are in Public

The Olmstead ruling decreed that:

. . . institutional placement of persons who can handle and benefit from community settings perpetuates unwarranted assumptions that persons so isolated are incapable or unworthy of participating in community life . . . confinement in an institution severely diminishes the everyday life activities of individuals, including family relations, social contacts, work options, economic independence, educational advancement, and cultural enrichment.

On the surface, this is a positive ruling. But in practice, it has resulted in many individuals being in the community when they are not in full control of their illnesses.

It would be unreasonable, it would be a tragic event, then, were the Americans with Disabilities Act of 1990 (ADA) to be interpreted so that states had some incentive, for fear of litigation to drive those in need of medical care and treatment out of appropriate care and into settings with too little assistance and supervision.

And that has occurred. Several years ago, the State of Indiana closed Central State Hospital, transitioning the patients into the community. I mentioned it during an interview with a mental health advocate, and she said, "People are dying because of this. They are dying slowly by losing their incomes, and their housing, and their ability to access health care. They are dying quickly by turning to other drug substances and suicide."

An investigation by a newspaper in Atlanta, where Olmstead originated, found similar unacceptable results.

Is it better to error on the side of caution?

"Danger to self and/or others" varies, according to the person making the decision. Some mental health professionals include self-injury, while others will require an actual suicide attempt. We need a clear standard. In addition to that, we need a clear standard of "gravely disabled--"some states have more stringent requirements than others.

Olmstead originally was to be carried out on a case-by-case basis. We need to consider what is in the person's best interests. Sometimes that may mean hospitalizing someone who's harmless but would benefit from hospitalization. We owe it to ourselves, as a society, to do the compassionate thing and step in before the situation deteriorates.

We need a long, hard look at new legislation.

APA Reference
Oberg, B. (2014, December 14). Mentally Ill In Public: How Sick Is Too Sick?, HealthyPlace. Retrieved on 2020, February 22 from https://www.healthyplace.com/blogs/recoveringfrommentalillness/2014/12/ill-in-public-how-sick-is-too-sick

Savor the Small Victories in Mental Health Recovery
Mental Illness: How Young Is Too Young to Diagnose and Treat?
Jesse Hunt
January, 7 2015 at 8:28 am

i find it heartbreaking that literally everytime I go out I come across someone severely mentally ill. They are always homeless, dirty, hungry and in poor health. They are hard to miss because they are usually shouting at passerbyers or just to themselves. They clearly need help and assistance. I live by a hospital and have witnessed the discharge of people who were too mentally ill to released in to society. How is it possible any kind of doctor could release such a patient. I myself am a high functioning mentally ill person. I've been too sick to be on my own and spent time at mental hospitals. The last one released me without caring I was no better than when I arrived. It was dishearting. I'm lucky enough to be high functioning and having the help of family and friends. I made it through. Clearly the people I see everyday need more help than being able to live in the community. They aren't living. They are barely surviving and suffering. A lot needs to change!

Is this a real post or are you trolling? I am genuinely asking, because if you're open to conversation, I am so glad that you asked the very group of people in question. As a person with serious mental illness that is not dangerous, but is guaranteed to surface in visible ways, that I cannot fully mitigate. Some of those "visible" symptoms or struggles are undeniably annoying as hell to those close by (though usually short term). I try to be the best neighbor I can, but I am always, always THAT neighbor. I also work closely with, and apart from that know and am friendly with, many people who are exactly the people you describe above. I would love to answer any questions you have.
You may be the first person (aside from a couple close, old friends, and aside from MH community/therapy) to ask me for input on my condition or on similar conditions. We're experts - and you'd be amazed how completely outdated and misunderstood even the concept of what severe mental illness is or could be among those who have no or little experience with it.
Anyway, yeah, feel free to ask whatever, but do keep in mind that this is how every person we meet feels about many of us, and we know it, we see it, and it hurts deeply. And it is terrifying. So touchy subject, for me at least.

When Depression Causes a Lack of Motivation
Noise Sensitivity: When The World Is Too Loud
Sadness vs. Depression: What's the Difference?
Is It Possible to Recover From Chronic Mental Illness?
Why Are Romantic Relationships with Mental Illness Hard?