What Does It Feel Like to Lose Someone to Suicide?

If you read enough of these blogs, you might know that I write what I feel. But this often involves a healthy mix of education and sarcasm. In line with my personality, I suppose. But this topic is different. Suicide lives in the darkest parts of my mind; places I cannot avoid but also want to remember. I want to remember losing my very best friend and my cousin to suicide. My favorite cousin. Maybe I should preface this by telling you it will be a bit raw. But suicide is raw. It hurts. And it hurts to write this.

Losing My Best Friend to Suicide 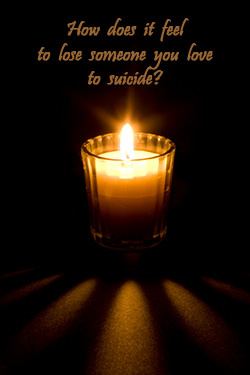 It was awful. I cannot explain it in words. I cannot explain it if you were to sit beside me and ask me. My face would go a little white and I might be at a loss for words. I would remember the color of his hair; sandy blond. And I would remember his smile and silly things like the brown leather jacket that was draped over my living room chair when we spent time playing cards in my living room.

I would tell you how difficult it felt to have a friend who hugged me, long and hard, and understood how hard it was to be young and live with serious mental illness. I would try to not to cry because I like to be strong and then I would remember the phone call.

Chris and I spent time in The Children's Psychiatric Hospital. He was diagnosed with schizophrenia and I was diagnosed with bipolar disorder. We were twelve-years old and we were scared but we had each other. And having each other made survival easier. But I thought Chris would keep surviving just like I was. He seemed happy enough. We went to concerts together and made dinner. We talked about mental illness and how hard it was to connect with people our age. But we had each other. Until he was gone.

The Phone Call That Made My World Black

I will always remember the phone call. His mother:

"Natalie, can you sit down?" I'm pretty sure the worst phone calls start this way. "Natalie... Chris completed suicide last night" I asked her what she meant. Of course he did not complete suicide. Last week, we made plans to go see our favorite band. We talked about our college classes and we smiled and we laughed and everything was just like it had always been. Just us. And just us was always absolutely perfect.

I responded, a shaking voice, "No, no he did not..." But he did. He no longer breathed. He no longer lived twenty-minutes away. He was gone. Gone. Gone. It was not possible. But soon I was at his funeral where his father read his letter requesting I attend the sprinkling of his ashes. Just me and his family. I recall this line from the letter, the opening line, written in black ink. Angry ink. "To my immediate family and Natalie Champagne." And me. Me?

I will not tell you how he did it. That does not matter. What matters is he is no longer here. He was quiet with his suicide, as most people are, but I still felt I could have done something. We all did.

Five-years have passed and I still look at pictures of us. How could he have always been smiling? Just days before he died? I still do not understand (Happiness and Depression: It's Possible to Feel Both). But I do believe suicide is not a selfish act. He was in pain. He was not thinking clearly. And now he is no longer here.

That was not my first experience with suicide.

Losing My Cousin to Suicide

I loved my cousin! Since I was a very little girl. He was so smart. He was a beautiful artist; his work hangs on my parents walls. When I visit them they sort of glare at me. The paint-strokes of suicide. The feeling that we could have done something.

My dad called me one day. He told me to sit down. I thought maybe one of my grandparents had died. But it was my cousin. Suicide. I hung up the phone and lay down on my bed. I was numb. Much to numb to cry. I just stared at the wall. I wondered if maybe I was next. After all, these people I loved, these people I really loved, they lived with mental illness. And they were gone now.

My cousin lived with a severe form of schizophrenia. He had never been well like Chris had. But he was always my favorite cousin. He taught me to draw. He explained how to sketch and to shade and to make coffee. And then he died. Just like that. Twenty-two years old; lovely blond hair and blue eyes. Blue like the ocean. His hands always stained with paint, with creativity, he was my idol.

Moving on After Losing Someone You Loved to Suicide

Can you move on after the suicide of a loved one? You can creep slowly to a better place. A place that is not black and scorching hot. A place I have arrived at. But it's hard. I can still see my friend holding me tight and I can still remember my cousins bright blue eyes and his beautiful paintings. And then I remember they are no longer here. But I am.

That's important to remember: If we have lost people in this awful way we can learn from it even though it hurts like hell and it never really goes away. It just gets better. Time has passed, and although I will never forget, I will always remember that if more services were available to them, if people who loved them were aware of the signs of possible suicide, they might be calling me any minute now.

But they won't because they can't. But I can answer the phone if a friend needs help and so can you. We can pick up the phone if we need help and we should.

I miss them. I really miss them a lot...

APA Reference
Jeanne, N. (2012, September 10). What Does It Feel Like to Lose Someone to Suicide?, HealthyPlace. Retrieved on 2022, August 8 from https://www.healthyplace.com/blogs/recoveringfrommentalillness/2012/09/what-does-it-feel-like-to-lose-people-you-love-to-suicide

Accepting the Word 'Antipsychotic'
Mental Illness: Why Do We Feel Alone in Our Struggle?
Linda
April, 2 2016 at 10:18 am

Grief/suicide became part of my life story. My husband had cancer and I took care of him for five years. I quite my job to be a full time caretaker. I have never regretted this decision. I knew he was going to die and I was prepared for that. What I was not prepared for was life without my husband. "who am I, and why am I here?" That thought never left me and because of my bi-polar disorder my entire thought was distorted, people would be better off if I was dead. One year after my husband died, I committed suicide. When I arrived at the ER, the doctors told my family that all of my organs had shut down and I would die. The were told to say good by to me. By the grace of God I did not die nor am I brain dead; I am happy, but I still have a bipolar disorder and it continues to be part of my life. When I go to bed will I wake up happy or sad? I've learned to live with this, and I know without doubt I will never try to commit suicide again. It devastated my family and left me with physical problems that cannot be cured; but I AM LIVE, and enjoy being a grandmother, mother, friend,all the benefits of being alive.