Anger or Rage Can Be Depression in Disguise 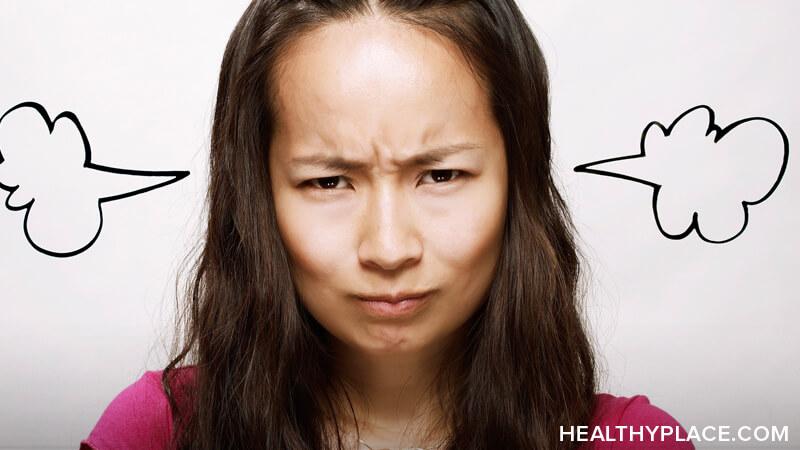 Anger or rage can actually be depression in disguise. I've learned this the hard way. Sometimes I walk around wanting to punch someone in the face because I'm so angry -- when I have absolutely nothing to be angry about. But the fact of the matter is, while the feelings of anger or rage are real, the cause is not always anger, per se, but depression. Depression has disguised itself as anger or rage.

Recently, Rizza Bermio-Gonzalez of the Treating Anxiety blog talked about anxiety becoming anger which made me think about a similar relationship between depression and anger. I've felt this relationship personally, and it's a clinically recognized relationship as well.1

Feeling anger while being depressed can be thought of as "angry depression." To me, this feels exactly like red-hot, sizzling anger or rage that I might feel in an extreme circumstance -- one that is so extreme it has never occurred in my life. It's an anger that is beyond anything I consider reasonable. Rage isn't a thing I feel -- it's a thing my bipolar depression feels.

And while external stimuli don't cause rage in me, I know they do for other people with bipolar disorder. These rages (sometimes called anger attacks) have been linked to depression and mania (irritation specifically being a symptom of mania).2

It's also worth noting that a depressed mood in adolescents and children can also manifest as an irritable mood.3

But My Anger or Rage Is Really Depression

The Reason Depression Can Look Like Anger or Rage

The feelings of anger and rage are, of course, just certain neurons flashing in the brain. That means that your brain can send out those signals errantly, much like it can send out symptoms of sadness (also in depression) irrationally. So the reason depression can look like anger or rage can simply be thought of as your brain being sick, as it is.

But I think there's more to it. I think that anger can be an easier or more acceptable feeling to emote and deal with. For example, if I'm so depressed I'm suicidal, I might take my life. If that depression manifests as anger, though, that risk is diminished. That can be thought of as the brain protecting itself.

Similarly, if I'm extremely depressed, I may have no energy and just want to cry all day. This means it's unlikely I'll leave the house or get any work done. If I'm angry instead, however, I have energy. It's a negative, horrible energy, but it's energy nonetheless. I can put that energy into completing work, running errands and so on. So, in this case, the brain is protecting my lifestyle. It's making it possible for me to maintain my life by creating an income so I can pay for the roof over my head.

And while people have no idea how to handle a person walking down the street sobbing from depression, everyone seems to be able to understand and work with an irritable, angry person. Irritation and anger are simply considered more normal than spontaneous waterworks.

Note: Some people do have significant anger or rage issues that fall outside the influence of depression and bipolar disorder, although mental illness may make the anger or rage worse.

Handling Anger or Rage in Depression

In my next post, I'm going to talk about why living in anger or rage in depression doesn't work and how you can handle depression that's disguised as rage or anger.

Tags: anger can be depression

APA Reference
Tracy, N. (2021, April 4). Anger or Rage Can Be Depression in Disguise, HealthyPlace. Retrieved on 2021, August 5 from https://www.healthyplace.com/blogs/breakingbipolar/2021/4/anger-or-rage-can-be-depression-in-disguise

I'm Fine, I Don't Need Bipolar Medication
Depression that Appears to be Anger or Rage -- How to Handle It
Lizanne Corbit
April, 6 2021 at 7:19 pm

Beautiful read and so helpful for numerous reasons. Depression can absolutely disguise itself behind anger or rage and that can be one of the trickiest masks for people to work with. Sadness is one thing but anger and rage tend to push people away or irritate them making it even harder for the person experiencing depression to get the kind of support they need.