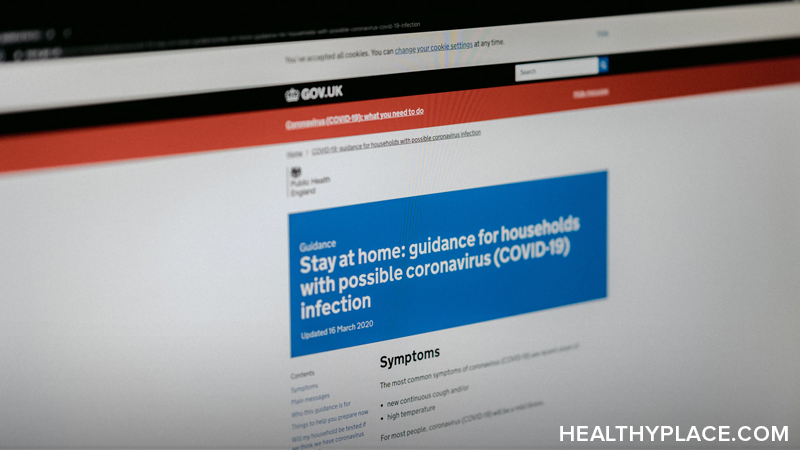 I believe there are real dangers to losing your bipolar routine during isolation. There are issues of work, school, socializing and more that are affected by social distancing; and any one of those things can interrupt a carefully planned routine. I know my bipolar routine has been lost during isolation due to the novel coronavirus, and I know it's hurting my mental health.

What Is It to Lose Your Bipolar Routine?

I talked to my psychiatrist yesterday and we laughed together after noting that, because of social isolation, people with mental illness can no longer do so many of the things that keep them well. People with mental illness have been told to socialize, get out of the house, do things to keep ourselves well over and over, and now that's exactly the last thing we can do.

For me, my bipolar routine includes walking to breakfast, working while at restaurants and seeing my friends -- and these are all things I cant do right now. So these things that were keeping me well are gone. I've lost my bipolar routine because of the isolation we're now all facing due to COVID-19. All that good advice for all those years and I can't even follow it if I want to. (I've written more about bipolar routine and its importance here.)

And losing my bipolar routine because of isolation feels like losing the glue that was holding my life and my brain together. It feels like I've lost everything I used to look forward to. It feels like I'm adrift. All the days seem the same. I feel like the definition of the word "isolated."

What Are the Dangers of Losing Your Bipolar Routine Because of Isolation?

A routine works to stabilize a life, and thus, stabilize a mood. The more routine your days, the more this positively impacts your mood disorder. Thus, when your life loses its routine, your mood stability may be lost as well. In other words, losing a bipolar routine means possibly losing a mood that allows for functionality. This is actually pretty dire. While the idea of a "mood fluctuation" doesn't sound that bad, if you have bipolar disorder, your "fluctuation" can be quite dramatic. I suspect the isolation will tend to result in either major anxiety for people or major depressions. I'm seeing a lack of stability, personally, and it's only been a week and a half. We're due for a whole lot more of this social isolation yet.

It comes as no surprise then, what I suggest doing if you've lost your bipolar routine is to create a new one. Unfortunately, any new routine would have to be enacted within the boundaries we now all face, and that's likely going to make it difficult. Nonetheless, a new bipolar routine can be found, however altered it must be.

I don't think people should get too pedantic with routine or you run the risk of it becoming an obsession, flexibility matters sometimes too, but a daily routine is important. Whether your routine involves trying out new recipes, talking on the phone or playing fetch with your dog, the more you take control over these little things, the more stable your days become and the positively your mood will react.