Bipolar Depression and Trying to Exercise 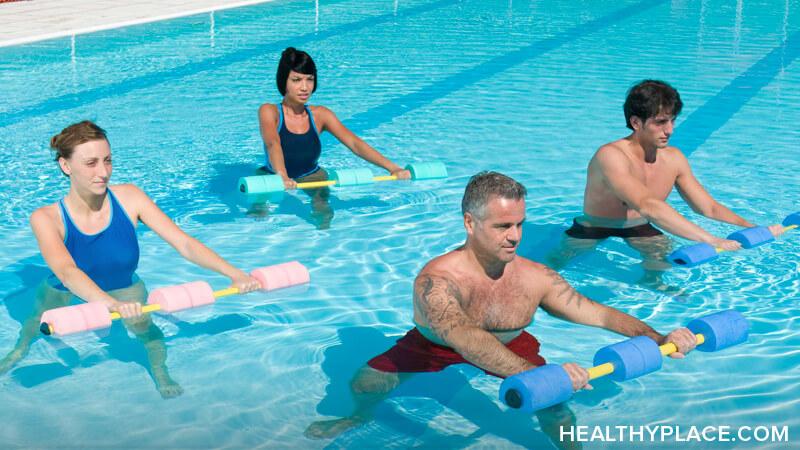 I’m stuck in a bipolar depression and yet, I’m trying to exercise. I’ve never been successful at this – ever. Now and then I have been on exercise programs, but I’ve hated every one and none of them have stuck. Not to mention the fact that getting my depressed butt out of the house to do anything is almost impossible. I have no energy and everything hurts all the time. Bipolar depression makes exercising almost impossible – but I’m hoping the truth is that it’s just “almost” impossible.

Benefits of Exercise and Bipolar Depression

Everyone knows that exercise is good for us. It has many benefits and we all know it. But so many of us – with mental illness of not – refuse to do it.

According to Jim Phelps MD, a noted doctor in the field of bipolar disorder, benefits of exercise for everyone include the following:

Additionally, for people with bipolar depression or other mental illnesses, the benefits of exercise include:

Now, most of the evidence in mood is for people with moderate major depression but, in my opinion, there’s no reason to think that most of this wouldn’t also be applicable to bipolar depression as well. Dr. Phelps has recommended exercise for his patients and says this:

. . . I’m the evidence-based treatment psychiatrist. I should be able to give up when you produce the evidence that in your case, sure enough, after a month of getting at least the 15 minutes described above [a walk], at least 5 days a week — there’s been no improvement in your mood or energy. I’d say that was a fair trial, just like we’d give an antidepressant.

In other words, exercise is worth the same amount of effort you would put into a drug trial. This mostly sucks, as all drug trials do, but he’s suggesting it is worth the time and effort.

Even knowing all these benefits, exercise still sucks and I don’t want to do it. I never have. My bipolar depression is a vortex and it sucks me, well, to my much couch. And this is not uncommon for people with bipolar depression (or major depression, for that matter).

That said, after some unfavorable bloodwork, my doctor has talked me into a basic exercise program. It’s an aqua fit program along with walking. Aqua fit, admittedly, I’ve never tried, so maybe I’ll hate it less than other types of exercise, but don’t hold your breath.

In addition, I’ve purchased a Fitbit which, so far, I have found motivational in terms of getting me to walk more.

I can’t start my aqua fit routine just yet as I just got a tattoo and I have to wait for it to heal. But I am gearing up to start it soon. (I bought a swim cap because, trust me, you don’t put hair like mine in a pool.)

In my opinion, nothing good will result from this. The only thing I’ve ever felt exercise do is make me feel exhausted.

That bias stated, I’m still willing to try. The lack of hope I have is typical of any treatment I try so I’m not all that put off by it. And I admit that Dr. Phelps is right, exercise deserves the same kind of trial as any treatment and when I’ve done it in the past, I may not have done it in a reasonable way.

So here I go. I’m going to try to beat bipolar depression (at least a little) with exercise. Wish me luck. I suspect I’ll need it.

Don’t Let Fear and Pain Make Your Decisions for You
Creating Things to Look Forward to with Bipolar Depression
Ron
November, 18 2017 at 6:49 am

I find that exercise has been a huge part of my treatment plan. Meds got me stabilized emotionally and mentally. I find that the huge shift for making exercise a regular habit and not some random "pick-me up" every now and then, was that I mad a commitment to myself that exercise is just a important as meds and I have to take that med to (exercise that is). I have a daily yoga/stretching routine that I do every morning at the very least. I make sure I go to the gym at least 3 days per week....even if it's just the treadmill for a half hour. Motivation may never come for me...but I make exercise a mandatory thing for me, just like meds. It's been a mind shift for me that has really enabled me to stick with it.

I bought an exercise bike from Aldi years ago but didn't use it until I had it moved to opposite the TV.

I had a really difficult time with this for a long time. I hated exercise and hated the gym and everything fizzled, which made me feel worse. Then I signed up for a Muay Thai class at my college. It was martial arts, boxing, and I LOVED it. Doing something incredibly intense that I was really bad at but made me feel bad ass was fun! I think for me it was finding that thing that I liked, but it was also finding a community of people that also enjoyed it and encouraged me to keep going even if I miss classes from time to time and even if I am not the best martial artist in the world. I'm still going after three and a half years, and it helps me balance my mood a lot. It fights fatigue more than most things do, and it helps my sleep schedule stay regular. I encourage you to keep looking until you find your thing.

There's some good evidence about the mental health benefits of spending time in nature. A while back we lived just off the Bruce Trail and most non-winter days I'd go on a vigorous hour or two hike mid-day. Best mood, energy and concentration I ever had. On the flip side, nature has the ability to be cold, rainy, and provide all kinds of other equally awesome excuse generators...

I got a fitbit as a gift in Aug 2017. It has helped me move more. I set a low bar 2000 steps per day. I also have fibro and chronic fatigue. I make that most days now using the 250 steps per hour part of the program. It hasn't budged my depression but I keep trying for other health reasons. That I've stuck with it must mean something.

Hi Catherine,
It's so funny because I just got one, too. I've only had mine for about a month but so far, like you, I'm finding it's making me move more, if, for no other reason, as you said, the 250 steps per hour.
I never thought a piece of technology would motivate me to do anything, but I might have been wrong about that.
- Natasha Tracy

I just bought a second hand treadmill for mostly the same reasons. I, theoretically, know that the exercise will benefit me and living with the bi-polar symptoms, but the actuality still eludes me. I love to just walk, mostly outdoors...unless other people are around. This means I don't do much walking outdoors, as I live in town, and I just don't want to even think about walking, and the possibility of having people even see me after a work day shuts me down that much more. My body hurts all of the time, but I feel I have a decent chance at give this walking a try, with a scheduled calendar set up to make sure I am accountable, and I don't have to deal with people while I walk. I can just read my book and let my feet just move me until my preset time (I'll start at 15 minutes) are done. Who knows? Maybe this WILL actually help.