Yesterday I talked about how to predict who is at risk for a suicide/suicide attempt. Today I want to talk about how to use that information to prevent suicide and what to do if you see the signs of someone experiencing suicidal thoughts.

It’s worth nothing that just because you have been diagnosed with depression and experience panic attacks and insomnia doesn’t necessarily mean you’re going to attempt suicide. However, if you were in that situation and also felt some of the above feelings like worthlessness, helplessness or rage and withdrew from life, I would start to worry about you.

And that really is the message. The message is we are all our brother’s keeper and not to paraphrase the United States government but – if you see something, say something.

In other words, if you see that someone is struggling in the above ways, don’t pussyfoot around the topic or ignore it – face it head on and get help. 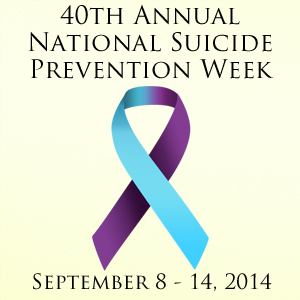 According to the American Association of Suicidology, once you learn the signs, here’s how you can be helpful to someone who is threatening suicide (or even who you suspect may be having suicidal feelings):

And most importantly, if someone is threatening suicide:

This could mean calling a psychiatric crisis team, taking the person to an emergency room or even calling 9-1-1 if the person is acutely suicidal. Do not ignore the problem. And remember, they may hate you for a time for forcing help on them but at least the person is alive to hate at all. (And most people do get over this eventually and appreciate that his or her life was saved.)

How to Spread Suicide Awareness on Word Suicide Prevention Day

Please share this article and others like it to spread quality awareness about suicide. Help me dispel the myth that the only people you have to worry about are those that write suicide notes (most people don’t write them). Help me get the real facts about who commits/attempts suicide out there so that not one more life is meaninglessly wasted.

Here are some additional things you can do to support suicide prevention.

Because yes, realistically, we will never see a year where no one dies of suicide; I know that. But that does mean it isn’t a worthy goal. Every life matters and if this information saves one, then that’s enough for now.

World Suicide Prevention Day – Predicting Who is at Risk of Suicide
Making the Big Decisions When You Have Bipolar
Renita
March, 14 2015 at 11:36 am

Your life matters even if you don't think so...

Choosing to drink, do illicit drugs or act violently is just that, a choice. But having a mental illness is not a choice. Therein lies the difference, although I do agree there is much overlap. I am not violent person at heart, I don't drink or do drugs. I used to be uncomfortable around people with a mental illness before, but now I just feel empathy and compassion for them. Having a mental illness has helped me become a better person in some respects. I support suicide prevention and all that it entails... Generally I do not support a person with a mental illness having access to a gun, legally or otherwise. I do not own a gun, they scare me. And I'm not a right to die advocate either because of my own spiritual beliefs.
To everyone though who chooses to pick up a gun to kill themselves, I'd like to say, I understand that the pain you feel must be intense but please remember a little part of those around you will die also if you make that fatal mistake. Whether or not I actually know you I can still be negatively impacted by you giving up on your life because I know life can be quite a struggle for me too. If you lose hope it makes me lose hope too that's why I like to read autobiographies/testimonies of people who have overcome great difficulties in their life. Sometimes it can make a difference between choosing life or death to know you are not alone in your struggles and that there is still a thread of hope to hang on to for just one more day and then another and another. When your at the end of your metaphorical rope, PLEASE tie a knot and hang on for just one more day...

Unfortunately, telling someone to get help from a hospital, calling 911 etc. can be a glib reassurance in itself nowadays.
There often is no room to stay in a hospital anymore (suicidal people are sent home) and much of the time, if there is a bed available, the care is actually abusive. There is zero care provided beyond drugging people on a modern inpatient unit in the US, at least in my experience and what others are writing on support websites. The groups are gone. No patient education at all. People leave the hospital as bad or worse off than when they went in.
It's so bad now, I hesitate to suggest someone call 911 unless they have already made an attempt and need immediate medical assistance. The cops certainly can take a bad situation and make it a lot worse.
The suicide hotline people vary considerably in their effectiveness (hmmm, I've called 3 times in my life, once was helpful, another time, the person pushed religion, and the last time, the person said all they do is give referrals so otherwise, goodbye).
It's good to write about preventing suicide (I'm glad that people, including Natasha, discuss this issue!) but there isn't much help for suicidal people unless family and/or friends provide it. I'm in a state with a reputation for good services, so I suspect the problems are much worse in many areas of the US than what I experienced. People with serious mental troubles or in crisis are a low priority in our society.
I don't know what to tell people anymore, because "getting help" is nowadays a glib reassurance to a person in a crisis who needs a LOT of help RIGHT NOW. That help is no longer available.