World Suicide Prevention Day – Predicting Who is at Risk of Suicide

In the United States, one person every 13.3 minutes dies of suicide. Suicide is the 2nd leading cause of death among young people (15-24). More people are killed by suicide than by homicide and yet it’s never suicide that people fear.

Some people say that no matter what we do, there will always be suicide so efforts to stem the tide of deaths are pretty much useless.

I say we should aim for zero suicides. I believe that not one more life should be lost.

And suicidologists (yes, that’s a thing) would agree with me. September 10th is International World Suicide Prevention Day. Here’s what you need to know about predicting and preventing suicides.

Can Suicides Be Predicted?

I can’t predict exactly who will commit/attempt suicide. What I can tell you, though, is who is at a higher risk. I can also tell you that most people will send out signals that they are suicidal before they attempt suicide but most people don’t see or act on them.

[This doesn’t mean it’s your fault if a loved one attempts or dies of suicide. You may have seen the signs, you may not, but it’s never your fault.] 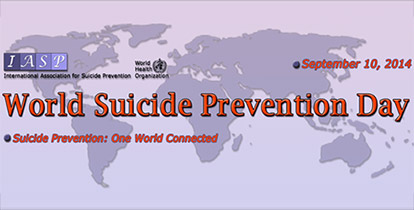 Who is at High Risk of Suicide/Suicide Attempt?

The vast majority of people who commit/attempt suicide have a serious mental illness. That is a given. Bipolar, depression and borderline personality disorder all carry heavy risk of suicidal activity.

But beyond that, there are other things that put a person at greater risk of suicide such as:

And please hear this:

Additionally, keep in mind that, by far, the most common means of suicide is by firearm. Those who show the above warning signs should not have easy access to firearms.

But how do you use this knowledge to prevent suicide? What do you do when you see the suicide warning signs? That is the topic of tomorrow’s blog post: World Suicide Prevention Day – Preventing Suicide.

Note: Some of the facts and figures in this article come from the American Association of Suicidology's Infosheet.

Paula
I happened to biased because because my mother shot herself. But I get your point, where do you draw the line. I realize it's not all black or white. There's alot of grey areas too. Other things should be taken into consideration as well. Believe me I get that. But that being said there are certain legal ramifications involved as in when a person becomes psychotic. The law looks at things differently. Were they of sound mind etc. when they... Granted there are a relatively small numbers of people with a mental illness who commit crimes. But add to that the number of people who are involuntarily commited to hospital because they are a danger to themselves. Assisted suicide is illegal. Giving them a lethal means to kill themselves is in my opinion, assisting. Now I also realize it's not fair to paint all people with a mental illness with the same brush but unfortunately that's the way the law currently views things in Canada
My stepfather (who has passed away now) was a hunter. He was also a pedophile. I was his victim and I was scared shitless of him. He had a grade 5 education and I doubt he ever had a permit or even registered his numerous rifles or shotguns.
I also happen to work for an enforcement agency so I'm around officers all the time who carry weapons because they need to

Hi Renita,
It's not that cut and dry. Just because a person has a mental illness, that is not an absolute indication that given access to a firearm, they would use it on themselves or others. I grew up an Army brat, with access to firearms; sometimes supervised events, sometimes not. I was taught at an appropriate age to respect all firearms, never point it at anyone else and know your target, in my case, paper bullseyes or tin cans. I also taught firearm safety classes after completing the course myself in addition to my father's instruction in the proper handling of any firearm.
I also have a diagnosed mental illness, and additionally, I was horrifically bullied as an adolescent and am a survivor of sexual assault. Let me assure you in no uncertain terms that AT NO POINT IN MY LIFE has it EVER OCCURED to me to use a firearm to harm myself or ANYONE ELSE; or ANY weapon of ANY kind for that matter! I should point out that I do not own any firearms because I have no need for any, as I do not hunt, nor do I have the time to go to a shooting range and frankly, I just don't have the interest in shooting sports at this time. I am not anti gun and I do feel that it shouldn't be easy for anyone to obtain a firearm without the proper training, or without the appropriate background check, but I do not believe that a mental illness diagnosis should automatically exclude an individual from obtaining a firearm, while ignoring the rest of an individual's history. Thank you, Paula

Guns always have been and always will be instruments of violence. Personally I don't think we need more guns in this world. I say leave that to the professionals whose job it is to protect the country and it's citizens (Armed Forces and Police). And if preventing a mental ill person from having a gun means protecting them from themselves, then so be it.

I'm confused, do you support gun control or don't you especially for those who have or have had a known mental illness?
I recently read one of the blogs on your Bipolar Burble page titled
"Why People with a Mental Illness Shouldn’t Be Denied Guns". Granted this is your own personal blog (not related to Healthy Place) but as a 'mental health advocate' who also writes blogs for 'Healthy Place' I was horrified that you believed those with a known mental illness should be afforded the right to own one...

Hi Renita,
I think the issue of gun control is very tricky. I think that when a person has a history of violence, then it's an issue of protecting others and those people should be denied access to firearms. That being said, anyone can have a history of violence regardless of mental illness. I do not believe that someone should be denied a gun based on mental illness diagnosis alone. That is discriminatory. (That said, I hate guns and would never own one.)
You can be a mental illness advocate and still respect people's rights to do something you, yourself, would never do.
- Natasha Tracy

Also it it finally accepted that eating disorders affect bor genders.It took a while,granted,but we are there.

There is lots of info on this subject.Men tend to 'use more legal methods' and are older.At 16 I was a stupid kid who didn't really understand how to be successful.At 56 I do now.I think this is also a factor.Are you suggesting that only 'completed' suicides count?

Why will nobody acknowledge that being male is a risk factor or that suicide is mainly a male "health" issue? Why do we have no problem identifying eating disorders as a female health issue but balk at allowing the same acknowledgement of reality if the issue predominantly affects men and boys? Why do we now start lumping in "suicide attempt" with suicide, as if they are equal in effect or intensity? We all know girls and women attempt suicide more frequently than boys and men. Are we not interested in a subject anymore if it is largely a male subject?