As many of you have heard by now, the drug ketamine is being investigated as an antidepressant. Yes, the drug known on the street as “Special K” causing it’s users to fall into a “k-hole” is being researched for clinical, antidepressant use. Ketamine has shown promise both in unipolar and bipolar depression.

There are many problems with ketamine, though, not the least of which being that it’s a scheduled substance in the United States and thus very hard to get your hands on. It can be done but it’s awfully pricey. There are also substantial side effects like hallucinations to worry about. (Ketamine is typically used as an anaesthetic in medicine.)

Luckily, there is a chemical cousin of ketamine on the horizon that appears to work in a similar way to ketamine but without all the unfortunate side effects.

Ketamine for Unipolar and Bipolar Depression

The initial clinical data on ketamine is very promising. It’s so promising, in fact, that I would take some right now, if I could get my hands on it. It’s an antidepressant that works often within two hours of administration instead of two weeks. This is because it works in a completely different way than standard antidepressants and is pharmacologically classified as an NMDA (N-methyl d-aspartate) receptor antagonist. In other words, it blocks NMDA receptors. The way NMDA affects glutamate may be one of the reasons why ketamine is so effective, but right now, we don’t know for sure. 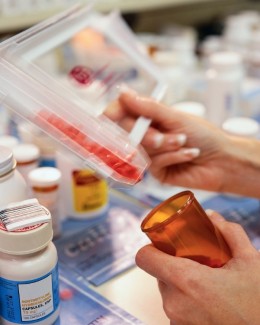 Ketamine has primarily been studied as an infusion (given intravenously). This is another downside to ketamine as people have to show up in actual clinics to have it administered. There are intranasular and sublingual forms of ketamine available too, though they haven’t really been studied in terms of antidepressant effect.

Warning: The doses being used in study are very different from what you find on the street so do not go and buy some from the guy on the corner. It’s not going to have the same effect.

So very smart people have come up with the drug GLYX-13 which acts somewhat like ketamine in that it produces an antidepressant effect rapidly (one hour) but it doesn’t have the same side effect profile of, among other things, hallucinations, substance abuse behaviors and excessive sleepiness. The antidepressant effects last for around seven days. This drug also has positive effects on memory and learning (both of which are impaired in depression).

This drug is in preclinical and clinical trials, at the moment. Right now they’re not sure how the drug works or the optimum dosing in humans.

What GLYX-13 Means for People with Bipolar Depression

So this drug is important because it may be able to step in where people have only previously experienced pharmacological failure. This is a huge thing. And a drug with a truly novel method of action hasn’t happened in years (with companies only putting out what some call “me too” drugs).

Now, GLYX-13 is years from approval – I know that. But I have lived with bipolar for 16 years and I can wait another five (or even 10) if it means getting an antidepressant that is that effective. It’s the long game, for sure, and it might not work out, but right now, I think the future for these types of drugs looks bright.

More information on GLYX-13 can be found here.

Bipolar Vacation Recuperation
Can You Outgrow Therapy for Bipolar Disorder?
Renita
November, 23 2014 at 7:01 am

From what I read ketamine is a dangerous drug and it goes to reason that anything else like it would be as well. Almost every drug has side effects and long term use of this drug and it's proposed purpose to treat treatment resistant depression are yet unknown. If it were me I'd shy away from it. Depending on how agressively it's marketted what if a patient heard that it worked for others but a pdoc was unwilling to prescribe it for them, my concern would be that a desperate person might try to get it illegally and that would NOT be good!

Newfie,
How bad would you say your anxiety is? How did Ketamine help with that? Would you say the anxiety was the prominent feature of your depression? I'm interested in getting infusions myself. Any info you can provide would be great. Thank you!

Hello,
I currently take ketamine infusion treatments. I have one every three weeks. The effects of the infusion only lasts about 10 to 14 days so it leaves me with a week without coverage. That 3rd week before having a new treatment can be very challenging. My depressive and anxiety symptoms start coming back. Although, no perfect, the ketamine treatment has been life changing for me. I would take the treatment if it only lasted a couple of days.

And, for something completely different, a drug used for bipolar disorder and seizures may change the plasticity of the brain, allowing people to learn new things as if they were children ... specifically new languages. Valproate, in low doses, can help an adult learn more easily ... .
Of course, my own experience with valproate were of the hugging-of-the-toilet variety, and I lost 15 pounds in 2 days. I've heard from other people as well that valproate is *challenging* to take, along with other euphemisms ... . But apparently, the people in this study had no such reactions, and truly, benefited from the drug.
Here is the link anyway:
http://www.psmag.com/navigation/health-and-behavior/limitless-drug-possible-learn-new-ski…
So, I wonder if people with bipolar disorder who take valproate as a mood stabilizer, had the benefit of learning things more easily. It would be remarkable if a psych drug had a really positive side effect, one unexpected and beneficial. (Like gabapentin and its pain relief side effect).
Sorry if this is off-topic, but I suck at internet research & research in general ... and Ms. Tracy does not. Someday maybe she'll look into this as she did with Ketamine.

I keep my ears open and read about new developments, but I've been getting treatment for bipolar for 30 years, and believe me, the "promising" treatments don't pan out in the end. Most people are not doing better with bipolar than they were 30 years ago. Probably worse. So I'm not holding my breath. A lot of stuff is hype for the investors I think, and marketing and some have been outright lies. I think most of the doctors on the front lines are trying to help us, but unscrupulous manufacturers exploit our desperation.
I'm actually an optimist by nature, but in the field of mental health, I've become very cynical and very sorry I ever got "help" for my serious mental problems.

I first heard about ketamine in the early 90s. I have been desperate to get my hands on it ever since. Thank you Ibim Sarkozi, for that excellent information on existing treatment providers. Perhaps if ketamine had been available, I would not have had upwards of 25 ECT treatments and lost precious long-term memories.

Ketamine research is now far beyond the initial stage. The first major study was published 15 years ago by Yale, and dozens more studies have been completed since by the National Institutes of Health, Mt. Sinai, Mayo, Baylor, Oxford, and other leading institutions. It is being used in clinical practice to treat major depression and bipolar by many doctors across the country. See the Ketamine Advocacy Network website, www.ketaminenetwork.org, for information on the treatment, and a directory of doctors who offer it.
Unlike you, many of your fellow suffers cannot afford to wait another few years for ketamine alternatives to arrive, because they are acutely suicidal this very minute. 38,000 sufferers end their own lives each year in this country alone. They deserve a last-ditch lifeline right now, and the ketamine research shows conclusively that it does help in about 70% of treatment-resistant cases. When something better comes along with fewer side-effects, great. Maybe it will be GLYX-13. But people suffering in acute agony need help immediately.
I have personally benefited from ketamine, having suffered more than 30 years with debilitating depression that kept me from achieving the normal milestones in life (relationships, marriage, friends, hobbies, joy) and caused me to lose nearly everyone and everything I cared about. I volunteered for a ketamine clinical trial at NIH a few years ago and experienced 100% relief of all symptoms within a couple hours. I now get regular treatment from one of the doctors listed on the directory, and at age 50 finally feel like I am actually alive.
Incidentally, the developer of GLYX-13, Naurex, is shifting investment from GLYX-13 to their more recent compound called NRX-1074. They have found NRX-1074 to have superior efficacy and side-effect profiles to GLYX-13. The company has indicated NRX-1074 is more likely to come to market first, and further development on GLYX-13 may be discontinued in favor of this superior option.

I know of a few chaps that cant feel good unless they're taking ket.one will costantly feel suicidal.i think it's definitely something to hear more about in hopefully a big advance against bipolar/depression.