I hate waiting rooms. I know this hardly makes me unique, but I suspect my hatred is more pronounced due to the amount of time I spend in them. Stale magazines. Old furniture. “Art.” Institutional beige walls.

I have had chronically on-time doctors and chronically late doctors but no matter what, somehow, in a waiting room, it feels like your life is wasting away.

Now my psychiatrist's waiting room happens to be in a hospital’s Mood Disorder Clinic, although I think people of any disorder wait in the same place for their doctors as well. We are the people who have stepped past the average doctor and the average psychiatrist up to the specialists. So basically, we are the craziest of the crazy, all trapped in a room together.

And if there were any doubt that we are scary, it is confirmed by the fact that the receptionist sits behind glass. Really, it’s rather creepy.

So all of us stare at our shoes and shuffle our feet, waiting for the next guy in a button-down shirt to call our name.

Perhaps it’s just because we’re waiting, which no one wants to do, for an appointment, that no one really wants to have. It’s ironic. And apparently irony is uncomfortable.

So the obvious answer is to plan ahead. When heading to a psychiatrist appointment bring a book, magazine, newspaper or one of those new-fangled tablets with you. Hopefully this will distract you from all of the unwanted waiting. 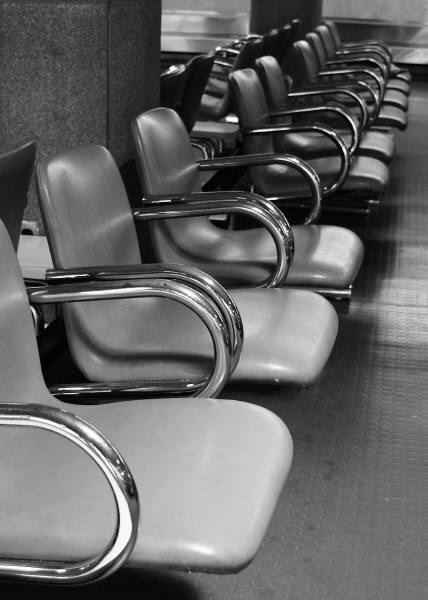 But oddly, I don’t find that suggestion very helpful. Maybe it’s because my discomfort with the situation doesn’t allow me to engross myself in another media. Maybe I just feel like I’m on heightened alert sitting in a fishbowl of crazies. I’m not sure.

What I do like though is coffee (or the beverage of your choice). Somehow, when I’m drinking coffee I can distract myself just enough to feel OK. It’s like there’s a wall of recycled cardboard and caffeine between me and the rest of the world and that’s enough to keep me safe. I can delude myself into thinking I’m in a Starbucks rather than waiting for yet another appointment where medications I hate will be adjusted.

Plus, the coffee acts as a reward. Yes, good little crazy girl. You made it to the doctor, once again Have a cookie.

Because, in the end, I have to go to psych appointments and anything that makes the whole thing more survivable is OK with me.

PS: Yes, I realize this piece uses the term “crazy” rather liberally. This isn’t to offend, it’s a stylistic choice and not one I find offensive. Read this.

Parents Don’t Have to Justify a Child’s Mental Health Treatment
Is Addiction Like Any Other Mental Illness?
Dr Musli Ferati
September, 9 2012 at 10:41 pm

To manage the bad experience of Psychiatrist Waiting Room is another psycho-social skill that help in the succeful treatment of any mental disorder. Undoubtfully, it is hard emotional burden to survive whole that labyrint of appointments and formal medical and paramedical procedures the accomplish a concrete psychiatric examination. However, there are many arrangements that somewhat exhibits an upset and antihumane approaching toward sensible emotional state to psychiatric patient.

True. Normal (haha) psychiatrist's waiting rooms are usually okay. Emergency Room psych holding rooms are much more different.
The first few times I was held in a room with a plastic bench. Nothing on the walls, a locked door, and floors the colour of vomit (I KID YOU NOT). I started to panic in that room so easily.
However, when I was admitted in the company of a friend, I was sent into the family room. It was very homey, with a couple ugly floral couches and a leather recliner. No vomit coloured floor, and semi-decent artwork on the walls. Plus this time, he was allowed to come in with me, instead of me going in alone, which really eased my anxiety.

All the psychologists and psychiatrists I've had in the past have been on or close to time. My current one usually runs 10 mins late but the one I see when he's away is always 40 mins late ... but he apologises which is quite unusual :) and he's funny so he makes me smile ("I'm so sorry I'm late again, what a surprise, I'm so bad, slap my hands then we'll have a cup of tea")
I don't have a problem with waiting rooms. The one where I go has comfortable seating, it's never full, the other patients are quiet and even the decor is ok ... avocado green walls with accent walls of rusty red giving way to aubergine in the consulting rooms. The secretaries are friendly and sit behind a normal counter.
When I'm feeling OK I either read (book, e-book, tablet), play on my phone or listen to an iPod. When I'm not feeling good I just sit and try to get my thoughts in order.
Being at the A & E for emergency psych admission was a whole different story!!

I don't do waiting well,this was not a problem for me until I became mentally ill, and I have discussed this with many other people who have different types of mental illness, and with one exception all say they too, developed anxiousness when waiting to go in for their appointment.
It's been my experience that the different psych doctors I have seen all try to keep the appointment times and I have discussed this subject with them, I was told that it was not uncommon for mentally ill people to experience this.
Just another little thing we have to adjust to in our lives I guess.

I hate waiting rooms. I've had full blown panic attacks in the middle of them.
My old psychiatrist was chronically late, so I'd bring a music player and my phone, just to try to distract myself from where I was. I have done the coffee thing as well.
Since I've moved, I got a new psychiatrist whose office is in the hospital. The receptionists aren't behind glass, and it's just steps away from the inpatient ward. I find it much more comfortable, for some reason.

I think since hospitals and waiting rooms in nature are horrible places they should be painted as if for a child's room with bright colours and happy shapes on the wall to make things a little less dull and stressful...I once had to wait for my blood to be taken for over an hour causing myself massive anxiety to the point of near panic. I have a mild fear of needles so the longer I sit and wait knowing it's coming the worse I get. Other than that I go to clinics that are never very busy so my wait time tends to be short....We'll see what happens when I finally get into therapy though.

I play solitaire on my iphone. That helps me get through the waiting...

The worst thing, I find, is being judged other patients and their carers, when I'd expect it to be the last place where one would encounter this. I am certain I'm not being overly sensitive.
One time, an (obviously unwell) elderly man sitting across from me glared at me in disgust and said loudly to his carer, "What's she doing here? She's too young to be depressed". I loved his carer's simple response: "Depression doesn't discriminate, you know". Everyone else in the room looked decidedly uncomfortable!
The best part is catching up with friends from hospital. (Like you, the outpatient clinic I go to is attached to a hospital).

My waiting room experience is different everytime, depends whether it's outpatients or inpatients, and which doctor I have. In one inpatient experience, there was me, a passed out girl, a lesbian couple, and one angry man. The passed out girl saw my lap as a comfortable place to lay her head. The carer of the couple was highly diverting as she relayed experiences of their life in hospital waiting rooms. She seemed just as manic as her lover. The angry man got angrier and angrier, but fortunately for us his anger was directed at the staff and the system and not at us girls. Eventually they had to sedate him and take him away. I talked for about half and hour with the nurse, and with the registrar, who came up with a plan we were both happy with and sent me on my way with instructions to come back if necessary. The manic girl said - "oh, how come you get to go home? Not fair."
In the outpatient waiting room, several things are predictable. The wonderful ladies behind the glass, who call you by your name. The smell of urine from the inevitable incontinent patient. The loud voice of the social worker discussing concerns with her patient in the public area. And the very, very, long wait. At least there is a drink machine. And if you walk further, a chocolate machine.
The worst inpatient experience I had was when I was really unwell and needed to be admitted. The emergency centre was overcrowded, with people sleeping on the chairs. My mum brought up some bags of clothes and snacks and toiletries for me. They kept them behind the glass, until they had got a chance to look through them for potential dangerous items like razors and plastic bags. Fair enough. I wasn't a danger, but perhaps other patients were. About an hour later, I tried to get my bags and did my best to behave like a sane human being with my insane mind in this insane place where people didn't answer when you spoke to them. I finally got the attention of one nurse. He gave me my bags. I asked him if he had looked through them. He replied "I don't care if you cut yourself". This is offensive on several levels, and shows a distinct lack of knowledge and ability on his part. At least I knew that there was nothing dangerous in there.
Yes, waiting rooms have always been interesting.

I've been pretty fortunate to have doctors that are on time for the most part. There are occasional days when it's a hurry up and wait game, and I find that listening to my MP3 player passes the time and is relaxing as well.
As for coffee, one of my docs has a single serve coffee maker, it's a great and I avail myself of it.
Goes great with the music player.
One more thing, is it just me or do all waiting rooms seem to have neutral beige on the walls ?