I have said it again and again, what goes up, must come down and it usually does so with a resounding thud. A crater. An impact that puts you lower in the ground than before you started. In other words, a depression.

And that’s the problem with hypomania. For many people the hypomania itself really isn’t a huge deal (although for some hypomania in and of itself is damaging) but the period afterwards is devastating. It’s the hypomania hangover.

On Wednesday I was filmed for a documentary on bipolar disorder by Fiore Films. This was altogether a pleasant and fun experience if harried and stressful. Against my better logic I stressed out before filming and held my brain together by narrow margins during the filming itself. Quite frankly it’s daunting to be interviewed for two hours at a time.

And so I was hypomanic. The stress ate away at my stability and caused a few days of crazy. It wasn’t the biggest deal for me because hypomania I can handle and channel, but there it was nonetheless.

And now I’m sitting in the black hole of the hypomania hangover and I feel like I’ve been hit by a truck. Or maybe a car. I mean, I suppose it could be worse. 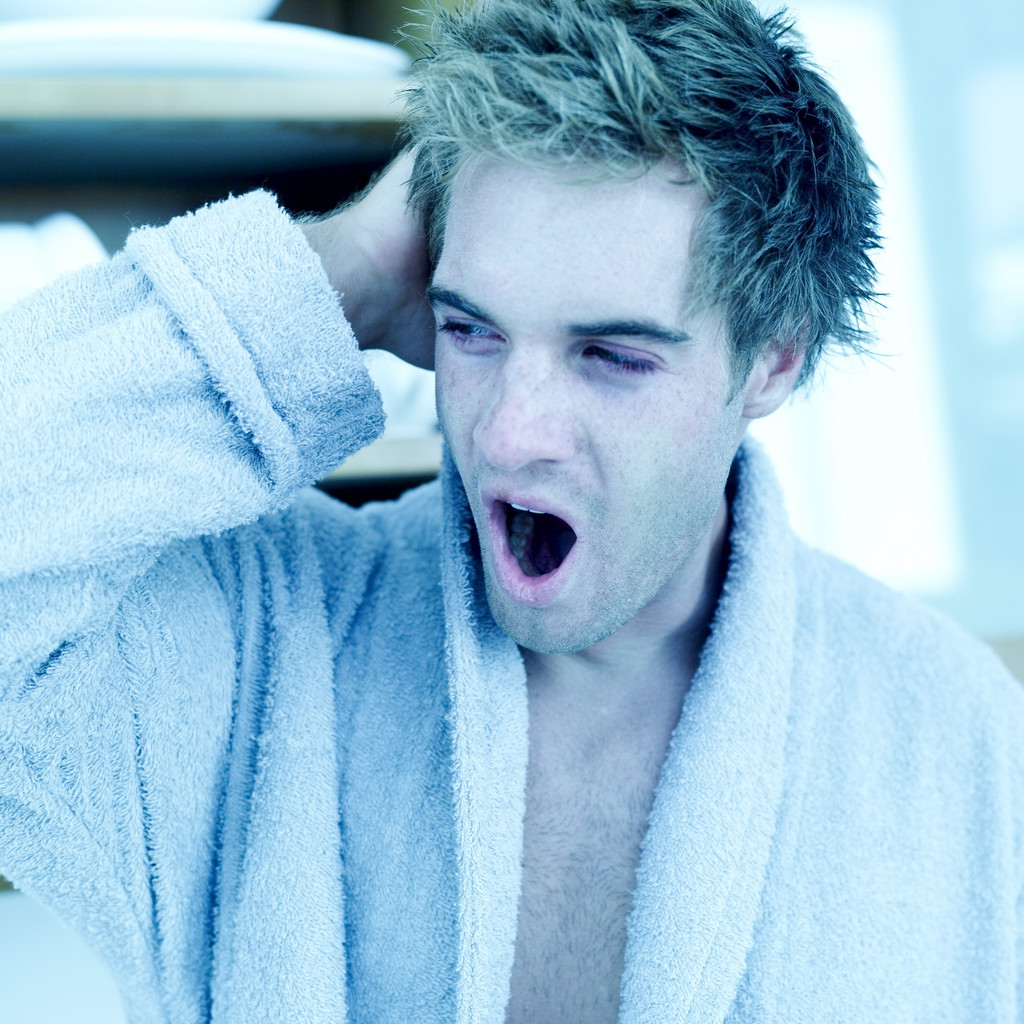 When I say I feel like I was hit by a car a really mean it. My whole body is weeping with fatigue and stress and yes, pain. I’m beyond exhausted. Yes, I’ve slept, like usual, but it seems to have done nothing for me. I spent all day yesterday resting and today is only a slight uptick in energy levels. And yes, depression is clawing at the back of my brain with angry, bloody claws just begging for me to let my guard down for a second so it can move in and take root.

Take Care and a Hangover Passes

But like all hangovers, this one, too, shall pass but it does require excessive care to do so. Resting is the primary need combined with permission to do nothing for a while. I’m not sure how long, but another day with a serious me-imprint on the couch is probably required. The important thing to remember is that a hangover is not the end of the world – just a natural part of a bipolar cycle that can be lived through and passed like anything else. Don’t make it worse by worrying about how much worse it could get. Just try to accept it, breathe, rest and go on. Because you weren’t up forever and the resulting hangover won’t last forever either.

Limitations and Rules that Keep Us Safe
Making Plans with Bipolar Disorder
KAK
March, 16 2016 at 1:21 pm

OMG I just got diagnosed with hypomania and am in my late 40s. I'm exhausted! All this time I thought I was lazy I was selfmedicating, but with guilt. Well forget it, I'm going to watch some crap TV, shut off the email, forget about productivity, and enjoy the hangover!

Is it even possible to have depression daily and never see a break from it??
Their is no hangover for me, I'm depressed daily, everything gets on my nerves, specially loud sounds, I'm only 32 and feel well over 40, I self harm when I have sharp objects nearby, my chest feels heavy all the time,

I have and deal with major depression and honestly have no idea what hypomania is.

I 'enjoy' periods of hypomania that last for up to three months. My most recent came to an end around three weeks ago. However, for the first time, I am experiencing a prolonged hypomania hangover, which was confirmed, and explained, by my doctor. I am surprised by the physical nature of this hangover: my face is covered in spots and blotches; I am paler; I am sleepy and have been for weeks and, in general, I am 'run down'. The doctor explained that prolonged hypomania can leave one in this state. Makes you think, doesn't it? I had no idea that while hypomanic, that my body would suffer for it for weeks!

I've just come out of hypomania and hit my brick wall today. Feel utterly exhausted. I know what you mean about not knowing whether this is the normal you when your hypomania or not. I love my highs but I don't know how long I'm going to suffer for it now.

Hi Beth,
I actually have articles on both of those things. However, these articles exist on my personal site and in no way is this site affiliated with HealthyPlace:
Self-Diagnosing Hypomania: http://natashatracy.com/bipolar-disorder/self-diagnosing-hypomania/
and
How to Handle Bipolar Hypomania: http://natashatracy.com/bipolar-disorder/handle-bipolar-hypomania/
I hope that helps.
- Natasha

Hi there Amy,
I was struggling with the same thing myself. It's like you can't enjoy feeling good because you're constantly worried that you are going to be hypomanic. Is it me or is it the disease?
I keep an updated list of warning signs and the people close to me know it as well. If I am concerned I usually ask for feedback from close family. If they are concerned also then I go to the doc.
The other thing I do when I suspect hypomania has started is to make sure I get a proper sleep routine and other strategies.

Can I ask what's probably quite a stupid question?
How do you know whether you're stable or hypomanic? I mean... as you come out of a depression, does that always mean you're going to go into hypomania?
I ask because I'm constantly worrying as I start to feel better whether I'm going to be stable or hypomanic.
I mean, last week I was feeling ok so when I went out to buy food for my pets I went into a clothes shop and purchased a new dress. Then I went into another clothes shop and treated myself to some leggings to wear with the dress. Then it was a shoe shop to get some shoes to go with it... which turned into two pairs of shoes.
Then I panicked that I was overspending and being reckless with money and that I was heading into a hypomanic episode. So then I was watching everything I did and thought and over analysed it and as a result I'm now back in a depressed state.
Is there any way of knowing for sure whether your behaviour is "normal" or if you're in an episode?
I'm sorry, I'm probably not making any sense. I'm struggling to even understand myself at the moment. My thoughts are just all really jumbled and disorganised so maybe I'm still slightly more on the manic side? Who knows. Not me. That's for sure.

Hi, thanks for the post. It reflects my own experiences. I need to be more accepting of this cycle as I 'cling' quite strongly to the idea that hypomanic is when I'm 'normal' and then crave that state more and more.
Of course this is a no win situation - it seems to increase my hypomania , because I'm doing everything at 100% to maintain that state, and then my crash is harder for it. I experience the 'hangover' all the worse for my disappointment etc etc and find it harder to recover from it. Then the cycle just keeps playing out.
When will I ever learn to 'just breathe' , be present and let go of the craving of experiences different from my own..

I'm really glad you wrote about this right now. I'm trying to keep the hypomania at bay but with little success because I keep going up and then crashing, up and down, and round again.
It's because of health problems. I couple of weeks ago I had what was determined to be either a heart spasm or an spasm of the esophagus, either way it came across as a flat out heart attack with pain so severe I could barely breathe or move and just barely managed to call 911. It was an excruciating and frightening event and I was in the hospital for days. Since my mother died young of heart disease it was doubly upsetting worrying about my fate. I was warned it could happen again. It did a week later. They're talking about invasive heart testing. Facing future attacks and scary tests is NOT something that is easy for a bipolar affected person to take calmly!
Besides all this I'm trying to ease flare-ups of arthritis and painful tendonitis in my shoulder while working on art for upcoming art exhibits..while of course trying to avoid hypomania (limited success) and the subsequent loss of all energy and focus (read: endless sleeping jags).
The most important thing I need to remember is not to get upset with myself personally, because it's not personal, it's not my personality, it's the bipolarism. Frustration is like poison. Getting angry at the physical pain I feel only makes things worse. Finding ways to ease myself in every little way I can is the ticket.
This afternoon I finally accepted that I needed a little help from my friends and went over to a friend who is a 'healer' from the Native Reserve. She held a very calm and centering healing ceremony with me. It was pleasant and calming. It was basically just going over the visual healing techniques I've learned in the past to deal with pain and stress. Then she gave me the most wonderful massage for my neck and shoulder. Ahhhh... I feel a lot better. Even other non-bipolars can help remind us to accept the way of nature.

Hi Graham,
You'll get no argument from me there. You're correct that the bad times (whatever they are for you) will come again. I just try to focus on the moment. I'll get out of _this_ pain. Sure, it might be replaced by other pain, but that's tomorrow's problem. Maybe it won't be. You never know.
And yes, it's exhausting no matter how I think of it.
- Natasha Tracy

I suppose what bugs me is the never ending cycle. Sure, you know the bad moment will pass because they always do; but the bastard always comes back again eventually and so the cycle plays out. I suppose it's a wee bit more than that because my BP overlays Dysthymic Disorder. DD, it is said, is a "mere" low level depression. Well, a drip of water is a low level of water, but place a drip on the head, continuously, for long enough and it's torture, the Chinese water torture. DD is like that. There is not break from it. So, when there is the inevitability of the Bipolar Depression coming back on top of the DD ... it can get kinda exhausting! (Understatement...)

breathing, eating properly, dog walking, watching rubbish TV and sleeping all work for me or if sleep does not happen more or less immediately, I clean something or install another OS