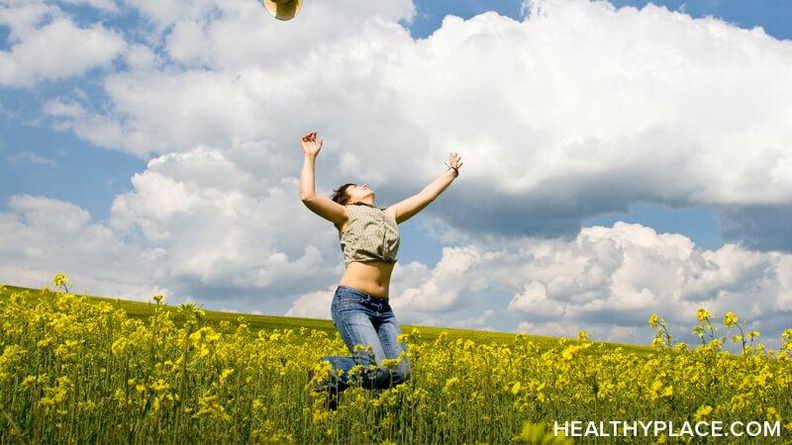 The journey of a thousand miles doesn't begin with a spin class, but everyone knows they should exercise. People should be doing it right now. Me too. We should slowly and calmly step away from the Internet. And most of us even know exercise acts as an antidepressant. Which means if we actually got up and walked around once in a while, we might feel better.

How does a person with a mental illness fight that?

Why Don't We Exercise for Mental Health (or Any Other Reason)?

There are lots of reasons why people don't exercise, but for someone with a mental illness, I think it's pretty, darn simple: we feel like crap. We barely have the energy to make it to the bathroom and back so "exercising" is a ridiculous notion. We're tired. We want to sleep. Stop bugging us.

But more than just feeling like something a cat spit up, many people with a mental illness are perfectionists. No, perfectionism isn't a mental illness, but what it can be is self-sabotaging. If-I-can't-be-the-very-best-athlete-in-the-world-then-I'll-be-no-athlete-at-all.

This is the black-and-white, all-or-nothing thinking seen frequently in depression. If you set unrealistic goals for yourself, then you will never reach them, and not reaching them will make you feel worse, thus making it even more difficult to achieve your goals. It's a vicious cycle.

Yes. It does. For mild-to-moderate depression it can work as well as an antidepressant medication, maybe even better in the long-term. Really. Exercise also appears to help stabilize mood and sleep (although it may stabilize the mood just from affecting sleep, it's hard to say).

But wait, the definition of exercise isn't "60 minutes of cardio." Exercise really just means to get your body and heart moving. It's so much simpler than your gym membership would have you think.

here's your exercise program: go to the door, look at your watch. Walk 7.5 minutes in any direction, then turn around and walk home. Do that 5 days a week at least.

That's it. 7.5 minutes of walking in any direction. You can do that. If you add up the commercial breaks in an hour-long TV show you get more than 7.5 minutes. Really. You could learn how to get less expensive auto insurance from a lizard or you could help you mood. Your choice.

It doesn't have to be big, long, fancy or hard. It just has to be done.

And I realize there are going to be days when you're too sick to do even that. That's OK. No one's perfect. Just try again tomorrow. The main point is that moving around, even just a little bit can help you. So stop beating yourself up for not being a marathon runner and just walk to the corner store for a quart of milk.

The ugly bit: sorry to say, according to research the amount of cardio really does matter. But I say if 15 minutes is good enough for the Harvard Bipolar Program leader then it's good enough for me.

Be a Good Mental Health (or Bipolar) Patient - Participate and Choose to Get Better
I Hate the Mentally Ill - My Ex was Bipolar and She was Evil
Basa
March, 31 2013 at 11:36 am

Do some of you work? I just am perplexed when I hear (all too familiar)what many are going through and can hold down a job. I can't even imagine being able to do that at this point.

Hi! I LOVE this-talking to people like me! I feel Better knowing that there is hope. I was on Lithium for 13 years, before last year in Jan-2010 I became Lithium toxic and almost died...Then I was put on Trazodone, Topomax, Gabapentin, Soma, Paxil and Zanax and Propanolol. I am off everything but the Paxil and Gabapentin because I could not go in and see her-$100.00 per half hour and she won't take insurance at all. The thing is I am really confused about what to do now. I feel like it doesn't matter what I take because if I almost die, or run short of money...Our car died for 3 weeks and we had our Gas shut off, late for our rent, she did not care....that it is just not important. I am "ok", but feel afraid. Of what I don't know. mrsgrytness@yahoo.com Thx!

I have had a much easier time sticking to my exercise goals now that I am on meds that are helping me feel better. I'm having an easier time with that all or nothing, black or white thinking I have gotten myself stuck on. I don't know if it is the meds that have helped calm me down or what but all I know is something is working.

Hi Ed,
Thanks.
"I call depression “human kryptonite”"
That's great and so true. It is like being zapped by a cartoon de-energy ray (if you will).
Training for a triathlon is a _huge_ goal. Any bit of motivation towards that goal would be pretty useful I think.
There are lots of baby steps between here and a triathlon. Give yourself plenty of time :) Good luck. I'm glad for any bit of help I can provide.
- Natasha

Wonderful article!!! It really hits the nail on the head for not only the importance of baby steps, but how depression makes it so hard to even be motivated to do so. I call depression "human kryptonite" because it takes away the very source of motivation that you need to fight it. A few months back, I took the ultimate step in trying to use exercise to fight my depression by entering and training for the 2011 New York City Triathlon. This article helps me keep perspective when I'm feeling really lousy and can't bring myself to train and to remember it's doing ANYTHING you can to get yourself moving. Great article. I've already told several people about it...

Marcela,
Sorry, I would have mentioned it if I could only keep up with what's going on in all my areas. :)
Hope your discussion went well. I'll be at one again soon.
- Natasha

Oh, too bad I didn't see this before. It would have been very relevant for the #s4pm discussion of health games yesterday.

Hi Kellie,
"You’re so right about the perfectionism and all-or-nothing thinking. Those mind traps ensnare our bodies into immobility."
Absolutely. Well said.
- Natasha

Hello Small Bites,
"My motivation has been deconstructed into MOVE MORE. "
Yup, I think that's great advice. And if it works for you, I say brava.
The only trouble is it's a bit vague. The beauty of walking for 7.5 minutes is it's very specific and very doable. "Move more" seems like something my psyche could wiggle out of if pressed.
- Natasha

Hi Kristen,
"Thank you for the reminder and encouragement."
You're welcome :) Glad to help. Good luck on your assignment.
- Natasha

You're so right about the perfectionism and all-or-nothing thinking. Those mind traps ensnare our bodies into immobility.
I've talked myself into believing I am completely different from all other humans and need no exercise to ensure a long, healthy life. (Really. I'm special, people! Don't you see it?) :)
Thank you for the gentle reminder that having two legs and a pumping heart is a blessing to care for.

My motivation has been deconstructed into MOVE MORE. I don't have even a time amount or an activity in and of itself. Rather, every day, I am moving more.
I'm having a good time. I'm finding that without creating rules or a program, sometimes I go play frisbee, sometimes I ride the bike, sometimes I go for a walk and sometimes, I don't do anything at all.
But I'm moving more. And it feels good.

Came just in time. I saw a therapist yesterday who told me to walk just for 10 minutes. This is my assignment for the next two weeks. I plan on walking around the apartment complexes - a fifteen minute walk. And no I don't feel like doing it, but I'm going to get some rest and make myself do it. Thank you for the reminder and encouragement.

Hi Angela,
Thanks so much for your excellent comment that details exactly what I was talking about.
Good luck on turning on the treadmill each day :) Sounds like a good goal to me.
- Natasha

this is so appropriately timed it's not even funny. okay, it IS funny. after bob was born, i got...porky. and i didn't get un-porky until the summer before i met my (current) husband. then bob deteriorated and there was the ugly nasty custody battle and the stalking and the job change and i got REALLY porky. then a couple of years ago i got serious and un-porkied myself again--only to fall into that depression black hole last summer and instead of running 4 miles a day, i watched tv and ate 4 hours a night and gained 10 of the 40 pounds i'd lost. it's been a constant nag session between me and me since then about getting back on the treadmill and, to quote nike, JUST DOing IT. part of the problem, like you said, aside from feeling like cat puke, is the perfectionism thing--if i'm busting a$$ on the treadmill, dammit, i want to drop 10 pounds the first week. logical me knows that's laughable, but perfectionist me says "if i can't do it, there's no use." last weekend, the victoria's secret catalogue came in the mail, and those models have been laughing at me, so i've committed to getting back on the treadmill--One. Day. At. A. Time. i will not weigh myself, i will not compare how my clothes fit. i will simply focus on getting on that treadmill every day and at least turning it on. so far, so good. :)