Never Tell a Person with Depression to Lighten Up 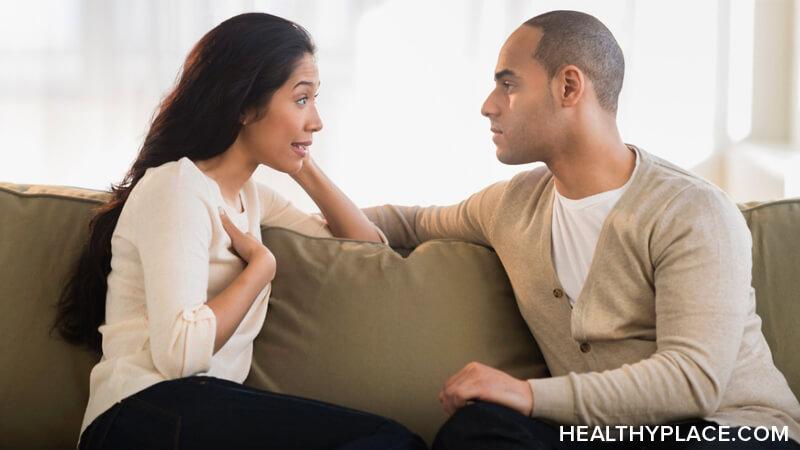 What Is 'Lightening Up?'

According to Dictionary.com, "lighten up" means:

Become or cause to become less serious or gloomy, and more cheerful. For example, Lighten up, Sam—it'll turn out all right. This slangy expression transfers reducing a physical weight to a change of mood or attitude.

So saying "lighten up" to someone is akin to saying "be more cheerful." Ordering people to be happier -- no wonder I hate it.

Don't Tell a Person with Depression to Lighten Up

When I was young I was told to "lighten up" a lot. It was how my father and my brother would silence me after they had been, well, rather mean, usually. I would be silenced, true, but I would also feel exasperated that no one was listening to me and this resulted in me feeling guilty for my own emotions. And, of course, after being told this over and over, I certainly didn't want to express my emotions anymore.

And this is exactly what happens when you tell someone with depression to "lighten up." What you're doing is saying that person's emotions don't matter and that he or she should just set them aside and act in a different way -- a way that you deem more acceptable. You're discounting that person's genuine feelings of depression. Because depression results in genuine feelings. Those feelings are powerful, real and need to be accepted, not minimized ("Stop Minimizing Mental Illness: Worst Things to Say").

It's well worth remembering that people with depression die by suicide every day -- every day. And I believe that none of us wants to push a person with depression in that direction ("Suicide Information and Resources"). But marginalizing depression and the feelings and expression of depression is not helping. It's very hard for many with depression to express what they're going through and if you're the person they've decided to tell and you discount what they're saying, you're basically telling them not to talk about it. And this message can make a person not seek help for depression. And let's be clear -- not getting help for a serious mental illness like depression can actually kill a person. This is serious.

No one reacts perfectly when someone expresses serious depression. I think that's pretty much a truism. But the goal is if not to help, at least not to hurt. So take that person's feelings seriously and treat those feelings with the respect they deserve -- just like you would want to be treated.

Of course, telling a person with depression to lighten up is only one thing to never say. When you're considering how to respond to a person with a serious mental illness, watch this.

APA Reference
Tracy, N. (2019, December 30). Never Tell a Person with Depression to Lighten Up, HealthyPlace. Retrieved on 2022, August 19 from https://www.healthyplace.com/blogs/breakingbipolar/2019/12/never-tell-a-person-with-depression-to-lighten-up

Rejection Because You Have Bipolar Hurts -- Getting Past It
What to Do When You Can't Feel Thankful Over the Holidays
no name
March, 21 2021 at 4:12 pm

That's pretty ironic of you to claim.