Changing the Neural Pathways that Cause Suicidal Ideation 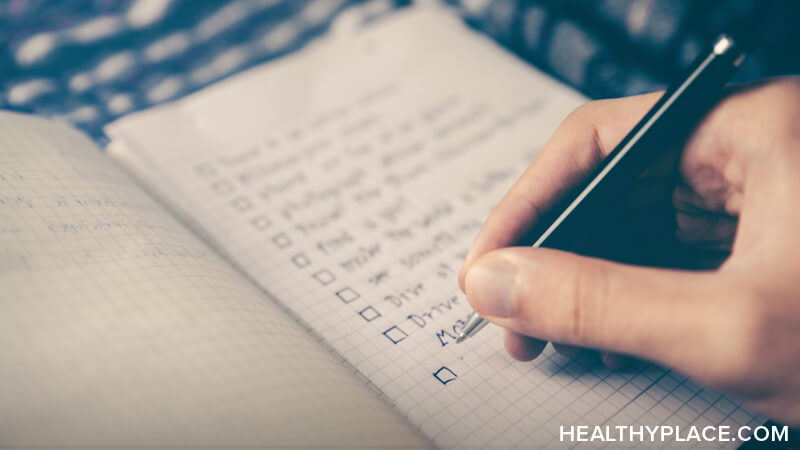 Content warning: This piece discusses suicidal ideation and could be triggering for some people. If you are having suicidal thoughts and do not feel safe, please call the National Suicide Prevention Lifeline at 1-800-273-8255 or go to the nearest emergency room. Also, see out resources and hotlines page here.

My husband and I are standing in the kitchen of our new house, picking out paint colors and deciding which projects to tackle first, when suddenly I think "It doesn't matter, I won't be there to enjoy it. I'm going to end up killing myself eventually." I don't mean to think this. I don't want to think this. Luckily, I've had experience with these intrusive suicidal thoughts before, and I'm able to stay calm. I know that I don't want to die, I'm just experiencing a lot of change and my brain is seeking out the comfort of its old neural pathways.

What Are Neural Pathways?

Neural pathways are like shortcuts for your thought processes.¹ The more we use them, the stronger and more natural they become. The synapses between the neurons in our brain get used to firing in response to certain stimuli, and may even learn to anticipate those stimuli so they go off before a trigger even happens.

This is a good thing sometimes, like when it comes to identifying hot objects without having to touch them. However, this is not such a good thing for suicidal ideation.

A Neural Pathway for Suicidal Ideation

If you have ever had thoughts of suicide that surprised you or seemed almost random, it may be because you have a neural pathway dedicated to suicidal thoughts. It's actually a very common occurrence in people who have considered suicide in the past.² Suicide is a very scary, intense concept, which means it can carve deep neural pathways in your brain.

This suicidal ideation neural pathway often pops up in times of change or trouble. Even though suicide is scary and obviously not something we want to consider, it has a neural pathway, meaning our brain is used to it. If you're facing something entirely new, even something good, like buying a house, your brain may retreat to old problems that it knows it can solve rather than facing the new ones.

How to Change Neural Pathways

Changing neural pathways is hard because they have become a natural part of our thought process, something we hardly even notice, really. So the first step in changing a neural pathway is to notice it. The other day, when I was in my new house thinking about dying, I recognized that those thoughts weren't connected to my mood or current situation, and I was able to stay calm.

Once you've identified a neural pathway, try to replace that thought with another one.³ For instance, whenever unwanted suicidal thoughts pop up, I don't let "I want to die" play on repeat in my head over and over. Instead, I change it to "I want to go to bed." A lot of the time, I don't really want to go to bed, but then again, I don't really want to die either, and thinking about going to bed is much safer.

Finally, the third step in changing a neural pathway is getting professional help. There may be some neural pathways you can change on your own, but when it comes to suicidal ideation, it is always best to include the help of a mental health professional. Thoughts of suicide can be intense and scary and it's best not to work through them alone.

APA Reference
Griffith, M. (2019, May 10). Changing the Neural Pathways that Cause Suicidal Ideation, HealthyPlace. Retrieved on 2023, January 27 from https://www.healthyplace.com/blogs/recoveringfrommentalillness/2019/5/changing-the-neural-pathways-that-cause-suicidal-ideation

Facing Stigma: Patients, Professionals, and the Public
5 Ways I Stay Motivated When I Feel Like Giving Up
Lisa
May, 10 2019 at 10:41 pm

Thank you so much for this story. It reinforces the MH needs and our needs to know more about the brain, it executive functions, and how we can outsmart our minds by using our minds.