Hospitalization Myth #1: It Is a Punishment for Being Suicidal

I grew up in a conservative Christian environment, and to say our beliefs about mental illness were antiquated is putting it mildly. In that time and setting, mental illness was something to be ashamed of, like sexual misconduct or pathological lying. And if your child had mental illness you sent them away to a behavior modification program. 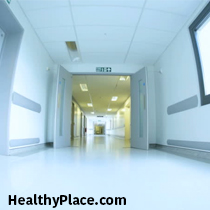 So I sought help from books, one of which said hearing voices was demonic oppression and recommended repentance.

This fear continued into college when I became suicidal. When the university found out about my mental health disorder, I was suspended from class and evicted from the dorms pending an assessment--in which the whole thing was made out to be my fault. I was told I'd "created a disruption" and that I should consider going home. When the university recommended hospitalization, I was vehemently against the idea until a psychologist told me it wasn't my fault and that hospitalization was not a punishment for being suicidal.

While my first hospitalization was a tough experience that probably could have been avoided had I sought help earlier, it did help. Once I had a diagnosis, I got an understanding of what was happening to me. Once I learned the situation was not my fault, I was able to ask for and receive help---real help, not more "just pray harder". The medications helped and I was able to return to class and still finish the semester with a B average. In an ideal world, hospitalization is designed to save lives, not penalize.

I've been hospitalized many times, and rarely have things become violent, even in the most intensive care settings. Most patients that do become violent become violent toward themselves because of their illness. Only once in nearly 20 years of treatment have I ever been injured by another person while in an inpatient psychiatric facility. It's a myth that people with mental illness are more violent than the general population.

It's also a myth that the staff are violent. Under the law, they are required to use the least restrictive means to keep the patients safe. Have I seen people restrained? Yes, but only when they're starting to become violent and there's absolutely no other way to protect either the individual or the other patients. Have I seen restraint abused? Yes, but I had plenty of recourse and the State of Indiana took it very seriously and acted quickly (When Convenience Trumps Treatment: The Abuse of Psychiatric Restraints).

The antipsychiatry movement loves to say this. There's a big difference between psychiatric hospitals and jails or prisons--most people in psychiatric hospitals have a choice as to whether or not to be there. What they do not have a choice in is their mental illness. People in jails or prisons have no choice but to be there, and most of them have chosen to commit a crime (obviously this may not be the case with a prisoner with mental illness). One place is for mental illness treatment, the other for rehabilitation.

Yes, both are designed with security in mind. Yes, there is such a thing as involuntary treatment, but that's the exception and not the rule. Ultimately, in a psychiatric hospital, you are the person in charge of your treatment. That's not the case in a correctional facility.

So those are three myths about hospitalization that keep people from seeking mental illness treatment. What myths have you heard?

We Need a Sensible Drug Policy in the U.S.
Stop Speculating on President Donald Trump's Mental Health
Prometheus
April, 20 2017 at 7:35 am

This is complete nonsense and they're are court cases, federal investigations and papers by the NCBI that prove these so called myths to be verified facts.

Hospitalization may not be an actual punishment, but there are those who use it as such. My family and friends hold it over me if I'm being too depressed, suicidal, or cutting myself. "Do you want to go back to the hospital?" I hate that sentence!

I agree with your three myths, but have to point out that involuntary hospitalization my be more common than you think. All four of my hospitalizations were involuntary, brought in by the police in handcuffs. At this point, it does feel like prison.