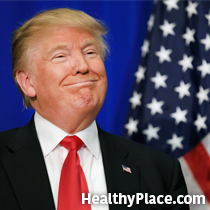 How do you feel when you hear someone say President Trump is mentally ill? Now imagine that you have a mental illness and you're watching someone get dragged across the coals of stigma (Stigma and Discrimination: The Effect of Stigma). Does it make you want to seek help? Does it make you afraid your doctor will talk about your mental health to others? This is why it needs to stop. Diagnosing President Trump just reinforces stigma by attaching a very real physical condition to a polarizing figure, and people will avoid seeking treatment out of fear their mental illness will become public knowledge.

Even personality disorders are treatable--I'm in recovery from borderline personality disorder. Mental illness is very treatable. Most mental health professionals do respect confidentiality. But when there are those that don't and they throw the label around casually, it does a disservice to us all.

Stigma and Diagnosing President Trump with a Mental Illness

Hospitalization Myths Preventing Mental Illness Treatment
For Mental Illness, Should I Check the Disability Box?
Nancy
February, 19 2017 at 11:07 am

Thinking about the President's possible mental health problems makes me feel fearful. I need to keep myself calm and hopeful in my life here in America. So let us respect one another in an energetic way. With awareness that we want that for ourselves.

The outburst of labeling on Donald Trump's mental statement confirms the sensuality of psychiatric diagnosis, respectively mental health etiquette. Furthermore, when it is in question public person, such is the president of USA, the issue takes over tremendous dimensions, with many dangerous repercussions for complex mental health care system. Your recommendation to stop speculating on president mental health may to decrease the aggressive tumult on legal elected president, but is insufficient to eliminate the pejorative speculating on his mental statement, because there are many extraneous deportments through presidential campaign. The same is after election period. These and many others psycosocial and sociocultural implications has contributed too critical level of speculating. On the other hand, the universal stigma of mental health/illness have encompassed the misery of this ashamed labeling. Aside many political, diplomatic and social repercussions, the worldwide speculations on Donald Trump's personality ruins the up to date psychiatric treatment of mental disorders. So, it is preferable to make effort to promote and affirm the importance of mental health service in community all around the world. Functional and efficient psycho-education must be priority of every society, beginning from family, schooling and community. It ought to undertake substantial official and political measures to increases the conscience on mental health, in order to eliminate primitive and atavistic attitudes toward mental heath issues. Without these radical and universal captures the misunderstanding and prejudices on mental pathology would continue.

I agree. Donald Trump is the POTUS so we should support his 'good' decisions and not ridicule every angle of his being such as mental health. If he has a mental health issue then we should encourage his recovery. My ex-wife used my anxiety and depression as a grounds for her request for divorce. Her attorney wrote it up and the Judge accepted it (of course she never mentioned her boyfriend). I lost a lot. Today I am recovering and just keep my mouth shut.

Well if there is any doubt, let us let him get down and dirty into therapy. And in the meantime lets get someone else to be my president. My needs "trump" his when he is in that role and on that crucial issue. I need someone who is not "in question" in widespread ways and by many people on that. I don't think we can "love" and "respect" him on this issue when he is using and abusing all the power we entrust in him as a president!