Refusal to Pay for Self-Harm Treatment

I started self-injuring in college, and needed treatment for my injuries on a one occasion. I went to the student clinic, and after much prying, confessed that my injuries were self-inflicted. The nurse referred me to the student counseling center (by which I mean she took me by the arm and escorted me there), and I thought that was the end of it.

Little did I know that my insurance company refused to pay for the medical treatment since my injuries were self-inflicted. As if that weren't bad enough, they sent a letter to my parents detailing why they were refusing to pay for my treatment. So now I had to deal with being outed by my insurance company to my family, who were still in denial I had a mental illness.

Self-Injuring for No Reason 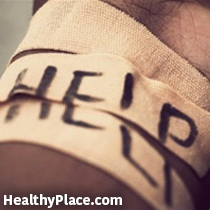 I thought this was just me, but an Internet search proved otherwise. Several people feel like self-injuring for no readily apparent reason. Everything could be fine at first glance and we could still want to do whatever self-harm action we usually do. That's because self-injury is addictive, familiar, and compelling.

Self-injury releases endorphins, also known as "runner's high." Pain releases these feel-good chemicals, which can also be released by sex, drugs, and alcohol. Like anything that feels good, it can become a compulsion. It can become a habit. Self-injury is addictive and compelling, and it can become a familiar way to cope with our feelings. It straddles the line between addiction and habit. That's why sometimes we feel like self-injuring for no reason.

HealthyPlace notes that one in five females and one in seven males self-injure. That's an awful lot of people. You are not alone. Females account for 60 percent of self-injurers, but it's not just a girl thing--guys do it, too. Approximately 2 million cases are reported annually. The real number may be higher as so many people hide the behavior.

There is nothing to be ashamed of if you self-harm. You are coping with extreme pain in the best way you know how. But there are other ways, and it is important to learn them. For example, you could try drawing slashes on yourself with a red marker. You could put a rubber band on your arm and snap it when you feel the urge. You could hold ice on your skin. Recovery is possible.

So that's three things few people know about self-injury. Insurance can refuse to pay for treatment. Sometimes we feel like self-injuring for no reason. Self-harm is widespread. There are a lot of myths and ignorance about self-injury, and talking about it is the first step to treating it.