Staying in Domestic Violence Reason One: Preserving the Marriage

While things have improved, there is still a stigma to divorce, especially in religious settings. Some religious groups would prefer to sweep abuse under the rug in the name of the sanctity of marriage. Marriage is seen as providing a safe, loving, and stable environment for the married couple and the children, so it is believed the marriage must be preserved at all costs. 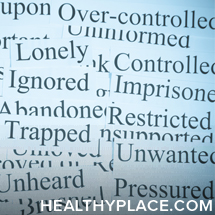 If I had a dollar for every time I've heard of people being told to return to an abusive situation because "It's God's will," "You just need to be more submissive," "You pledged until death do you part," or "God wants you to stay together," I'd go backpacking around Europe for a year. No, it is not God's will for a person to be abused. No, being more submissive will not help the situation. No, you're not supposed to face death at the hands of your spouse. No, God does not want you to stay together when the marriage covenant is broken by violence.

Human beings must not be sacrificed on the altar of devotion to marital permanence. Maintaining a facade of marital well being must not take precedence over protecting vulnerable people. Before women and children are told to return to violent men, the church must do everything in its power to make sure the violator is confronted, his behavior changed and monitored, and the home made safe for all people (Batterers Intervention: Help For Batterers).

Staying in Domestic Violence Reason Two: Men "Should" Be Dominant and Women Submissive

According to Heggen, arguments along these lines include:

The problem with this is woman was created to be a partner, implying equality. As a popular wedding quote by the otherwise misogynistic Matthew Henry observes:

The woman was made of a rib out of the side of Adam; not made out of his head to rule over him, nor out of his feet to be trampled upon by him, but out of his side to be equal with him, under his arm to be protected, and near his heart to be beloved.

Love and violence are incompatible. When a ruler uses fear and violence to maintain his power, we call him a tyrant and argue for his removal from power. The same holds true for marriage.

Some argue that because Eve ate the forbidden fruit first, women are morally inferior to men. Their judgment is not trusted. Women are more easily led astray. The problem here is a selective interpretation of Scripture--according to the Bible, Adam was with Eve when she ate the fruit.

Women who believe they are mentally and morally inferior are more likely to doubt their instincts that something is wrong. They are more likely to believe their abuser who says, "It will never happen again," "This is just discipline," and "You're making a big deal out of nothing." When women feel they are untrustworthy, they will act as if they are untrustworthy. "As a man thinketh, so he is."

Religion can be a powerful reason why people stay in domestic violence situations. Yet it can also be a powerful force in the decision to leave. But when people stay, one of these three beliefs is almost always present.

In addition to the above mail...A wife (like my Mom) or any person will continue to live under abuse because she has had Clinical Depression, with mental illnesses and therefore, unthinkable abuses from the husband (my father) would continue...All of us in that house was dysfunctional, and if a family member was able to come out of it all, was called a Survivor

I could not overlook that some of these posts are religion based, and I guess that religion can help or give a sick person false hope.
Yes, there are 3 important reasons for the Abused to stick around domestic violence...In living with a home where there was alcoholism, drugs, severe abuses...The abuse was mostly against my mother, then maybe me, and then perhaps my brother all that going on day in and day out.

I think your article is biased. First the divorce rate in America between religious and non religious is pretty close. About 5% difference.
Also there are many abusive women. More than you think.
Cities where divorce is high or non marriages are also often the area where crime and violence is highest too. Many single parents.
And Jesus was born of the Virgin Mary, the seed of a Woman. Not Man. So that puts a female at a pretty high position. Joseph a little bit lower.
Anyway, you sound like a Christian and man hater than a writer trying to prove a point.