Myth One: Self-Injury Is Attention-Seeking Behavior

I first started self-injuring in college, and I went out of my way to cover it up. When that didn't work--people get a little suspicious about long sleeves in the middle of summer in the middle of Texas--I lied about what happened. When I was finally caught, I was upset. That's not attention-seeking behavior. 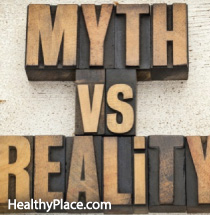 According to self-injury.net, the first high-profile person to admit to self-injury was Lady Diana Spencer, who told the British Broadcasting Corporation (BBC) "You have so much pain inside yourself that you try and hurt yourself on the outside because you want help."

"It’s about finding a friend," she told People magazine, according to self-injury.net. "I could always rely on cocaine and the same thing goes for cutting . . . You want to find that first initial high. You’re in love with your addictions, and they can’t say no to you. So you have to find out how to say no to them."

No one chooses to be addicted for attention. People become addicted as a way to deal with pain.

Self-harm is thought to be directly linked with suicide but this isn't the case. The two are actually as different as night and day. Unfortunately the two oftentimes get grouped together because both are inflictions of pain and sometimes people who begin with self-harm may later commit suicide. Generally people who self-harm do not wish to kill themselves; whereas suicide is a way of ending life.

While I am a cutter, my cutting has never been about suicide. It has always been a way to deal with unbearable pain. While I have attempted suicide, it was never as a result of self-injury--on the contrary, self-injury was about feeling better, not giving up. A self-injurer still has some hope things will get better, while a suicidal person does not see any other way to escape the pain.

While many people think self-injury is a uniquely adolescent girl problem, males and females self-harm in equal numbers, according to Dr. Peggy Andover. While adolescence is the main time for people to start self-harming, it is not a problem one outgrows. For example, I didn't start self-injuring until my sophomore year of college, and I wasn't able to fight it until my early 30s. I'm now 36 and still self-injure at times. It's going to be a lifelong battle, even if it does get easier as time progresses.

People who self-injure are not immature, they are coping with more than they know how to manage. People of any age can find themselves turning to self-injury after trauma, during stress, or to cope with mental or emotional distress. ... Adults of all ages can turn to self-injury, and come to rely on it as their primary coping strategy. Some adults may have hurt themselves in their youth and so return to self-injury in times of distress; others may turn to self-injury for the first time in their adult years owing to life events beyond their control, and the accompanying stress.

These are three of the most common myths about self-injury. Education is key to helping people realize that these three myths are just that--myths. We need to speak out when we hear these myths in order to educate others, break down the stigma of self-injury, and make it easier for people who self-injure to seek help.

APA Reference
Oberg, B. (2015, August 10). Three Myths About Self-Injury, HealthyPlace. Retrieved on 2022, May 16 from https://www.healthyplace.com/blogs/recoveringfrommentalillness/2015/08/three-myths-about-self-injury

Why Are Psychiatric Drug Side Effects So Severe?
Three Myths About Psychiatric Patients
Robin
October, 7 2015 at 2:04 pm

I can definitely vouch for all of these--& like Carol, especially for number three. I myself am a male in my fifties & have battled with self injury for most of my life, starting from around the age of twelve onward. I'd been sexually abused by priests & not knowing how to channel my anger and confusion, grabbed a nearby knife out of oure instinct and cut away. This was the late sixties & no one at the time knew what self-injury was (not that I wore short sleeves in sunny Southern California), but I neverthess felt hopelessly alone about it. Later, I filled both arms with tattoos to hide the scars & discourage myself from making fresh ones, but those fresh ones just relocated to my thighs instead. There's been other ways to fill that dark void throughout my life--booze & countless fights, primarily--but I ways found self-injury to be the one promising instant gratification. Yes, it's lessened significantly to the point where it's almost non existent now, but every so often if a tool or knife is at hand, the temptation's too much. I've always related it to being sober when once you were an Ohio--never quite goes away

Myth 3 is the one I can relate to the most. I first self-injured as a teenager. I lived on the Navajo reservation and had never heard of self-injury, I just figured out when I hurt myself I felt a sense of relief. I was sexual abused at 9 by my step-brothers. Although not raped by my step-dad, he was sexual inappropriate, and mentally abusive to my sister and myself until we graduated from HighSchool. Long story short... self-injury can happen at any age. I was retraumatized as an adult and started cutting again at 42. I am now 59 and it can still be a struggle. I was in a DBT group and I would say most everyone was 30 and above. I am happy to say with a lot of therapy and work on my part it has been over a year since I have self-imjured.