What are three myths about psychiatric patients? There are many misconceptions about mental health consumers, largely fueled by stigma and ignorance. I've dealt with three psychiatric patient myths over the course of my life, each one harmful in its own way.

I will admit to groaning every time there's a high-profile crime committed that involves a psychiatric patient. We have enough to deal with without the public thinking we're ticking time bombs. While the average mental health consumer is more likely to be the victim of violent crime than the perpetrator, this is not what people believe. Former United States Surgeon General David Satcher wrote: 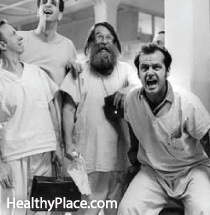 This is another common psychiatric patient myth. A mental health diagnosis does not mean the person lacks intelligence. But for some reason, people assume that mental illness equals intellectual disability. In my state, Indiana, state psychiatric facilities routinely hold people who are not mentally ill but have an intellectual disability--as recently as 2008 these people were referred to as "M.R.s". This may be why so many people think psychiatric patients are stupid.

While there are some psychiatric patients that don't know what's happening to them, the vast majority do. My former landlord seemed to believe this myth. The apartment complex was infested with bedbugs, roaches, mice, and rats. The landlord refused to do anything about it because we weren't credible due to our diagnoses. But trust me, I was aware that my conditions were unacceptable.

This myth is why it's so hard to file complaints without a corroborative witness. I know of one case where there was a recording of a person being abused who got justice only because her social worker had a copy of the recording. People need to understand that psychiatric patients are aware of our treatment.

Those are three myths about psychiatric patients that I've encountered. What myths have you heard?

Psychiatry is a joke. I was diagnosed as Bipolar after being in the system. Turns out that it was really undiagnosed Diabetes which can mimic the signs of mental illness. But like with Covid, there’s money to be made with diagnoses. I do agree with the article however, when you are diagnosed with a mental illness, all of a sudden people do think that you are some kind of moron who doesn’t understand anything. And some of the so-called psychiatric professionals don’t help either. Of course people are going to be triggered when they are talked to like they are five year olds.

I'm so sorry to hear that happened to you. I was also misdiagnosed with bipolar disorder, so I feel you. But I'm not sure I would go so far as to say psychiatry is a pseudoscience. It can help a lot of people, myself included, despite my misdiagnosis.