When I was in college, I witnessed an assault. I literally felt something snap inside me that night. I blamed myself for not being able to stop it, and decided to take not one, but two martial arts classes to make sure that never happened again. I signed up for a shotokan karate class and began studying yoseikan budo aikido in my spare time.

My aikido instructor was a psychologist who said "The philosophy of aikido is that you can't control others if you can't control yourself." Aikido, I later learned, was considered a "soft" martial art: the goal was to redirect your opponent's aggression, not to respond with equal force. The goal was not to counter-attack, but avoid. As a black belt once told me, "Avoid rather than block, block rather than strike, strike rather than maim, maim rather than kill because all life is precious and can never be replaced." 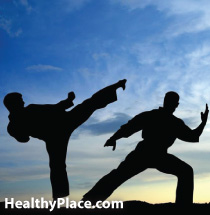 As I learned more in my aikido class, the anger began to lessen. And when the anger lessened, so did the symptoms of posttraumatic stress disorder. My mental illness symptoms improved as a result of the martial arts training. I learned to redirect not only an opponent's aggression, but also my own. Eventually I told my sensei about the assault, and he encouraged me to find a therapist. The combination of martial arts and therapy helped me gain control of my anger.

While sparring is an excellent way to know what you're capable of should push come to shove, it's not the main way to gain confidence. I found that I believed in myself more after I broke my first board.

The first step is to acknowledge your fear. The second is to believe in yourself. The third step is to use your training and break the board. Once you do that for the first time, your confidence level increases tremendously. Using coping skills works much the same way. Once you know that your training works--whether it's breaking a board with a reverse elbow strike or using meditation to redirect self-harm urges--you feel more confident and believe that since you've done it before, you can certainly do it again.

Remember, it's easier than it looks.

Recently I was participating in a martial arts workshop. The instructors talked to us about setting our boundaries and sticking to them. We were encouraged to speak up if we were uncomfortable, we were told we did not have to try anything that made us uncomfortable, and we learned how to say no and, if necessary, redirect an opponent's predatory violence.

The ironic part of martial arts is that you are supposed to become so good at fighting that you avoid fights. The first step was to carry ourselves with confidence. The second was to make eye contact and use assertive body language. The third was to use an intense tone and yell "No!" Most people, with the exception of predators, will be redirected by these three steps. And using these skills helps you establish your boundaries and prevent them from being crossed.

APA Reference
Oberg, B. (2015, May 18). Mental Illness and Martial Arts: An Interesting Therapy, HealthyPlace. Retrieved on 2021, July 27 from https://www.healthyplace.com/blogs/recoveringfrommentalillness/2015/05/mental-illness-and-martial-arts-an-interesting-therapy

It stood out to me when you explained that martial arts can help with confidence by helping us learn assertiveness. I've been struggling to feel confident in myself and my abilities ever since I got divorced at the end of last year. Maybe I'll look for a Kobudo class I could take since I'd enjoyed learning a more unique branch of martial arts!

My own experience Is that Martial arts is best taught hand in hand with philosophy , and it gives focus , instills self discipline , keeps you healthy , socaible , confidence , self beleif , all in all if martial arts becomes a way of life , then that brings constant healing ! Justin

I like you believe martial arts can be excellent therapy for some one with a mental illness.
However , After observing the violence associated with. MMA. I have a dfficult time recommending that discipline as a form of therapy.

I have actually developed an entire life skills program based on Martial Arts concepts. What the program entails is introducing a concept such a balance, and learn how being unbalanced can be detrimental to physical and emotional safety. People who participate in these seminars have felt empowered. My question and issue I am facing now is to who I market this program when the basic attitude towards the martial arts are based off of Hollywood and MMA fights? I have shared this article on my page.

Mental illness can lead to struggles with poor self-esteem post diagnosis, as a person acclimates to what is often an entirely new life. Mixed Martial Arts (MMA) offers a mix of challenging training techniques that provide immediate achievement and gratification in a world where those outcomes are delayed. Simple things such as making it through drills without passing out, adorning a pink gi, and securing your first arm-bar go a long way in increasing self-esteem. People with mental illness and decreased self-confidence may socially isolate themselves, and MMA training is an opportunity to join a social network (outside of Facebook) that relies on their presence. Feeling needed can be therapeutic.

http://www.nvahkd.com/Pages/Hapkido_and_ADHD.aspx
I have conducted extensive research on the subject of martial arts and its benefits in mental health, particularly for attention and behavioral disorders, depression and anxiety. I have worked over the past 18 years with people suffering from everything from Schizophrenia, bipolar disorder, autism, ADHD, depression and anxiety. I also run extensive groups on trauma recovery focus on martial arts specifically for women. The detail here is that like everything not all martial arts are good as an alternative behavioral therapy and not all martial arts instructors can effectively deliver their teachings to help people with this difficulties. My experience has been that good instructors that understand the martial essence of martial arts (ie; discipline, respect, perseverance, indomitable spirit, self-control…) can truly deliver their martial teachings in such a way that can benefit individuals with all sorts of disabilities and or emotional difficulties. What makes it even better is if the instructor has had some training and understands fluidly the importance of adaptive teaching, in order to accommodate the particulars of a student. There is an abstract of one of my studies on ADHD and Martial arts on the link above . In the page there is a link to my doctoral dissertation.

Another interesting offbeat article from Ms. Oberg! Your blog makes me think about things in a new way, and consider possibilities I wasn't even aware of. Yet you don't sugar coat or simplify things. I really appreciate your work!