Mental Health and the Struggle for Gay Rights 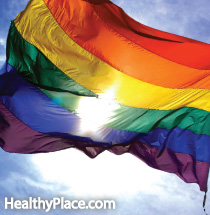 Imagine seeking out a state-licensed therapist to help you when you're questioning your sexuality, only to be told you're going to Hell. Imagine trying to transition gender while in treatment with someone who wants to "fix" you. Imagine a therapist or a psychiatrist who accepts your insurance refusing to treat you because of your sexual preference or gender identity. We wouldn't permit a therapist or psychiatrist to refuse to treat Jews and call it a religious belief. Why should the LGBT community be any different?

Anecdotal evidence shows that due to stigma, rejection and trauma, the LGBT community has unique mental health needs. That leads to concern number three: conversion therapy.

Conversion therapy, also called reparative therapy or Sexual Orientation Change Effort (SOCE), is the attempt to change an individual's sexual preference. According to NCLR, conversion therapy not only does not work, but

In 2009, the APA [American Psychiatric Association] issued a report concluding that the reported risks of the practices include: depression, guilt, helplessness, hopelessness, shame, social withdrawal, suicidality, substance abuse, stress, disappointment, self-blame, decreased self-esteem and authenticity to others, increased self-hatred, hostility and blame toward parents, feelings of anger and betrayal, loss of friends and potential romantic partners, problems in sexual and emotional intimacy, sexual dysfunction, high-risk sexual behaviors, a feeling of being dehumanized and untrue to self, a loss of faith, and a sense of having wasted time and resources."

The goal of reputable therapy is to help with these issues, not cause them.

Conversion therapy, itself, raises some questions about the sanity of its practitioners. NCLR reports:

According to a 2009 report of the American Psychological Association, the techniques therapists have used to try to change sexual orientation and gender identity include inducing nausea, vomiting, or paralysis while showing the patient homoerotic images; providing electric shocks; having the individual snap an elastic band around the wrist when aroused by same-sex erotic images or thoughts; using shame to create aversion to same-sex attractions; orgasmic reconditioning; and satiation therapy. Other techniques include trying to make patients’ behavior more stereotypically feminine or masculine, teaching heterosexual dating skills, using hypnosis to try to redirect desires and arousal, and other techniques—all based on the scientifically discredited premise that being LGBT is a defect or disorder.

No one, especially not a person in pain, deserves that kind of treatment.

Mental Health and the Acceptance of Gay Rights

Acceptance of gay rights prevents or drastically lowers the risk of the problems I've mentioned. It needs to be safe to explore one's sexual identity. Sexual identity makes up the very core of a person and should be tolerated as part of a person's identity. Homosexuality is not a disease and has not been considered such since 1973.

'[R]eparative' therapists and the 'ex-gay' ministries offer false 'hope' and magic 'cures' for desperate people, then turn around and cruelly blame these folks when their bizarre 'treatments' fail... '[R]eparative therapy,' which seeks to change homosexuals into heterosexuals, was -- and still is -- rejected by nearly all respected, credible medical and mental health experts.

It's time we as a society did the same. There is no right to actively harm another's mental health and call it freedom of religion.

APA Reference
Oberg, B. (2015, March 30). Mental Health and the Struggle for Gay Rights, HealthyPlace. Retrieved on 2022, August 9 from https://www.healthyplace.com/blogs/recoveringfrommentalillness/2015/03/mental-health-and-the-struggle-for-gay-rights