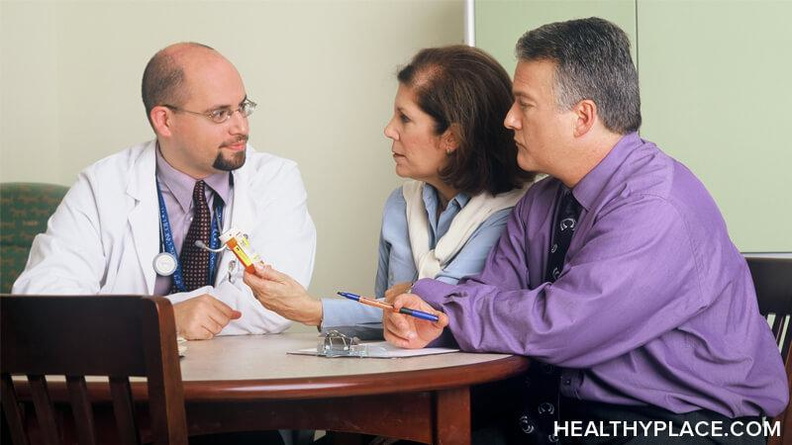 One of the worst things about having a mental disorder is the symptoms the mental disorder causes. These symptoms are the cause of much suffering for those of us who have received a mental health diagnosis. We face our symptoms every day, sometimes every minute of the day. They can cause us to see the world and the circumstances of life very differently than people who aren’t mentally ill.

Because we sometimes perceive things this way, we occasionally come into conflict with people. It’s often family who don’t comprehend our behavior, especially since they see us at our worst. Misconceptions can, and do, happen, frequently, on both sides. Of course, it’s not only we who misperceive. Misperceptions can lead to stereotyping, part of mental health stigma. Let’s look at some examples of these stereotypes.

Examples of Common Stereotypes of the Mentally Ill

I can be lazy but I'm not a lazy person. Sometimes people mistake our inaction as laziness. I can understand coming to that conclusion when confronted by a person who lies in bed for much of the day.

But what they don't see are the things that cause our inaction. Depression saps both your physical and mental strength, sometimes leaving you a semi-lifeless pile of humanity whose best friend is the bed. If that's not enough, the diagnostic criteria for depression states the following symptoms, among others.

Problems with the sleep cycle can really wipe a person out. There’s a reason sleep deprivation is used as a torture method. It just basically messes up everything. Our bodies have a cycle known as circadian rhythm. Basically, it means our bodies run on a 24-hour cycle. Research has shown disturbing this process to be detrimental to the health of individuals.

This is slightly different than disturbing the sleep cycle. This is the sapping of almost all strength from the sufferer. Things people take for granted, like brushing their teeth or taking a shower seem like colossal tasks that are nearly impossible to perform.

Additionally, although I haven’t done an exhaustive study, I'm not aware of any psychiatric medication that doesn't have at least some degree of drowsiness as a side effect, some more than others.

These are but a few of the causes of exhaustion and lethargy among the mentally ill. Given these circumstances, how can a person in this situation be fairly judged to be lazy? It’s almost ridiculous when all the facts are known, especially considering the multiple causes.

Given these reasons, we’re not lazy. We’re sick, medicated and completely exhausted.

Some are so uneducated they think mentally Ill means intellectually inferior. It doesn't. However, there are certain symptoms that can make a person seem somewhat dull of understanding. Again, using depression criteria and criteria from several mental health conditions, let's see what might be responsible for this.

Again, not an exhaustive list, but enough to explain cognitive difficulties and to respectfully suggest we not be judged to be imbeciles because it might take us a little longer to pick up on something.

Not a Stereotype, But Should Be

Considering these points, it’s amazing we’re not all drooling in a corner. But we aren’t, and this is why these stereotypes don’t hold up. Millions of mentally ill folks get up and go to work every single day. They take care of their children and pay their bills on time, all while suffering from the symptoms of their illness and from some of the stigma they must live with. If you ask me, these people are not only extraordinary, but heroic.

I read these and understand. My problem is related. Sleep un-pattern=being up for18 to46hrs., laydown time 2 to 22hrs. Sleep comes in 20 to 40min. intervals, if at all, with sitting on edge of bed till i nod off, then lying down to get the kinks out. Do dishes, cook, eat, shower. Most feel, in my experience, that if you are not dirty or starved, then you are ok. Needless to speak of my pain, lethargy, hopelessness, guilt, and unwanted, except to pay bills. Doctors claim nothing wrong, physcally, cept for nigh bp, chol., type 2 diabetes so know im seeking psy. help. Been a month, unknown results but dont think they believe me. Only hope i cling to, barely is survival mode, for who knows how long. Thanx.

This article helped me feel better. Thank you for sharing. This does help me feel better. I have a really harsh living situation. My family assumes that I am lazy, and sometimes even stupid. I don't think they really understand. I know how hard it is to get through the day when I am suffering depression. I like the idea that people get by with mental illness is heroic. I think that going through homicidal or suicidal phases without anybody dying is miraculous.

Can relate, especially about being termed lazy or stupid and people talking down to me. grr.
Oh, by the way, please DON'T use the word "retarded". It is offensive.

Hi Rhona.
Thanks for bringing that to my attention. Although I didn't realize that term had become offensive, upon research I learned that it is indeed considered an offensive epithet. It certainly wasn't my intention to offend anyone, nevertheless I did use the term and for that I apologize. You'll note I have changed the text of the article. Thanks again.

All of this is so true, every body should read this so that people would have a much better understanding, thank u x

I don't get up and go to work every day. I score above average on any intelligent test. Naturally, people ask why I don't have a job. The answer is simple- just getting through the day (or whatever my sleep/wake cycle happens to be) takes everything I have. People also call me weak because I can't deal with pressure. Again, simple- my mood cycles are already barely manageable ( sometimes not all) and pressure just shifts the cycles into high gear.

Thank you for sharing this insightful and thoughtful information...I am passing it on. Unless one has been through trauma themselves (I think) it is very difficult to convey real empathy when relating with this. This includes, unfortunately, even the so educated ones. It takes a special understanding and empathetic one to comprehend what navigating yourself on a daily basis and moving on is! A REAL Challenge. I know! I wish all who must be strong in facing these daily challenges my best for you to be graced with such loving souls that will make this trip a most pleasant and not so lonely of a ride. PEACE in Solidarity with YOU...