Last week brought me a lesson in the need to be prepared when mental health triggers come, as they inevitably do in our recovery. These triggers can be dangerous because they can instantly transport us to a place of emotional turmoil and intensify our symptoms. In order to manage our illness, we must be prepared at all times. We never know when we can be triggered and we need to take steps to ensure we and others around us are safe.

This past week, there was a national firestorm with the release of American POW Bowe Bergdahl from captivity in Afghanistan. I had not known the story prior to this, but when I heard the circumstances of his experience, I was triggered in a way that hasn’t happened in a long time.

You see, many details of Bergdahl’s capture were similar to an experience I had while serving in Iraq in the first Gulf War. He was on guard duty, as was I. He left his camp and wandered into the night. I did the same. He wandered in the desert until he was finally captured by enemy forces. I wandered in the desert night too, terrified I’d run into the enemy, or be lit up by friendly fire.

There are different accounts of why Bergdahl left the camp and there will be an investigation, as some members of his unit have accused him of desertion. I don’t know what happened, but I know what happened to me.

Lost and Wandering in the Desert Night

I simply got lost. The Iraqi desert is completely flat, so there are no fixed objects such as trees that a person can use to navigate. I was functioning as the Sergeant of the Guard, so it was my responsibility to ensure all the soldiers on guard duty were up and ready to go. For this reason, I was required to walk to each of their positions and make sure they had everything they needed to complete our mission.

While moving between guard points, I lost my bearing. The pitch black Iraqi desert made it impossible to find my way. As I walked, bombs were exploding in the night, filling me with dread that I might be blown to bits. But my biggest fear was running into the enemy. I had to find my way back to our position. So I walked and walked, not even having any idea what direction I was going.

It’d be safe to say I was nearly paralyzed with fear. The fear of dying a violent death was paramount, of course. But there were other fears, too. What if I get in trouble for “wandering” away? What will happen to my young family? 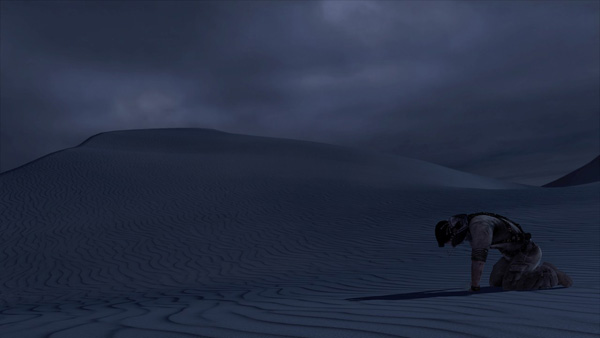 After hours of wandering, I could hear people talking. I froze in place. Had my worst nightmare come true? Had I run into an enemy guard post? Thankfully, I realized the voices were speaking English. They didn’t know I was there and I was petrified of saying anything that might cause them to react. The only thing I could think to say was, “Don’t shoot; I’m an American.”

My fellow American soldiers greeted me as I told them of my ordeal. They explained they were part of my parent unit, and they’d run communication wire to my camp. They showed me the wire going to my camp. “Follow it,” they said, and promised I would find the camp. I did as they said and indeed followed the wire straight into my unit’s position. I'd wandered alone in the desert for five hours.

Triggered and Disturbed by Symptoms of Posttraumatic Stress Disorder

With the similarities of some of the details I was massively triggered, and the posttraumatic stress disorder (PTSD) symptoms were in full swing. I was having all the classic symptoms, flashbacks, intrusive memories and other symptoms of PTSD. I had to dig deep into my wellness toolbox, and with some support from my sons, I survived.

Don’t wait until you’ve been triggered and you’re feeling messed up. Plan today. Put together a wellness toolbox. Have it ready. Have some support lined up. Then when the storm comes, you'll have what you need to survive.

Hope - the Foundation of Mental Health Recovery
Understanding the Mentally Ill: Fighting Stereotypes with Facts
Mike Ehrmantrout
June, 17 2014 at 6:25 am

Uh...heck if I know, Sue. :) Something about stimulating the brain somehow.

It is especially difficult to forget diagnosis when family is not very supportive. And use your diagnosis as the excuse. I mean, really? Do they think I enjoy?

Hi Patricia. What you describe is an experience that scores of mentally ill people deal with. Unfortunately, there isn't much that can be done if people refuse to acknowledge reality. I've literally taken to sending an educational link to HealthyPlace articles to these folks and asking them to read it. If they refuse to read it, I won't discuss anything about it with them anymore because they aren't taking the subject seriously. I know that's very difficult with family members, but sometimes it needs to be done for your own peace, family members or not.

I have bipolar with PTSD...i have not yet learned my triggers or what a wellness toolbox is. Can anyone guide me in that direction?

Hi, Brittany. In the article where the words are
wellness toolbox
and
triggers
, there should be a link to other articles on HealthyPlace that can inform you about those. Just ckick on the linked word and you should be good. If you run into any other problems, please contact me and I will ensure you find what you are looking for.

This aricle really helped me & gave me new information on how to help my mental recovery! I learn so much from all of u! I want to b informed as much as possible! I dont have good mental health care so I have found to really rely on Healthy Place! Again, Thank u sooooo much! XOXO

Hi, Lisa. Thanks for commenting. I'm very happy that you found some encouragement in the article. Keep reading!

Hi, I'm glad you enjoyed the article. I'm sorry for the RSS issue. Unfortunately, I personally don't know how to fix that issue, but I will give you a link to contact someone who might be able to help you. http://www.healthyplace.com/how-to-contact-us/form/1-healthyplace-contact-form/

I am dealing with lots of anxiety…..the klonipin I take it not helping…I have found swimming helps me more than anything….I want to control my anxiety and not let it control me….I have bi polar with depression…I feel I think about my diagnos too much…I went to church but have opted out of a shower for this afternoon….I am 62 and now on disability…I have great friends and family but I know this gets old…I am waiting for medicare to be approved so I can recieve transcranial magnatism stimulation...

That's interesting about being too focused on your illness. I too sometimes get to the point where I'm just dwelling on it. It's important to recognize any time our mind is ruminating about anything, especially unhealthy stuff. It can get away from us so fast. That's cool swimming helps your anxiety. My family just bought a pool, so I'm going to find out if it helps me. I think it will because it's relaxing and it's also decent exercise.