A Year of Dissociative Living

I’ve just realized that a year has passed since I began writing Dissociative Living here at HealthyPlace. This is a pretty significant achievement for me. And that’s partly because I’m just plain proud of the content I’ve written. But this blog’s anniversary is also the anniversary of my coming out publicly as someone with Dissociative Identity Disorder. By choosing to write Dissociative Living I also chose to stop writing anonymously and from that point on, attach my real name and real picture to my thoughts and perspectives on DID. It was a pivotal decision and one that, had I asked, most people would have advised against. One year, three weeks, eighty-two posts, and a thousand comments later, I don’t regret it even a little bit. 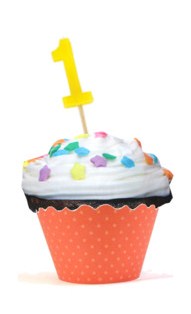 In the past year I’ve received a lot of emails and comments from people who use the word “brave” to describe my choice to write publicly about Dissociative Identity Disorder. But the truth is this blog gave me that opportunity. I couldn’t ask the largest consumer mental health site on the web to give me a platform for publishing my words without my own willingness to publicly stand behind them. In other words, my credibility as a mental health writer depends at least a little bit on my authenticity. Writing Dissociative Living gives me a solid foundation to stand on and say, “Hey world, I have Dissociative Identity Disorder!” Most people don’t have that foundation. For many, keeping a job means keeping silent about their diagnosis. And if they write about it, they must do so behind a pseudonym. But my job is talking about Dissociative Identity Disorder. My paycheck doesn’t depend on my ability to hide parts of who I am. When it comes to the issue of disclosure, I’m not so much brave as I am lucky. Dissociative Living is a gift.

Dissociative Living and You

I admit it did take courage to unwrap this particular gift. On July 21st, 2010 I wrote on my personal blog, “I’ve thought a lot lately about disclosure; and while there is relief in considering coming out of the closet as someone with Dissociative Identity Disorder, I can’t predict with real accuracy whether doing so will truly be the relief I envision.” I worried, among other things, that no one would read Dissociative Living and I’d just be hanging out there in my skivvies so to speak, talking to myself. And that’s where you come in. Every person who took the time to read my blog, whether it was one post or many, has helped make it a success for me. Whether you’ve commented with a question, a criticism, or simply a note to say hello, each of your comments has helped create dialogue. And that’s where I believe the real change happens … in conversation, in the sharing and challenging of ideas.

I am so grateful to HealthyPlace and to you for giving me the opportunity to write about Dissociative Identity Disorder. Here’s to another year of Dissociative Living!

Holly,
Congrats and keep up the good work. I accidentally opened your site and found it interesting and applaud you for the courage and commitment.
Dennysan
Yokosuka, Kanagawa, Japan

@Stephanie Thank you! I always enjoy reading your comments. You've brought valuable insight to many discussions and I really appreciate that. Also, I can't wait to use clue-by-four in casual conversation. ;)
@Dean Hello friend! Great to see your name. Thank you so much not just for your lovely note here, but also for reading. That means a lot to me.
@kerri I almost don't have words ... I am very moved by your comment. Thank you. And thank you for the insight you share here at DL. You're comments always make me think. Thank you, thank you.

Hi Sherry,
So good to hear from you again and get an update on your daughter. I'm angry at the physician who treated you and your daughter with such contempt in the emergency department. It's alarming how hostile people can be about this diagnosis. I believe that it's ignorance that allows that nastiness to flourish. And I believe that, in time, it will be a rare and shocking thing to hear a physician respond that way to this diagnosis.
I am so happy about your daughter's overall progress and really pleased to know that you intend to become a therapist. We need more clinicians in the field of trauma and dissociation. It's so good to hear you're going to be one!
Looking forward to hearing from you next time ... :)

Hi Holly. You are amazing. I am so fortunate someone I respect told me of your blog and I took a look. I have learnt so much from you in the last year. You've challenged me to look inside for my own answers, and brought a great amount of clarity to my personal struggle with DID. I know myself better because of you, and have truly felt more empowered to stand up for myself in therapy because of your guidance and information. The word Thank you seems so small compared to how I feel. But it is truly sincere. THANKYOU.

Super-crazy proud of, and happy for you Holly :o) I've drawn so much inspiration from your courage...plus tons of insight into my own struggle. Thank you friend!

Congrats on the anniversary!! I always enjoy reading your blog :)

Hi Holly,
Another thank-you from the adoptive mom of a teen daughter with DID. Your blog has been an inspiration for my advocating experiences, appreciated place to "talk" occasionally, and a reliable support when I feel like my daughter is going to succomb to the horror of dealing with her profound Post Traumatic Stress Disorder episodes.
Services in our home province of Nova Scotia, Canada, are inadequate and mostly ignorant to the complexity of DID. Our children's hospital, which services my daughter until she turns nineteen, is a teaching hospital who has my daughter seen by inexperienced resident psychiatrists in emergency situations. When I have to call for emergency transport for my daughter to the emergency department ... I feel like running myself. It can only be imagined what this does to adding trauma to my daughter.
On my daughter's last visit to the emergency department, the attending resident psychitrist informed me and my daughter that she herself had never seen anyone with DID. She looked down her nose at my daughter's diagnosis. I asked her why she thought it was, if she was in her 3rd year of psychiatry? She answered, "It's rare". I answered, " It's not that is is so rare, as it is the ignorance of the medical professionals in Nova Scotia that support the lack of diagnosis". She ordered me and my daughter out of the emergency department in 10 minutes, or we would be removed by the police. An aggressive alter came out (the one who was causing my daughter's to be unsafe), and my daughter suffered not only mental injury, but physical injuries as well, from the psychiatrist's ignorance. My daughter ended up admitted to inpatient 2 days later.
On a brighter note, my daughter is moving forward. Admissions to inpatient have spiraled down from inpatient for a solid year in 2008-09; to three 4-7 day visits in this past year. For the first time in five years, I am writing tonight from an empty apartment with my both daughters off to a week long camp! I knew this day would come , when my daughter would make it back to this capabiity, and now she has. Even if her anxiety cuts the adventure a bit short, it is still a hell of a long way from where she came from. She truely is a survivor
At 49, I am starting university in September to begin my journey of studying to become a therapist for youth suffering from truama and it's disorders; realizing I will need to do educating outside of my home province eventually. I have a unique blessing that most therapists do not have - I adopted this wonderful daughter, and through her life with DID I understand the disorder; because I kiss it goodnight every night, and I wake it up every morning!
Thanks for all you do Holly.

Thanks, everyone! I'm so glad to have you all with me. I could talk to myself about complex dissociative disorders but I wouldn't learn nearly as much. ;)
I like Alistair's word ... we're trailblazing, all of us!

Congrats on a year of trailblazing!

Thank you Holly for all your hard work, excellent writing and courage. i learn so much from this blog and feel so much better every time i read it. you bring hope to me and i'm sure to others. you have made a huge difference in my life. Thank you and congratulations!

Reading your blog and hearing how out going and confident you are with all this...it's given someone like me that's trapped in a pit of hell the realization that, yes im at a point in my life where survival is key, where everything fails...but I come here and read your posts and I see a glimmer of hope.. I've read some posts over and over again, I always fund something I missed or didn't fully understand. Tom chocren said "Life is a highway" I believe it, this blog is like that one restaurant stop along the way, where you'll always leave full & happy!
Keep up the great work Holly, the rest if us need ya! =)

Yay!! Congratulations Holly!!! You made a very courageous decision the day you chose to tell the world about yourself and your diagnosis. You showed courage with every post you wrote. And your courage has helped so many to know they are not alone. You are awesome and you should be very proud of yourself and all that you have accomplished!!! I know I am proud of you and so very thankful to have you in my life!!!

I'm just so thankful that I stumbled upon HealthyPlace, and Dissociative Living at a time when I was desperate to find answers for this highly misunderstood disorder. You have an amazing talent for writing about DID in a way that humanizes it, and makes it less frightening. I'm pretty sure that was your goal all along, and if I'm correct, you are fulfilling that goal beautifully.
Congratulations, and bravo for a year of doing such a fine job helping so many people who come here searching for answers.