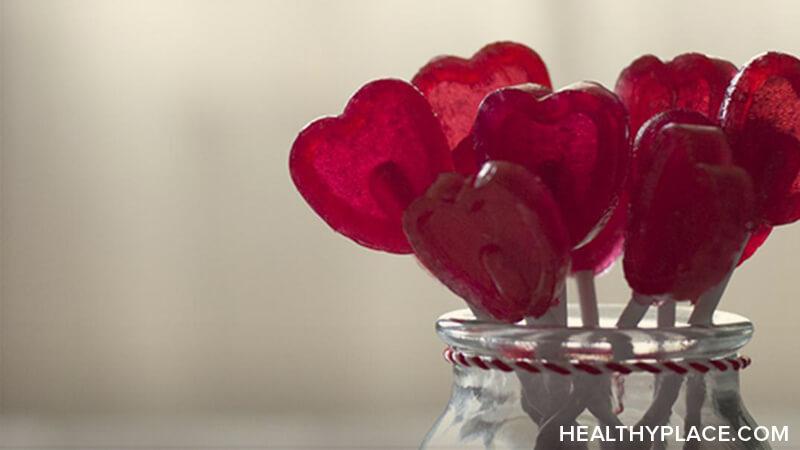 Why Does Bipolar Make One Feel They Are Unworthy of Love?

And any kind of serious illness can do this to you. When you feel irreparably broken, you truly believe that no one could love the heap of mess that you believe yourself to be.

In my case, a lot of it has to do with the fact that I haven't been in a relationship in a long time. Yes, I've had them but it's been quite a while. This fact alone seems to prove the fact that I'm not worthy of love because of the bipolar. It suggests (to me) that people can sense the bipolar just by being around me and that makes them "know" that I'm not worthy of them -- any "them." I literally feel like I have an invisible scarlet letter on me.

(Yes, some would call this self-stigma. Okay, feel free to do that. I, personally, feel it's different and deeper than that.)

And yes, spending another Valentine's Day long doesn't do much to improve these feelings. It kind of makes me want to take all that feel-good-love-yourself-on-Valentine's-Day stuff and smash it into bits with a cudgel.

But People with Bipolar Are Worthy of Love

Bipolar Quality of Life Between Episodes (During Euthymia)
When Bipolar Depression Makes You Lose Hope
DW
February, 27 2019 at 7:28 am

My parents couldn't accept me, didn't love me and were verbal about it. My adult child ( a therapist ) has told me I was just 'something they have had to deal with their whole life'. Likewise a sister who was once a regional head of NAMI.Yes, deep down I know these are really their issues but they are hard to shake off especially when you are not doing well.

Hi DW,
I'm so sorry you went through those experiences. You're right, shaking that off isn't easy at all. All I can tell you is that there are people out there who will love and accept you -- even if you haven't found them yet.
- Natasha Tracy

What a great article. Articulate and so ver real. A good reminder for balanced state of mind.