I had dental surgery last Thursday and as fun as that was, managing the pain since has been ever more so. It got me to thinking that mixing bipolar and codeine likely isn’t the best idea.

Codeine is an opioid medication and can naturally be derived from opium and a form of morphine. It is primarily used as a pain medication but can be used for a myriad of other things such as suppressing preterm labor contractions and is on the list of essential medications as assessed by the World Health Organization.

Many people take codeine in the form of Tylenol #3s which contains codeine, acetaminophen and caffeine (caffeine speeds the absorption of the other drugs and helps to combat their sedating effects).

As with all opioids, codeine can be addictive and should not be used in people with addiction disorders (typically). 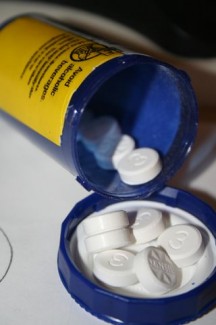 I will be the first one to say that I didn’t check the interaction list or seriously question anyone before taking this stuff. This was my bad but, in my defense, it’s sort of something that healthcare professionals should have been asking me about (I.e., What other medications are you taking?). But they didn’t. And when I went to pick up the prescription I was on sedative medication so it certainly didn’t occur to me to mount a major query offensive (walking was challenging at that point).

But, having looked it up, I can tell you that codeine/acetaminophen and even codeine alone has over 200 “significant” interactions and many “serious” (use alternative) interactions. And yes, some of these are codeine and bipolar/psych med interactions.

I’ve looked through the list and many of the “significant” interactions are either an increase in sedating effects (most antipsychotics and benzodiazepines, some antidepressants) or an increasing of potency (several antidepressants) both of which require close monitoring (according to Medscape). Here’s a sampling:

See all the drug interactions for codeine here.

There is not really any research on codeine and bipolar disorder except two case studies I found wherein codeine (and accompanying medications) was likely responsible for inducing mania.

Note that the adverse effects reported for codeine include:

And I, personally, found I had a paradoxical reaction making sleep actually more difficult rather than easier, which is what it should be on an opioid medication.

All of this is to say that it’s not very fun for me to be on yet another medication in conjunction with all the psychiatric medications I currently take. It feels rather like all the meds have gotten together to throw a kegger in my brain. I’d avoid the experience again, if I could.

(It’s also worth noting that not all interactions are going to be known and that we, as a bipolar population, are special and our reactions may simply be unusual. That’s why closely monitoring your bipolar symptoms and psychiatric wellbeing in general while going on any medication – prescription or over-the-counter – is critical.)

What’s the Deal with Sleep and Bipolar Disorder?
Crying Out Bipolar Depression
Melissa
March, 13 2018 at 11:50 am

There are so many things that come up that point me to a diagnosis, but I didn't know for so long. One of my first experiences was with codeine cough syrup when I was 16/17. I took it and was spacey and couldn't sleep. I stayed up all night finishing a school project for two days. Didn't know what I was experiencing. I had bad reactions/non compliance with anti depressants starting at around 21. Often made me feel High. Every time I've tried Vicodin, I have a similar reaction to it as the codeine. Couldn't sleep, feeling very spacey and loving everyone and everything.

I have not considered myself bipolar. I just realized that when I take pain meds after surgery or anything with codeine, I go through hypo and hyper manic. Then a few weeks later go into anxiety and some depression. Not suicide but every little thing in life looks way too big to handle. I had brain surgery over 6 years ago. Every surgery but one since I have gone through this manic situation. It took till this week with being on cough meds with codeine to realize what was happening. I refuse CODIENE for now on. The only other times I have had this manic situation is two times in over three years because of extreme stress and/or hurt. I hope this helps someone! Send me a message if you need me.

Well this is a no-brainer. If you have actually been diagnosed with bipolar disorder of any kind by a licensed trained psychologist not a common practicing doctor and you are functioning and dealing with your disorder you already know to mention any medication that you're taking with any new prescription that you're given by anyone. It is not the doctor's responsibility to inquire it is our responsibility to notify. That's why every advertisement for new medications State specifically talk to your doctor before starting this new medication about the effects they can have on any medication you are currently taking. Any type of Narcotics can cause adverse reactions in people with bipolar disorder. Either it triggers the Mania or it triggers even worse the depression because most opiates are downers. Do your research take control of your health be smart and demand questions and answers. I should know I was born with the disorder 5th generation and we're all functioning working raised families run businesses finished school went on to college etcetera etcetera etcetera it does not have to be a disorder that you become disabled by it. you can live with it and control it just like diabetes.

Honey, I believe you seriously need to rethink the tone with which you post, it’s incredibly negative and derisive.

Every medication effects every person differently. I have never had a negative reaction to codeine. In fact I use it in a medication combo for migraine treatment. However, I did have a mania reaction to gabapentin which hardly ever happens to anyone. It's all a matter of how your brain and your body react to the medication in conjunction with your other medications.

Thank you for writing about this, Natasha. I wish I had seen it sooner! I have BP-I, and a few months ago was prescribed a cough medication with codeine. I got hypomanic and couldn't figure out why until my pdoc asked me what I'd been prescribed for my cough. I had never heard of this connection before—and frankly had doubts if that was the real cause—until hearing about it today from someone else on PatientsLikeMe, and then reading this article.

"Note that the adverse effects reported for codeine include:
A false feeling of wellbeing
Paradoxical central nervous system stimulation (as opposed to sedation, which is typical)
Restlessness"
Reminds me of when my cat got spayed. I don't know the name of the pain medication they gave her after her surgery, but it was supposed to have a sedating effect, and she had a paradoxical reaction. She was wired - racing around clumsily playing with everything, her pupils enormous. It was kind of funny to watch. I wonder if she had a feeling of euphoria, too? She did seem pretty happy.
Recently, our older cat got the same med while recovering from frostbite, and she had a normal reaction - super-sleepy and cuddly.

Half of a Norco-5 (hydrocodone/APAP) per day. Best mood stabilizer ever. My psychiatrist doesn't approve, but none of the stuff she gives me works and if it does work I can't tolerate the side effects. More research is needed on the use of oxycodone and/or hydrocodone in bipolar depression.

I am bi polar and also have chronic pain therefore I need pain relief. I have not noticed any signs of mania. Am I immune? I have been on wellbutrin for 3 months now and I have been trying out meds for a year and finally feel great and happy w/out trying. I don't see how it increases the high of being on an opiate?? I have taken opiate w/out any medications and it seems pretty normal to me. Infact I know "normal" people who get way loopy taking one 7.5mg. Questionable study.

I've listed coedine as a med I'm allergic to for years and years before I got the bipolar dx. Pit made me super manic when I was a kid. Very interesting!

Correction to above: and everything was moving.

Don't forget Dextromorphan, I had the joy of discovering what that was like with Wellbutrin several months ago. I had a really bad cough and for two days I was trying to figure out why my eyes were dilated and moving.

Since getting over yet another cold during this terrible cold & flu season I've found there's nasty interactions with some of these cold and cough medications as well. It's worth checking out with a pharmacist before using. For instance with Benedryl I suffered severe sedation. Even with Cold FX I had terrible vertigo. I never had these type of problems before being on bipolar medication