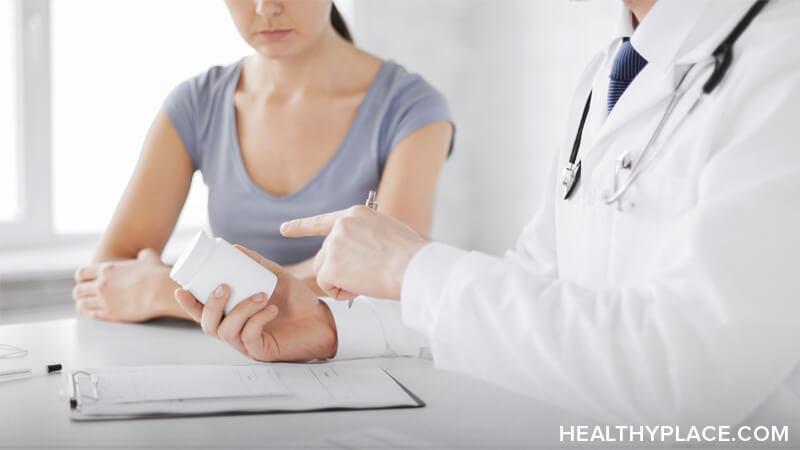 Everyone seems to have an opinion about how to treat bipolar disorder. And while doctors have good reasons for their beliefs, others have formed their beliefs about bipolar disorder treatment mostly on hearsay, rumor and myth. You know the kind of thing: “Oh, I hear that Jenny’s friend’s roommate had bipolar and fixed it by exercising five days a week,” or “I read on the Internet that bipolar disorder is actually caused by taking antipsychotics.”

Sure. No problem. I hear random anecdotes and webpages also have the cure for cancer.

And this doesn’t take into consideration all those of an antipsychiatry persuasion who will tell you how evil psychiatry is en masse.

So basically, what I’m saying is that criticism about bipolar disorder treatment can come from anywhere, anytime and for any reason. And, thus, it is very common.

My feeling is that when someone criticizes you for treating your bipolar disorder in a certain way, you can either fight them on it or ignore them. Both of these are the right response depending on the situation.

Fighting someone’s criticism of your bipolar disorder treatment can be a useful reaction if the person really is trying to be helpful and is basing his or her opinion on some random mythology. You can often combat these people and ideas with science. Educating someone on the realities of a brain disorder can bring them onside.

On the other hand, if you run into rabid antipsychiatry, anti-medication or anti-treatment folks, your arguing with them will likely just make you crazy. You’ll go around in a circle. You’ll try to use logic. It won’t work. You’ll just feel battered at the end of it. Take my advice and just ignore these people. They are not worth your time or effort.

The Important Thing to Remember About Bipolar Disorder Treatment Criticism

The really important thing to remember about bipolar disorder treatment is this: you and your doctor are the only people qualified to make assessments about your treatment. That’s it. Just you and the person who intimately knows your medical history. Period.

The important thing is not to let criticisms about your bipolar disorder treatment make you alter a perfectly good treatment plan. If someone else has a point, discuss that point with your doctor. But don’t let some random person’s criticism of your bipolar treatment affect your dedication to getting better. Don’t let criticisms make you waiver from what you know to be true for you.

Remember, if you had cancer, people wouldn’t direct you to not get chemotherapy, and even if they did, you wouldn’t listen because you would believe your oncologist’s recommendation over someone else’s. This is exactly the same. You are getting the treatment you need for your bipolar disorder based on medicine and science. And that beats anecdote and myth any day.

Hi, everyone. Just found this website and have devoured it. Great information, and a great relief to know there's a whole community of like-minded people out there.
So... I have bipolar I, diagnosed in 1972 (well, of course it was called manic-depressive in those days). I've been hospitalized many times but always achieved stability on meds and returned to work. Anyway, I was in the hospital in March of this year, followed by a fairly extensive leave of absence. I think my coworkers were told that I had a personal emergency, because nobody really questioned my absence when I returned. I work in a hospital, so my privacy was closely guarded.
The psych hospitalization itself was a good experience...great facility, good doctor, etc. On returning to work, and under the influence of a great many medications, I spontaneously confided in one of my coworkers. I told her that I had had a bipolar meltdown, to which she replied, "Yeah, that's a lot of drama. I was sad once but someone recommended soaking in a lithium solution. I tried it, and it worked, because I never had a problem again! Really, you should try that instead of taking a month off work." Ouch.
Here's the thing. I should know better by now. I've been dealing with this for 40 years, but...well, there's always that little nagging doubt that...well, maybe it's not true...maybe I'm just making excuses. My face flushes with shame every time I think of how she brushed me off. Why, oh why, would I have confided in someone whom I suspected would respond that way? I didn't even give a long-winded explanation; I was pretty straightforward and wasn't asking for sympathy, understanding, or advice; I was just sort of matter-of-fact, no big deal. I mean, I'm not ASHAMED of it, and at my age it's not likely that my career can be derailed. Still, she reinforced the fear I have that if I just snapped out of it, and stopped being so extravagantly self-indulgent, life would be better. And maybe less inconvenient for others.

Yes I thought science would help us find a blood test that helps us know what medicines will work or not? I can relate to the above comment but our body and brain is changing all the time. So really what med to stick with can be a hard choice. I think the author of this blog is trying to get us to see that others don't have all the facts and experience of the disorder and its just hard not to tell them off. We get ill and we need a doctor. I'm on a healing journey myself and do my own research I guess there's no exact science. We just cope. We are resilient.

I used to work with an obese diabetic woman who lost a lot of weight. She had her stomach stapled and was put on a very strict diet by her doctor. Over time her doctor was able to reduce her medication because her blood sugars improved as a result of the massive weight loss, healthy eating and a number of other healthy lifestyle changes. However this did not last forever because she didn't have the discipline to stick with these healthy lifestyle changes. Eventually she ended up on extended sick leave as a result of diabetic complications and then had to retire on a disability pension.
In comparison...
I've been through a number of different trial medications for my bipolar in the past. It was hell but eventually I reached one I was willing to live with. After I was relatively stable, I was able to focus more on the holistic approaches such as a healthy diet, regular exercise, good sleep hygiene, stress reduction (meditation), coping skills, (CBT therapy, counselling) etc to support my new found stability. These non-medicinal holistic approaches enabled me to reduce the amount of medication that was necessary (and therefore most of the side effects). That's why non-medicinal holistic approaches to bipolar are so important to me. They're a great motivator. I don't want to go back to all the medication I was on before because that was a living nightmare!