Bipolar Primes You to Focus on the Negative

Yesterday I gave a talk about bipolar disorder to a group of students in 11th grade for the Bipolar Disorder Society of British Columbia. I have given this talk many times and, in general, students love it. It might just be because they get out of math class for the day, or, possibly, I do a good job. Who can say?

We get feedback from every teen we give this talk to. After the talk, I review all the feedback and make sure there are no issues with it (such as a teen in immediate need to help). And yesterday, one of the feedback forms called me an ego-stroking b*tch.

And, I have to say, this never happens. The students are normally a very good audience and their feedback is usually quite genuine. Sometimes they have a comment on something they think can be improved, which is entirely legitimate, but never, has anyone called me a b*tch before.

Out of the class of 30, that was the only negative thing. But it’s the only thing I can think about. Between my bipolar obsessiveness and my depressive negativity, I seem to be solely focused on the negative.

I Know I’m Focused on the Negative, Irrationally 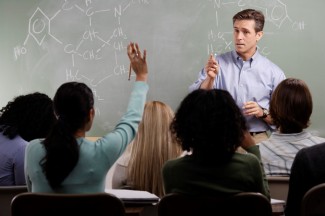 I know that focussing on the negative like this is silly. Teens love us. Really, they do, and the other 29 pieces of glowing feedback prove that. I’m sure this particular student was just having a bad day, or is having problems at home, or had an emotional reaction to the subject matter. I understand all this. This comment was considerably more about the person who wrote it than it was about me.

Nevertheless, this comment is stuck in my mind and that’s because my bipolar depression has primed me to focus on the negative and the bipolar, in general, tends to obsess on – often negative – things. It just part of how the bipolar brain works. And I know it.

But What about the 29 Other Positive Comments?

In the other comments I got called things like “strong” and “inspirational” and these words are great but somehow my bipolar brain places less meaning on that than the nasty ones. This is a prime example of the way our thinking keeps us depressed and it’s a train of thought that cognitive behavioral therapy would have us identify and fight.

And, of course, I know this. Nevertheless, the words are still rattling around in my brain. Which I think just goes to show you how powerful bipolar disorder is. It works against logic and therapy and your own mind.

But knowing all that is, at least, somewhat helpful. Because at least and I can recognize the flawed thinking. Even if I can’t seem to change it.

Tags: focus on the negative

APA Reference
Tracy, N. (2014, May 13). Bipolar Primes You to Focus on the Negative, HealthyPlace. Retrieved on 2023, January 27 from https://www.healthyplace.com/blogs/breakingbipolar/2014/05/bipolar-primes-you-focus-negative

I taught in high school and I would never take that comment personally. Either this person was trying to be funny or they were having a bad day or just immature or angry with the world.
But I understand the point you are making and I have a tendency to put too much focus on the negative parts of my life when in reality much of it has been good compared to the rest of the world. I ask myself why I m so upset over a negative comment or action when there are people dying of cancer or living in poverty.
Like a Jack-in-the-box the negative pops up and I have to push it back in the box, but the latch is broken and the negative keeps popping back up as soon as I take my hand off the top.

Natasha, Give a Home Work to the student to list down 5 points that justifies his/her belief. Next, sit with her to evaluate each of his/her points. If s/he cannot sit with you. Reply him/her in written with your evaluation. I think this will make you feel better that you were able to correct something that was going against you belief.

Melissa, my OCD compells me to correct your "vitreolic`' to "vitriolic"... People hate me for correcting them but I can't help it! (Former teacher & translator)
I agree that BP people have raw nerves. We hate criticism & rejection. Yes, one negative can outweigh many positives, which is wrong. Perhaps the student who used the "b" word was over-sensitive because he or she suspects that BPD is his or her problem/diagnosis.
Carry on, Natasha, undeterred! You are our champion!

I'm certainly no Pollyanna, but negativity always traps me in depression so I do my best to avoid it

I think life experiences in general can sometimes make me think and feel negatively. I had a step father who used to belittle me (he called it teasing, but it went way beyond that). He was one mean s.o.b. I believe having bipolar disorder also does a number on our self esteem because of the stigma associated with it. Being aware of where our sensitivities lie can help to understand why we get so caught up in ruminating or obsessive over the negatives. Believing in yourself is key to overcoming that... I know, I know, that's easier said than done when we may feel insecure or a little self conscience to begin with

People with Bipolar disorder are often living with emotions in the open. I think they feel more, especially when there are negative feelings - kind of like a heightened sense of empathy. In any case, consider that the teen may have some diorder her or himself. Often a vitreolic response indicates a personal similarity that they aren't capable of addressing. In addition, consider that the teen is simply oppositionally defiant. My children (as I did) will argue with just about anything - especially if it sensational. If you had presented a talk on how great life is....the teen would have had the same response.

I think it's natural to focus on the negative. We all have a deep urge to be liked. You shouldn't let one negative comment ruin the good you do. I am married to a bipolar man and the stigma attached makes me so sad. I have no one to vent to or just talk about because of this stigma. Telling someone he is bipolar instantly taints their view of him, which is so unfair. I think the work you are doing is great. Keep your chin up.
http://zebrabrie.wordpress.com

I used to work in a high school. If was kind of a promotion when we earned the honor of being called that name (and much worse names) by our problem students. I am certain I would have been more upset about it if all the other teachers weren't so open and congratulating me! :) So, congratulations, without even being a teacher, you have earned the honor!

I love this post. Because I endure this almost every day, though I am still trying to fight the process of focusing on the negative. My bipolar journey is long and I am just now "coming out" so many of my friends are now sensitive to my bipolar and encourage me the best they can, support me a lot. But if I get one negative feedback or comment from a customer or co-worker at my job, it thrusts me into a negative place that is hard to break out of for a while.
Thank you for posting this. It was really timely for me!

I asked my spouse about this and he says I am like this too, but he doesn't think that it has anything to do with bipolar. Some people just don't have much of a shell. I try hard to do a cognitive override and remind myself that some people are just jerks, and eventually it does work. If I have severe depression, it wouldn't work at all, but I rarely leave the house when I am like that. Sorry you got that abusive feedback.

You touched one of the little critters. Your talk let the child externalize what is usually suppressed in the depressed personality. You achieved success at the cost of your own self esteem. Celebrate, commiserate, but don't take it personally. Without objectivity you may just as well be the 'biaci'. Worse yet, not much help... Be aware not offended.

Thankyou I enjoyed reading your piece. I am awaiting a bi-polar diagnosis and it's exactly this obsessive/compulsive thought process I'm struggling with. I too have the awareness of negative thoughts and behaviours but seem nevertheless powerless to stop them. Your experience following the student's feedback may not have been one of your best but at least it has enabled your experience to reach out to someone in the UK. Wishing you strength and happiness in the future, warm regards Karen x

Natasha - I think it's human nature to focus on this type of negative comments. (I would be obsessing about it too.) In reality though, ego-stroking b*tch is not how you come off in your writing and I'm sure that's not how you come off in person. It's a flip comment that is likely all about the person who wrote it and not about you at all. Although we all know these things logically, these comments still hurt and I sure wish that people were more considerate ...