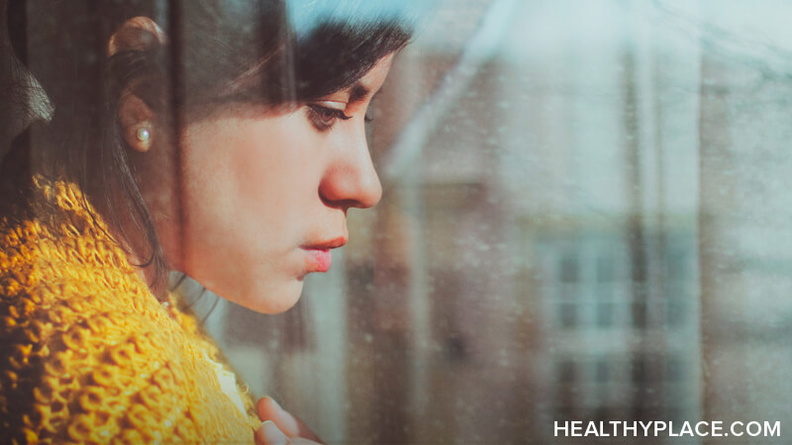 Why Diagnosing Mental Illness Via Brain Scan Matters and Why It Doesn’t
Bipolar Disorder and Comorbid Borderline Personality Disorder
Comorbid Eating Disorder
June, 11 2016 at 9:37 am

I still take my medication as prescribed for my bipolar 1 diagnosis, well sort of. I stopped taking the antipsychotic because it caused a massive weight gain that was starting to affect my mobility. In the beginning it was a good add on to the mood stabilizer I was also taking that helped reduce my depression symptoms but because the weight gain was so intolerable I stopped taking it.
Going off the antispychotic helped me to lose some weight but to accelorate the process I also became anorexic eating less than 500 calories a day and losing over 70 pounds in 3 months. My skin became very dry, my hair starting falling out, I felt dizzy all the time and one time I even passed out, which can be very dangerous when you live alone like I do. I find myself sleeping as much as I ever did on the antipsychotic but at least I am not getting fatter off it. Both anorexia and antipsychotics mess with your energy and metabolism. Being diagnosed with bipolar disorder and told you will have to take medication for the rest of your life that also causes massive weight gain can severely mess with your self esteem because of the unbearable stigma associated with both

Thank you for this video. As someone with bipolar, this gives me a greater understanding of the multiple health problems I have. I keep myself well-informed, but some of your information like bipolar's relation to obesity being genetic, I was not aware of. I lament my weight, and find it almost impossible to change, and I do have many of the comorbid conditions you mentioned. My father had OCD and I also did not know this was related. I am fortunate that early on I had counsellors that I trusted to keep me away from addictions - but I struggled here, too, in my 20s. I am also diagnosed with borderline personality disorder, too. I try to be positive, but these many illnesses physical and mental are challenging and hard to relate to others.

Peace Natasha,
Thanks for the excellent information. My marriage is marred by this very subject. My wife is a alcohol abuser (in denial) and has been diagnosed with BD. She's been seeing a psych for nearly 2 years, but her abuse has not slowed down. Her mental state changes rapidly so my son & I have learned through experience when to back off. It was recommended that I attend AA meetings (on my own) to see how those with the disease think & maybe it would help with our daily dealings. My study on BD & addiction has helped me get an idea of what she's going through.
Thanks again

hi natasha,i have been reading your blog for a while now very helpful, i met a friend in nicotine anonymous last year she has yet to quit smoking, is bipolar and takes a lot of meds for that,we became good friends, i help out a little by talking her to dr. apointments,the store, a little money, going to meetings,talking on the phone, she now has joined emotions anonymous,she now tells me i don"t help her (understand her)like her new friends in EA do,if i say something she doesn"t agree with i get critisized,she is a wonderful person, if i can understand her illness, thats where this blog has helped,my problem is she is still smoking a lot,and i,m not doing good in this friendship latley,trying to be patient and hope some day she will quit her addiction to nicotine ,i agree with your vidieo that its almost imposible to treat the bipolar while being addicted to a substance ,a little response will help me so much,i have been reading miss cuckooo"s blog which has helped me a lot.she sugested i need some space,i found her blog through your website thanks george,