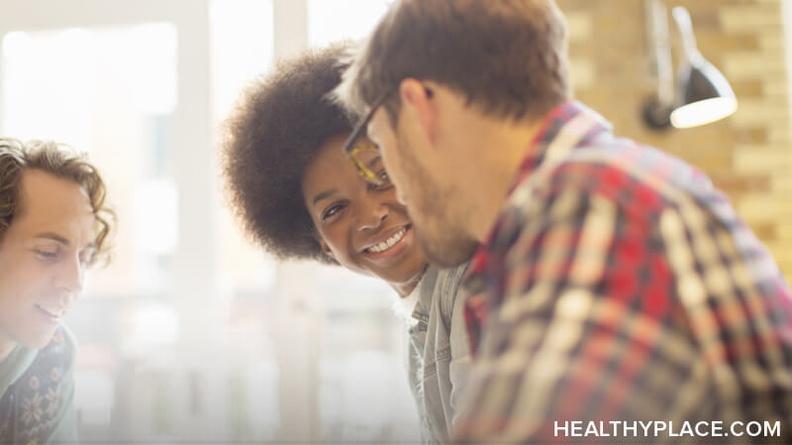 Come out, come out, wherever you are!

Yes, it’s Mental Illness Awareness Week again and if you’re here, at HealthyPlace, you probably already got that memo. But you might be wondering what to actually do to promote mental illness awareness. No art exhibit, educational session or candlelight vigil in your neighbourhood? Don’t worry – anyone can promote mental illness awareness just by talking about mental health.

I’m bisexual. It’s not a big deal; it’s just what I am. But like with mental illness, I had to come out of the closet about it. I had to actually sit people down and say, “Look. Here’s the thing. Boys and girls are both in the mix, k?”

And some people didn’t like that much and I was forbidden with all due might to ever tell my grandparents (who still, to this day, don’t know).

But I increased awareness. My friends, who had never met a bisexual before, now had. And they now knew that bisexuals were normal people, just like everyone else.

In fact, you don’t even have to say you have a mental illness (although it’s rather freeing if you do). You can just share a fact or two about mental illness. The fact that you’re willing to stand in front of someone, eye to eye, and use the word “schizophrenia” or “bipolar” is more than many other people will ever do and it’s more than many other people have ever heard.

But I wouldn’t have that human face in my mind, nor have felt confident in breaking so many stereotypes without those people and those experiences. I have a lot to thank those people for. They came out of the closet with me and I’m all the better for it.

People Would Prefer to For You to Ignore Mental Illness Awareness

And yes, much like I was forbidden to utter words of bisexuality to my grandparents, some people would prefer that you stay neatly in a mental illness box that they can dust and put flowers on top of and no one has to talk about.

Mental illness awareness is powerful stuff and why would you let some tiny-minded person take that power away from you? Like I said, it’s not normally appropriate to wear a Bipolar Babe t-shirt (although, you know, cool on you if you do) but we all know someone we can talk to to bring just a little more truth into the world of mental illness. And, in the end, you’ll likely both be better for it.

The Problem with the “Faces of Mental Illness” Campaign
Handling Anosognosia – Neurological Inability to Recognize Your Mental Illness
kathy.brannon
October, 10 2012 at 3:56 pm

Like you said, you don't have to "self-disclose" every time. Cite a fact, tell an anecdote, talk about someone you know with mental illness. Every little bit helps. (And eventually you will find yourself self-disclosing....and it will be very freeing and validating -- and mind-expanding to the person you're talking to!)

I was recently hospitalized for depression for the first time in 10 years. I was admitted through the ER of the hospital where I work. I spent the first 15 minutes worrying that someone who knew me would see me. And then I decided, so what! I am not going to apologize any longer for this illness. Whoever sees me, sees me. It was very empowering.

What great information you bring to help all of us that struggle and survive bipolar..I think of Bipolar as a great blessing because of the creativity and the depths of water shallow and deep we swim everyday. Normal is overrated..tee hee

Bipolar babe t-shirt? Bring it on :)