Now, I won’t go on about how deplorable it is to egg on another person’s suicidal ideation or threat, but I do want to discuss why people ignore suicide threats.

Turning Your Back on Suicide Threats 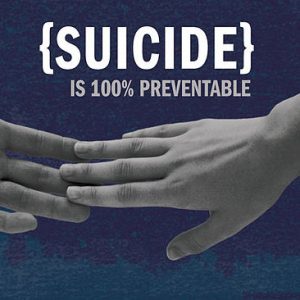 Recently I have come down hard on those who would ignore the suicide threat of their “friend” on Facebook. Personally, I see no excuse for this behavior and I think people should be ashamed of themselves for it.

However, there are reasons people ignore suicide threats.

1. They don’t take them seriously.

Again, I find it really hard to accept this kind of thinking. What right do you have to override what a person is saying and just assume they aren’t serious? Do you not realize the repercussions if you’re wrong? Do you really want to stake the life of someone on your ability to ferret out the “real” meaning behind a few characters of written word? Seems pretty silly to me.

OK, I do understand this. Some people really are at a general loss of what to do if someone threatens suicide. But seriously, all you have to do is search the Facebook help file for “suicide” or search Google for “suicide content Facebook” and you get information on how to handle it, so saying that you don’t know what to do is a bit of a cop out.

3. People don’t want to believe a suicide threat is real.

4. People don’t want to be bothered.

Again, human nature. People don’t want to admit it but they don’t want to take the time out of their busy lives to help another person. People will give another excuse like, “I thought they were kidding,” but what they really mean is they couldn’t be bothered. However, no one, and I mean no one, is so busy that they can’t take the time to report a suicide threat. After all, they are just checking their Facebook page, after all.

Helping Someone Who Has Threatened Suicide

Admittedly, dealing with suicidal threats can be very stressful. No one wants to know that someone is in the struggle for his or her life. And what’s worse, even if you do the right thing and call the authorities, you may never even find out what happened or you may be left waiting for days before you find out whether the person was OK.

The pressure it puts on your sucks. The toll it takes on you sucks. The worry it likely induces sucks. But no one ever said that being a good human being was easy.

The important thing to remember is that ignoring a suicide threat is never the right thing to do. Suicide threats should always be taken seriously even if they are online. You need to take the step to give out hotline number and call the authorities.

For a list of hotlines, please see this HealthyPlace resource.

For more on how to handle suicide threats on Facebook, see this article. (Note: this article is on my personal site which is in no way affiliated with HealthyPlace).

Bipolar and the Pressure to Get Better
Are Suicide Threats a Cry for Attention?
Frederic Dai
October, 24 2016 at 9:30 am

People that want to kill themselves are selfish. How many time have u seen accidents that involves people who wanted to die? They dont want to die alone! They drag others with them! That's why I have such a hatred towards these people and usually ignore them. You want to die? Go do it alone in a quiet area, I dont care. Dont endanger other people with ur selfish act.

This is the very reason people co.mit suicide. Because of people like you. Your post should be removed. I absolutely agree they should be er be so selfish to take another life with them. You sound as if every person who feels suicidal wants to take others with them. WRONG. WAY WRONG..Just like any other way you should die via being murdered or a car accident there are always evil souls in the mix. What your saying is completely uncalled for and I hope one day that doesn't bite you in the rear.
Most people who comit suicide are talked about at their funerals as being some of the most loving kind souls, who would do anything for anyone. These people have been hurt so badly they can't handle living in a world with so much pain. They feel everything. Your comment will get millions to. Jump off a bridge. Goes to show you and everyone what we are teaching about suicide is making it worse. For a moderator to even let your comment post to public is down right wrong.

Hi Tiffany,
I appreciate your concern. I agree with you that few people who are suicidal would even think about taking another person with them.
That said, the commenter does have a right to their opinion and to express it, no matter how much I may disagree with it.
Thank you for chiming in; I appreciate it.
- Natasha Tracy

I feel even more sucidal wow these comments and the careless of when someone who deals with a lot of mental health and more disabilities. Mental health is ignored especially more when you have no friends or family I don't make excuses everyone has a story but I totally understand anyone with mental health issues is obviously a waste a space to people so sorry if it's selfish or people can't understand it what to learn or don't know what to do is why most people don't say anything I thought reading this article will help but it's clear to me everyone opinion isn't what you need or want to see . Its my fault for even having little hope to answers.

Hi Alaze,
I'm so sorry you're finding these comments unhelpful. Please understand that everyone has an opinion -- that doesn't make them right, and that doesn't mean that everyone else agrees with them either. Please understand that many people _do_ care about those with mental illness. Many people _do_ care about those who are suicidal. Just because they aren't making a major presence known here doesn't mean they don't exist. I see these people every day. Please know that they are out there.
-- Natasha Tracy

I find it very sad and so confusing that a mental health professional can still ignore the distress.

Hi,
There is no such thing as an "easy suicide method." Everyone of them is painful, hard and harmful whether it works or doesn't to you and all those around you.
Please reach out for help: http://www.healthyplace.com/other-info/resources/mental-health-hotline-numbers-and-referr…
- Natasha Tracy

I was searching for easy suicide methods and i came on this!

[...] the full article via Why Do People Ignore Suicide Threats Online? | Breaking Bipolar. Share this:Like this:LikeBe the first to like this. Posted in: Health, Social Media, [...]

I agree. I always think it is very sad when people either egg on people who are suicidal on the internet (see this ALL the time in Yahoo! Answers) or dismiss the person as undeserving of life anyway. Part of me has always wanted to understand why people think that ingnoring someone's plight for life or desperation for death is acceptable. In my books however, it will never be acceptable. I know if some of my friends (ACTUAL friends, not Facebook "aqquantaincaes") hadn't of cared about me, then I would be dead.