Stigma is one of the most challenging aspects of mental illness. A report by the President’s New Freedom Commission states:

Stigma refers to a cluster of negative attitudes and beliefs that motivate the general public to fear, reject, avoid, and discriminate against people with mental illnesses. Stigma is widespread in the United States and other Western nations . . . It leads to low self-esteem, isolation, and hopelessness. It deters the public from seeking and wanting to pay for care. Responding to stigma, people with mental health problems internalize public attitudes and become so embarrassed or ashamed that they often conceal symptoms and fail to seek treatment. 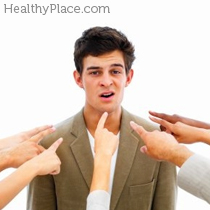 So how do we fight stigma? Here are ten ways from Dr. Otto Wahl of George Mason University:

What are you doing to reduce stigma?

What a T-Shirt Taught Me About Group Therapy
Government Aid, Stigma, and Mental Illness Treatment
Jacqueline
July, 28 2014 at 4:44 pm

A great big thank you! Also Belonging to NAMI is a good idea, it helps families understand and keeps you all together! Some can get well again and there is help for all who need it! One step at a time! Thanks, Jacqueline

I know people shy away from the "conversation" of mental illnesses. So often it is too late to save a person that has been manic or depressed to the point of suicide. If we can pick up on certain behaviors from these "Friends, Loved Ones, Family" then we can save lives. I think a lot of people have some treatable form of mental illness, be it small or big, it is there.
Nathan Hamilton diagnosed 2001 at age 30 bi-polar type I with psychotic features, I take 500 mg Serequell, and 6 mg of Invega (top treatment for schizophrenia. I deal with issues every day but often symptoms are reduced thanks to therapy and meds.