If you haven't seen Kristen Bell's take on a minimum wage versus a living wage, you need to. But regardless of where you stand on the issue, there's a side that isn't being told--life below the poverty line while on Social Security Disability. Did you know that a person with the maximum disability benefits receives less than a full-time minimum wage earner? Or that 80% of mental health consumers are unemployed?

My Experience with Government Aid 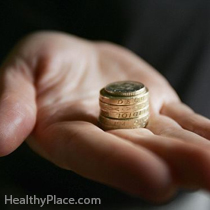 Meanwhile, I was hospitalized without insurance, which wiped out my life savings. At a lawyer's advice, I burned through my assets--most of it going to bills from said hospitalization--and went on Medicaid. Sadly, this had its drawbacks--I could no longer pay on a sliding scale, but I had to pay a government-set fee for treatment. This was often more than I could afford since I was not working. So I cut back on treatment, which caused me to get worse.

Once I was on Medicare and Medicaid, I could afford treatment. It came at a cost, however--an asset limit. I can not accumulate more than $1,500 worth of assets, and I can not make more than $65 a month without risk of losing my benefits. As my meat-and-potatoes conservative father said, "It's perpetuating. You have a $400 car which doesn't run, so you can't work, and you can't get a new car because you'll lose your benefits."

The stigma has even infiltrated the mental health profession. A psychiatrist once told me, "That's more money than I receive from the government." She didn't understand that I barely have enough to live on.

Our society is supposed to have a safety net. But often it turns into a hangman's noose.

Borderline personality disorder, or BPD, is an expensive diagnosis. Medications are pricey--mine cost a couple thousand per month. In addition, a person with BPD is often a heavy user of mental health services. Inpatient hospitalizations are common, as are frequent counseling sessions and a need for case management services. If self-injury is present, visits to the emergency room can occur. Mental illness treatment is expensive, and often it results in the person merely marking time.

The stigma of mental illness combined with the stigma of poverty can be internalized and cause mental health symptoms to worsen. In my active addiction, one of the reasons I drank was to forget I was disabled, unemployed, and poor. I couldn't stand the fact that my life was not what I wanted. The drinking and the internalized stigma sent me into a tailspin, resulting in a court-ordered visit to the state hospital for 13 months. Many people there had the same story.

But there is hope. I quit drinking and learned positive coping skills to replace the self-harm. Medication and therapy helped me come to terms with the mess that was my life and helped me make it better. Things can change if you're willing to work.

I just want to correct one thing- 80% of mental health consumers are not unemployed. That study was looking at people at public mental health clinics. People with jobs probably are not going to those clinics. I went to those clinics when I was on disability. When I got off of disability and got private insurance I actually had to go elsewhere (they didn't take my insurance). So I went to a private psychiatrist. So those numbers are really skewed.