Self-Harm, Hoffman's Death and Addiction: More Than a Habit

I’ve never been one to watch movies on a daily basis. Sure, I like movies, but I’d rather watch Big Bang Theory or How I Met Your Mother re-runs. Hell, I don’t even own a DVD player. However, I do appreciate good movies and the work that goes into making films.

Sadly, I only knew Philip Seymour Hoffman as Plutarch Heavensbee from The Hunger Games trilogy. I know he played numerous other roles and was an Oscar winning actor. However, after he lost his battle to drug addiction, it got me thinking about self-harm and how big of an addiction it is as well.

Yes, I believe self-harm is an addiction.

Self-Harm is an Addiction

Think about how difficult it is to put down a razor or scissors or a can tab when you are pointing at the edge at your skin. Think about the thoughts running through your mind when you’re about to make a mark. Those thoughts immediately take over your body and those negative voices typically end up overpowering the positive ones swimming in the back of your mind. Once those loud, negative voices convince you to move forward with the decision, it’s hard to stop your hands from also moving forward. 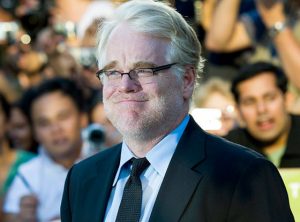 That is how I view addiction.

I’m proud to say that I’ve never had an issue with drugs. Sadly, Seymour Hoffman did and it was the drugs that took control of his final choice. Many people say it is the person who makes the decisions when it comes to any self-injurious behavior, including drug use. However, I think it is the addiction that makes the ultimate call.

Again, this is merely my opinion.

A Disney Star Speaks out about Self-Injury

Some people see those who gained fame from Disney as talentless. However, Demi Lovato is one individual who I see as an artist. Why? Because she has struggled with self-harm, an eating disorder and drug use and uses her struggles to educate youth through her music (and she actually CAN sing – again, my opinion).

She recently spoke out about Hoffman’s death and her view on addiction. “I wish more people would lose the stigma and treat addiction as the deadly and serious disease that it is,” Lovato wrote on Twitter. “Addiction is a disease. Please spread the word so we can take the taboo out of discussing this illness and raising awareness to people of all ages.”

Some people do not agree that addiction is an illness, but I am one of the people who agree with Lovato’s viewpoint. The community needs to start spreading more awareness of addiction, whether it is for drugs, self-harm or mental illness. Schools need to begin educating youth more about the seriousness of addiction so they feel more comfortable seeking help and speaking out.

That is one of the reasons I wrote Noon – to spread awareness.

I’m sad I only knew Hoffman for his role in The Hunger Games. However, it goes to show that even the best of actors can’t always act their way through their struggles. Sooner or later, that mask breaks.

Self-Harm and Karma: My Religion of Choice
Self-Harm and Preparing for the Unexpected (and the Expected)
Gary Ledbetter
February, 10 2014 at 8:30 am

Here in Canada addiction is considered a mental illness and falls under that treatment umbrella.