Is My Anxiety Caused By Motherhood or Mental Illness? 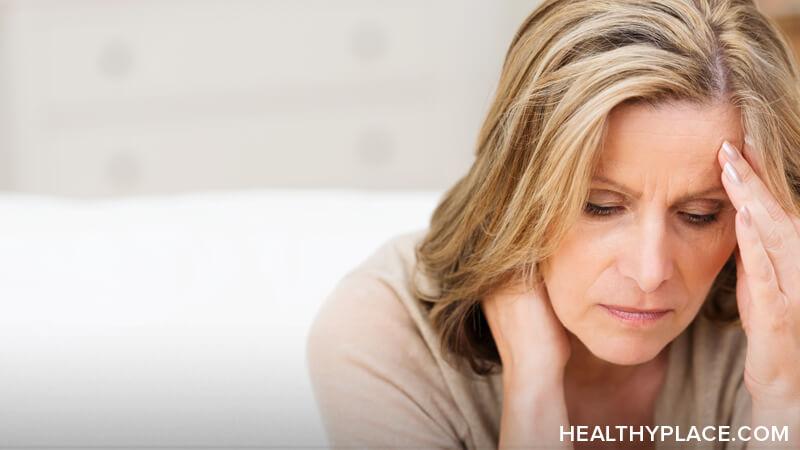 Is it motherhood or mental illness that makes me so anxious about my child? My daughter is two and a half, and I'm learning that oftentimes toddlers can be more difficult to deal with than infants. She's very mobile and vocal, and I worry all the time. I know it's natural for parents to worry, but how much anxiety is normal? Just about any thought involving the future makes me nervous. I don't know if every mother feels the same, or if my mental illness intensifies my fears. Maybe you can help me decide if my fears are those of motherhood or mental illness.

Are My Worries Based on Normal Motherhood or Mental Illness?

Here are just a few of the concerns that keep me up at night.

I worry about my daughter going to school.

I know it's a few years away but I always worry about sending my daughter to school. With every new story of a school shooting, my stomach sinks even lower. They just keep coming, and no one is doing anything about it. We didn't have active shooter drills when I was in school but that's going to be a reality for my daughter. This hit close to home last spring when an old high school classmate who is now a teacher survived a school shooting.

School shootings are not the only thing I worry about when I think of my daughter going to school. I worry about bullying, too. I was picked on occasionally as a kid but nothing too horrible or on a regular basis. I can't imagine the pain of a kid forced to go to school and be bullied every day. It's very scary that even elementary school students attempt suicide ("Suicide and Children").

Do I react so strongly to these stories because of my mental illness or motherhood? Is it normal for this stuff to keep you up at night?

I worry about keeping my daughter safe.

Next, I think about other aspects of safety. I can't take my eyes off of my daughter -- not even for one second. She has a habit of running into the street. Even though we live in a busy urban area, our house is tucked back into a neighborhood where thankfully our street isn't very busy. However, the main arteries of Toledo are very close by and I fear for the day she starts riding a bike.

I'm not going to lie, my husband and I have pretty horrible eating habits. I know we have to lead by example and change so she doesn't pick them up.

My husband is a fire and rescue dispatcher for the city and he leaves for work very early in the morning. I am usually on my own getting my daughter ready for daycare. Every single morning I have to wrestle her to brush her teeth. I'm really big on oral hygiene and I'm afraid she won't pick that up. Maybe it's a silly thing to worry about, but I don't know if this is my mental illness taking over or a normal part of motherhood.

I worry that my daughter isn't growing and developing on time.

Another nerve-racking topic is growth and development. My daughter is in the first percentile for height. It's not really that surprising. I'm only five foot and my husband is five foot five. Our whole family is small. However, her pediatrician referred her to an endocrinologist and we went to a few appointments. My husband was really skeptical but deep down I was worried that something might actually be wrong.

I took my psychiatric medications throughout my entire pregnancy and I used to wonder if they affected her. Now her body mass index (BMI) is normal, and as far as we know she's healthy. But in the back of my mind, I still wonder about my medications. This is an issue many women with mental illness have to tackle when deciding to start a family. I just hope I made the right choice.

I worry about my daughter's health.

Adding to that, I always worry about my daughter's health and I constantly ask "what if." No one is immune to getting a horrible disease like cancer. It can happen to anyone.

That's a lot of fear, but one thing I surprisingly don't worry about is passing on my mental illness. Actually, that's one thing I very rarely think of. The topic came up a few times while I was pregnant but I was quick to shut it down. I don't want mental illness to be seen as a death sentence. A diagnosis can certainly be a hurdle but it doesn't have to keep you from a happy life.

So is all this intense anxiety part of my mental illness or a normal part of motherhood? I will probably never have an answer to that question, but I will do the best I can to power through all the anxiety and be the best mother I can -- even with a mental illness.

What are your thoughts? Are my worries due to motherhood or manufactured by mental illness?

APA Reference
Rahm, M. (2018, October 17). Is My Anxiety Caused By Motherhood or Mental Illness?, HealthyPlace. Retrieved on 2023, February 6 from https://www.healthyplace.com/blogs/recoveringfrommentalillness/2018/10/is-my-anxiety-caused-by-motherhood-or-mental-illness

My Mental Illness Is a Huge Part of My Identity
Mental Health Workers in a 'Least-Livable City' of the US
Pamela Heisler
October, 18 2018 at 5:47 pm

I think your anxiety is caused by motherhood AND anxiety. You can’t separate them they go together. As a mother we will always worry about our children for our whole lives. However when mental illness is in the mix it becomes blurred which comes first are is most primary. I just know my anxiety/mental health becomes amplifyed when I worry about my son.

Hi Pamela! Thank you so much for your comment. I think you're right - both mental illness and motherhood cause anxiety, and I agree that they probably can't be seperated. My anxiety was definitely amplified as well when my daughter was born, and it has just stayed at that level. I always hope it will get easier, but you are probably right that it is lifelong. Take care.