Should People with Mental Illness Have the Right to Vote?

Many people live in these institutions for years and consider the facility their home. They want to cast their vote in their community-just as veterans living in veterans' homes or college students living on campus are able to do. Other residents of these institutions have no other address to use for purposes of voting and thus would be completely disenfranchised. The suit asks the federal court to enter a preliminary injunction prohibiting the Clerk of Jefferson County from removing voter registrations of residents using Madison State Hospital as their address and stop the enforcement of the Indiana law that permits such actions. 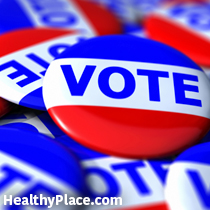 When I was a "guest" of the state in 2008, the hospital had a designated area where we were allowed to vote with minimal interference (that interference was staff explaining what we were voting for, like, "Do you want them to fix the schools?") Staff also ensured that we had voting material from each candidate so we could make an informed decision--incidentally, Obama filled out a rather lengthy survey detailing why we should vote for him while McCain did not. We are not criminals who have lost the right to vote--we are citizens receiving treatment. The fact that we are mental health consumers should not factor into our civil rights (Closure of Mental Health Court Makes Everyone A Loser).

Why the Answer Is, "Yes, People with Mental Illness Should Be Able to Vote"

Dawn Adams, Executive Director of IPAS, said in a statement:

This law singles out people in state institutions. It places a significant burden on residents' ability to vote, just because they live in a setting where they can receive the treatment they need. It is extremely disturbing that anyone would be denied their right to vote because of where they live. Voting is every person's constitutional right--to actively participate in their government. This law prevents hundreds of citizens of Indiana from potentially participating in our democracy.

When I was a child, I watched a court television show in which two homeless men sued the city they lived in to be allowed to register to vote. I remember thinking it wasn't fair of the city to deny these men the right to vote just because they lived in a public park. They won the case, and, according to the media, had not missed an election since the court ordered them registered as voters. This needs to be the case not only in Indiana, but nationwide.

The plaintiffs in this case have voted before while using the hospital as their address. Indiana does not do well at keeping registration records up-to-date--I got summoned for jury duty in Indiana while living in Georgia despite having my registration in Georgia--and one poll worker said that even if you were dead you stayed on the rolls. This action was calculated to target mental health consumers. That's particularly galling.

Equally galling is the fact that no one seems to care. When our dense Governor Mike Pence signed legislation allowing private businesses to discriminate against gay individuals, there were protests, marches (I literally carried a flag at one), and we became the number one Twitter hashtag: #BoycottIndiana. Here we've got something a bit more severe than one's choice of pizza and no one raises a fuss.

Once again, stigma rears its ugly head, forcing us to ask, "should people with mental illness have the right to vote?" in 2016.

APA Reference
Oberg, B. (2016, February 29). Should People with Mental Illness Have the Right to Vote?, HealthyPlace. Retrieved on 2020, August 10 from https://www.healthyplace.com/blogs/recoveringfrommentalillness/2016/02/should-people-with-mental-illness-have-the-right-to-vote

How to Confront an Animal Hoarder
Three Things Suicidal People Don't Know About Suicide
Renita
March, 1 2016 at 1:18 am

It seems to me the main concern is whether or not a person is mentally competent to vote.
If a person is in hospital suffering from a psychotic episode then obviously they are not competent but if they live there (say it is their home) and they are on medication and doing fine then there should be no problem.
It would appear that the powers that be are over generalizing that those who are in hospital are too sick period end of story and therefore incompetent which obviously is not the case in all instances. Would the same hold true for those who are physically incompetent?
It also begs the question what about high functioning retarded people who are not living in hospital but instead at home with their families. I think they should be allowed to vote too provided they understand what they are doing and why.